Panthers receiver carted off; player who hit him is cut 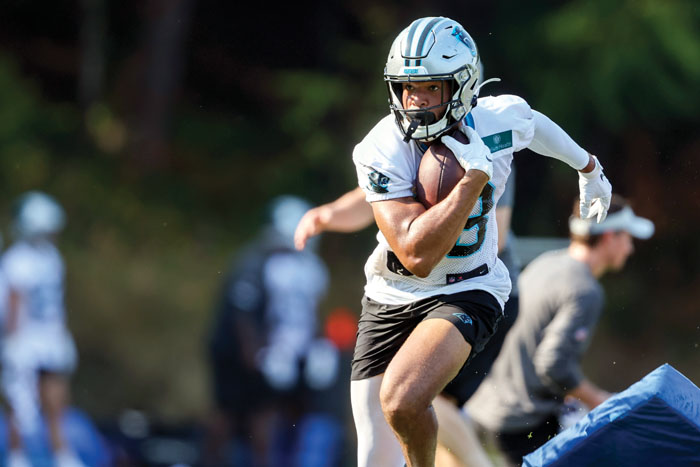 In this Thursday, July 29, photo, Carolina Panthers wide receiver Keith Kirkwood runs after a catch during practice at the NFL football team's training camp in Spartanburg, S.C. Kirkwood was hit in the neck area during practice Tuesday, Aug. 3, 2021, and was placed on a board and taken away in an ambulance. (AP Photo/Nell Redmond)

SPARTANBURG, S.C. — Carolina Panthers wide receiver Keith Kirkwood was hit in the neck area during practice Tuesday, carted off the field and taken away by ambulance. The player who struck him was kicked out of practice and waived.

Kirkwood sustained a concussion, was released from the hospital and is back with the team on the Wofford College campus, a Panthers spokesman said.

“It’s obviously precautionary and we will wait and see after he’s looked at what exactly (the injury) is,” Rhule said after the team’s first padded practice. “That was just the early signs. … I’m anxious to see what they say.”

Rhule was clearly upset when talking about the play by Ibe.

The collision halted practice for more than 10 minutes as the medical staff tended to Kirkwood on the field. Rhule gathered the players on an adjacent field and spoke to them while Kirkwood was placed in the ambulance.

“It’s completely unacceptable to do something like that,” Rhule said. “There are bang-bang plays that will happen and guys will hit the ground, but you can’t tee off on somebody. That’s not what we do and that is undisciplined by us and can’t happen.”

Rhule spoke just moments before it was announced the team had waived Ibe. The Panthers have not released a statement from Rhule or general manager Scott Fitterer on the decision.

Ibe spent four seasons at Rice and two seasons at South Carolina and was trying to make the Panthers roster as an undrafted free agent. He had signed with Carolina in April.

Kirkwood twice broke his clavicle last season and was limited to one catch for 13 yards in one regular-season game. He played his first two seasons for the New Orleans Saints and also played for Rhule at Temple.

“It’s a sad, sad part of the game and we have to do a better job of taking care of each other out here,” Panthers quarterback Sam Darnold said. “It was a hard lesson that we learned today.”

Panthers left tackle Cam Erving said it was difficult to resume practice after Kirkwood went down, but said it’s something a young team like the Panthers needs to learn to do.

“We don’t want anybody to get hurt or things to happen like that, but it’s about sudden change and adjusting and having to move forward because if something like that happens in a game, God forbid, we still have to go out there and play,” Erving said.

In other injury news, rookie running back Darius Clark was carted off the field with an unspecified injury. Linebacker Shaq Thompson and cornerback A.J. Bouye did not practice while they recover from minor injuries.

Erving: my job to lose

Although the Panthers are giving Taylor Moton reps at left tackle, Cam Ervingviews the job as his to lose.

“That’s how I see it,” Erving said. “I approach this camp and this season with a different focus. I’m trying not to worry about the outside noise or worry about what’s going on with the media or other guys, but focusing on me and making sure I get better every day.”

Erving has been working as the team’s first-team left tackle at practice, but Rhule hasn’t dismissed the idea of Moton, who signed a four-year, $72 million extension this offseason, moving to the left side.

The offense had a bad practice on Monday that included turnovers and receivers running wrong routes. But Rhule said after watching the film that Darnold “was the least of our issues.”

“I think Sam is doing really well and he’s evolving and growing and getting good reps and getting a lot of different looks,” Rhule said. “For the most part, he’s protecting the football.”