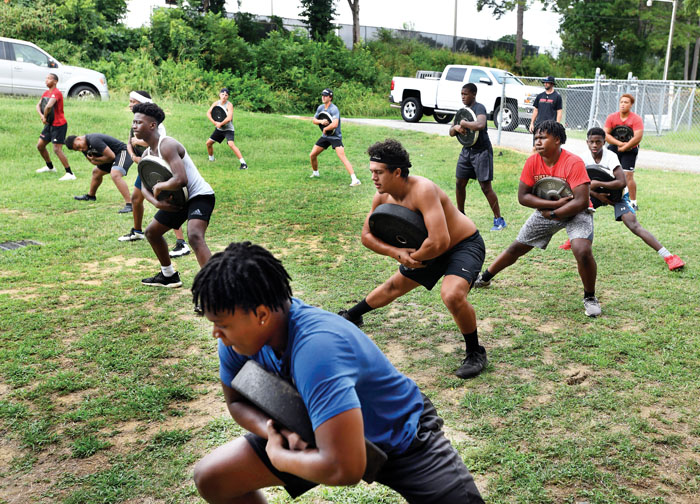 Salisbury High football team was divided into 3 groups to keep the numbers low with each group moving from station to station. Here they are doing exercises and using 45 pound weights outside. Azaevion Neal is in the front in blue shirt. photo by Wayne Hinshaw

The 2020-21 athletic season didn’t end until late June, but a return to normal sports seasons and normal-length sports schedules is planned for the 2021-22 school year.

Most athletic schedules have been released and coaches and athletes already are getting down to business. The first day of regular-season competition for fall sports arrives on Aug. 16, and sports such as volleyball will immediately spring into action.

The first regular-season football games are set for Aug. 20, although there will be scrimmages the week before that, including the Rowan County Jamboree at Salisbury High on Aug. 13.

Football regular-season schedules have been reduced to 10 games for the first time since the mid-’90s, so the regular season will end in late October.

The impact of realignment will kick in, in just a few weeks, and the standings in the Post will look odd for a while.

North Rowan joins Salisbury in a 1A/2A Central Carolina Conference that has been reduced in size as well as in power schools, with North Davidson, Ledford and Oak Grove moving up in classification.

South Rowan is back in 3A in the South Piedmont Conference, in an eight-team league (seven for football), and the Raiders once again will have West Rowan, Carson and East Rowan as conference rivals as well as county rivals. There should be great competition ahead, especially in sports where South excels, such as cross country, volleyball and baseball.

A.L. Brown is back in the 4A ranks, although it’s probably the friendliest 4A league the Wonders have been in so far, with no mammoth Charlotte schools to deal with, at least in league play. The Wonders are in a league that will be known as the Greater Metro Conference with Hickory Ridge, Lake Norman, Cox Mill, West Cabarrus, Mooresville and South Iredell.

The Wonders open at North Meck. The first conference game will be at Hickory Ridge on Sept. 17. A.L. Brown will finish with Concord at home. It’s a non-conference game this year, but it’s still Concord.

Life won’t change drastically for Davie, still 4A and still the outsider facing a Winston-Salem/Forsyth County group of conference foes.

There won’t be any subdividing of the football playoffs this season. No more 2A and 2AA stuff to worry about. Now you’ve got to beat everyone in the classification to be a state champion.

Speaking of state champions, Salisbury football earned that distinction back in May and has the horses to make another run at it.

Salisbury has added Polk County, a perennial playoff team, to its list of non-conference opponents. The Hornets will take on West Rowan, East Rowan and South Rowan before they head into CCC play.

Carson hosts Statesville to open the football season, so the Cougars aren’t ducking anyone. The Cougars start conference with West Rowan on Sept. 17. They’ll finish, fittingly, against neighbor South Rowan in what hopefully will become a long-standing tradition.

Davie opens at home against Mooresville, where head coach Joe Nixon was recently named to the staff for next summer’s East-West All-Star Game. Davie finishes the regular season at Glenn on Oct. 29.

East Rowan has old rival North Rowan back on the schedule and takes on the Cavaliers in Granite Quarry on Aug. 20. East has lined up a fast and furious finish, with Carson, South Rowan and West Rowan scheduled for the last three weeks of the regular season.

North Rowan should benefit greatly at the gate, as far as travel miles and in terms of fan interest with its new-look football schedule. The Chatham Centrals and North Moores are gone from the schedule, and the Cavaliers will battle East Rowan, South Rowan and West Rowan in the early part of the campaign. North will close with its biggest rival — Salisbury — on the road.

South Rowan offers an exciting football schedule that includes all five county opponents. The Raiders open at home against Parkland. After their open date on Oct. 15, they’ll finish up at East Rowan and at home against Carson.

West Rowan isn’t expected to have a single dull game. The Falcons take on Salisbury, Davie, Mooresville and North Rowan before they get to the conference portion of the season. New conference foes include Concord, Northwest Cabarrus and Central Cabarrus.

There should be plenty of excitement in all the fall sports, with everyone excited to be embarking on a full schedule of games at a normal time of year.

Panthers’ Chinn eyes ‘freedom’ at safety after move from…