These days at Waterworks, the walls have eyes 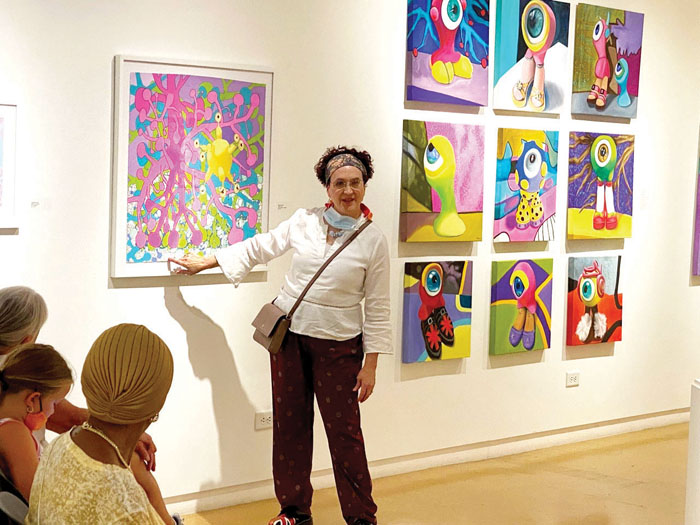 Artist Natacha Sochat has a 41-piece exhibit on display at the Waterworks Visual Arts Center featuring her paintings of “eye guys.”

“Art is part of public health. Rather than making people feel bad, I try to do it in such a way that it’s positive.”

So says artist Natacha Sochat, who now has a 41-piece exhibit on display at the Waterworks Visual Arts Center in Salisbury. It might seem presumptuous for an artist to make such a statement, but Sochat is uniquely qualified: In addition to being an artist, she is also a practicing medical doctor.

Born in New York City to a Cuban father and Puerto Rican mother, she describes her childhood as “full of disruption.” The family moved to Cuba in the 1950s, and young Sochat enjoyed living on her grandmother’s farm there. When Fidel Castro led a revolt against the corrupt existing regime, her father joined that revolution. But once in power, Castro decided the new government would be communist, and Sochat’s father would have none of it, so he moved his family back to America.

Yet, while they were in Cuba, her grandmother took young Sochat to a curandera, a spiritual healer, who told the young child she would someday be a healer, too. Years later, she did exactly that, getting her MD from the Boston University School of Medicine.

“But I was always an artist, even though initially I didn’t train as an artist. For our family, going to art school would have been considered a luxury.

Throughout her years practicing medicine, she continued her art. In addition to painting and sculpture, she made pieces of clothing and worked in photography. It gave her respite from the pressures of her daily life. But she realized that there was something missing from her art.

“Even though I had drawn all my life, I couldn’t draw exactly how things looked. Oh, they were accurate enough in terms of reproducing literally what was there. But I couldn’t draw exactly how things looked in real life. It was when I took classical art training that I had a breakthrough.” Sochat joined an atelier in Boston, studying with artist/teacher Paul Ingbretson, a leading exponent of the Boston School of American art and this experience influenced her way of seeing.  Taking art training at the Ingbretson Atelier “totally changed how I saw the light,” she said. “I was more able to capture what I was really experiencing.”

Sochat didn’t have an undergraduate bachelor’s in fine arts but rather in biology. But she laughs when she says, “When my children were in middle school, like so many kids that age, they wanted nothing to do with their parents. So, I took the opportunity to get my master’s in studio art (from Tufts University/School of the Museum of Fine Arts Boston).”

Through the years, Sochat’s art has focused on many different philosophical ideas. A couple of years ago, she had an exhibit of 32 pieces at Waterworks, all of which took the idea of retablos. Retablos is a religious altar or icon present in many cultures including Hispanic. In Hispanic homes there is a small area or shelf with religious objects and photographs of deceased loved ones. Sochat appropriated this idea and created non-religious retablos with other important ideas.

Her current exhibit at Waterworks centers on an idea that evolved into something she calls her “eye guys.” They are characters with one huge eyeball where a head would normally be, and feet. Sochat notes that feet — and footwear — have a huge meaning in our culture. Some of the eye guys wear boots, some wear high-heeled sandals, some slippers, and others have bird-like talons, rather than feet with toes. One of them has what appear to be horns coming out of the top of the eyeball, and another has long white arms. Looking at all the pieces — half of them oil paintings on stretched canvas and the other half are drawings in ink and acrylic on paper (some of them are little sculptures she makes out of cheap children’s clay to serve as models for the paintings), — one marvels at the extent of her vision. Clearly she is not one to make one piece of art from an idea and then abandon it for another idea.

The artist explains that she enjoys running with an idea as far as her imagination will carry it. “I do things in series. Sometimes I go somewhere with it that surprises me. These eye guys evolved from another series I was working on that I call ‘NeuroMorphic Universe.’ Several pieces from that series are also on display at Waterworks, and one can see small eyeballs on some of them. In fact, the 2019 exhibit of retablos included some pieces with the NeuroMorphic tree concept.

“They look like trees with limbs and branches, but they also look like something that, as a doctor, I am also used to seeing. They’re like the way nerves are distributed in the body. They can be either macroscopic or microscopic, depending on how you, the viewer, want to see them. And sometimes, when flying in an airplane, I look down and see that the earth reminds me of what is in the human body, that same design, and I wonder if the entire universe is like that, using the same designs over and over. I like that my art can have a multiplicity of meanings. The eye guys were a way of seeing what was going on in our world from many perspectives.”

In discussing her influences, she also mentions Japanese art, including woodblock printmakers Hiroshige and Hokusai.  One of her earlier NeuroMorphic trees on display at Waterworks attests to that, for it includes an octopus that is reminiscent of a famous Hokusai print with such a creature. And when one views it, it is the creature’s eyes that captures the attention.

Much of Sochat’s work is done in ink and acrylic, but she also works with oil paints. She says, “I love drawing with ink because it’s like life — you can’t erase it. When I do my ink drawings, the one I always think of is Dr. Seuss, even though my drawings don’t look like his.”

Perhaps the artistic style is different, but the creator of hat-wearing cats and flying elephants would certainly relate to the eye guys. Viewers of Sochat’s creatures at Waterworks universally declare the characters to be positive, making people feel good — a spirit which aligns perfectly with that of Dr. Seuss.

View Natacha Sochat’s artwork at Waterworks Visual Art Center at 123 E. Liberty in Salisbury, Monday through Friday, from 10 a.m. to 4 p.m., from now until Sept. 3.