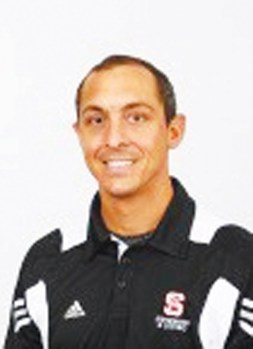 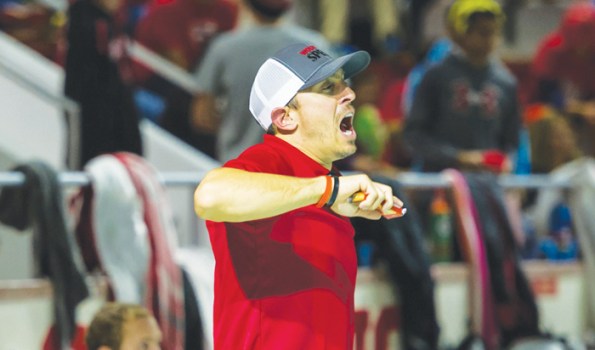 N.C. State sports information PHOTO ... Todd DeSorbo, former star at Salisbury High School and the Rowan Aquatic Club, has been named head swimming and diving coach at the University of Virginia. He had been associate head coach at N.C. State.

TOKYO — Alex Walsh and Kate Douglass were fast and furious finishers for medals in the 200-meter individual medley on the fifth day of swimming competition at the Tokyo Olympics.

Walsh touched the wall in a PR 2:08.65 for the silver, while Douglass’ PR of 2:09.04 was good enough for the bronze. Both are among the 10 all-time fastest American women in the event.

It was the first time two American women had medaled in the 200 IM since Tracy Caulkins and Nancy Hogshead shared the podium in Los Angeles in 1984. Walsh, from Tennessee, and Douglass, from New York, are from the same college program, the University of Virginia Cavaliers. They have the same coach — Todd Matthew Desorbo, who grew up in Salisbury.

After guiding Virginia’s women’s swim team to its first national championship and being honored as national coach of the year, DeSorbo was named as an assistant for USA Swimming for the Tokyo Games. Training was conducted in Hawaii.  The Olympic Games pool competition began July 24 and concludes on Aug. 1.

Another Virginia swimmer, Alabama native Paige Madden, swam the second leg for the 4×200 freestyle relay team that set an American record in the event (7:40.73) and won silver medals.

There’s also Emma Weyant, an incoming Virginia recruit from Florida, who deferred going to college for a year to devote all her time to training for the Olympics. She won silver in the 400 IM.

So DeSorbo and Virginia may stay on top for years to come.

Success is nothing new for DeSorbo, who grew up as one of four siblings, including a talented trio who won state titles at Salisbury High. Tara (Class of 1994), Todd (1995) and Andrew (2000) all won individual state championships while competing in an era when 1A, 2A and 3A competed together in the state meet. Tara, who also excelled in cross country, won the 500 freestyle in 1992 and 1993 and went on to swim for Rutgers. Todd took three state titles, the 200 IM in 1994 and 1995 and the 100 free in 1995. Andrew was a two-time state champion backstroker in 1999 and 2000 before signing with George Washington University.

In 1995, Todd’s individual victories helped the Salisbury Hornets win the 1A/2A/3A state championship, still the only NCHSAA title by a swim team from Rowan County.

Todd was swimming competitively at age 6. His first Salisbury-Rowan YMCA coach was Phyllis Steimel, who had come to Salisbury from Camp Lejeune.

In the spring of 1988, DeSorbo made a splash at the “Crafted With Pride in the USA Invitational” that was held at Belmont Abbey and attracted 12 swim teams and 371 entries. His 50 freestyle time of 26.76 seconds broke a state age-group record that had stood for nine years. He also won the 100 free, two breaststroke events and the 100 and 200 IM races. He  settled for second in two butterfly events.

Four months later, he won five first places in the 10&under competition in the Long Course Championships held in High Point. At that point, he held North Carolina age-group records in four events.

By the summer of 1992, DeSorbo was the headliner for the Rowan Aquatic Club (RAC) in its battles with the Sharks Aquatic Club of Shelby and the Hickory Seahorses. RAC’s boys team won the Western Carolina Swim Association Championships, with DeSorbo winning four individual events. He broke meet records for ages 13-14 in the 100 free and the 100 breaststroke.

In the fall of 1994, as a Salisbury High junior, DeSorbo was presented with three All-America certificates by retired West Rowan Middle principal George Knox and RAC head coach Nicky  Rosenbluth. DeSorbo was honored for being ranked as one of the best nationally among YMCA swimmers in the 200 IM, 200 backstroke and 400 IM.

“Todd sets goals and doesn’t quit until he’s accomplished them,” Rosenbluth said at that presentation. “With his inner desire and determination, he will succeed in what he sets out to do.”

DeSorbo signed with the University of Kentucky in May 1995.

In the summer of 1995, DeSorbo led the RAC team to a ninth-place finish in the YMCA Nationals held in Nashville, Tenn. DeSorbo won the 200 IM in 2:09.21 and was one of six RAC All-Americans.

He had a terrific freshman season at Kentucky. He was the first Kentucky freshman to make the All-SEC team and was elected as a co-captain for his sophomore year.

DeSorbo transferred to UNC Wilmington prior to the 1998-99 season.  During his senior season with the Seahawks, DeSorbo was named CAA Championships Swimmer of the Meet in 1999 after winning titles in the 200 backstroke, the 200 IM and the 400 IM. He set school records in two events.

He graduated from UNC Wilmington in the summer of 1999 and from UNCW’s business school in 2000 with a master’s degree in accounting. He’d done some coaching at UNCW as a graduate assistant, but he went to work for a firm in Raleigh as a tax accountant.

In 2002, DeSorbo married Lauren Suggs, a Blowing Rock girl who had been a diver at UNCW.  They have a son, Jack, and a daughter, Cate.

Accounting was a secure way to make a living, but his competitiveness and the enjoyment he got from club coaching fueled a desire to try college coaching.

He was hired as an assistant coach by UNCW and spent five seasons there, working under Dave Allen. The UNCW men won the conference championship every year, while the women finished in the top three every year. DeSorbo was involved in every facet of the program.

DeSorbo earned a reputation as a high-energy coach and communicator and was regarded as an innovative thinker in the field of sprint training.

That led to his next opportunity at N.C. State, where he was hired with the title of associate head coach. He joined the Wolfpack in the summer of 2011, taking on the duties of recruiting, training and day-to-day program operations.

Among others at N.C. State, DeSorbo coached Ryan Held, a gold medalist in the 4×100 free relay in the 2016 Olympics in Rio de Janeiro. He also coached three-time national champion Justin Ress and NCAA relay champs in the 4×100 and 4×200. The NC State men ACC titles DeSorbo’s last three years in Raleigh, while the Wolfpack women captured the 2017 ACC title.

DeSorbo was hired as Virginia’s head men’s and women’s swimming and diving coach in August 2017.

Virginia’s women won the ACC title in his first season, while the men placed third in the ACC. The Virginia women finished ninth nationally.

In his second season, the Virginia women’s team didn’t win the ACC but moved up to sixth nationally.

In the 2019-20 season, the Virginia women won the ACC.  Madden was named ACC Swimmer of the Year. Douglass was the ACC Freshman of the Year and broke the ACC record in the 200 IM and the women’s 200 medley relay set the conference record.

Then the Virginia women reached new heights in the 2020-21 season, taking their third ACC championship in DeSorbo’s four seasons and winning the program’s — and the ACC’s — first national swimming title. Virginia won six events in the national championships.

Honors have poured in for DeSorbo, including the biggest one available  — CSCAA Women’s Coach of the Year.

DeSorbo has been signed to a five-year contract extension through the 2026-27 season that figures to keep him in Charlottesville for a while.

“Todd has done an amazing job of creating a culture of excellence in and out of the pool and we are very excited about the future of UVA swimming and diving under his leadership,” Virginia AD Carla Williams said.

“My family is loving Charlottesville, and we’ve quickly planted deep roots in the community,” DeSorbo said. “My wife and children are our biggest fans. I couldn’t be prouder to be entrusted with the keys to continue to drive this program, but I’m even more proud of what these student-athletes have accomplished, as they are the true driving force behind any success we’ve had.”