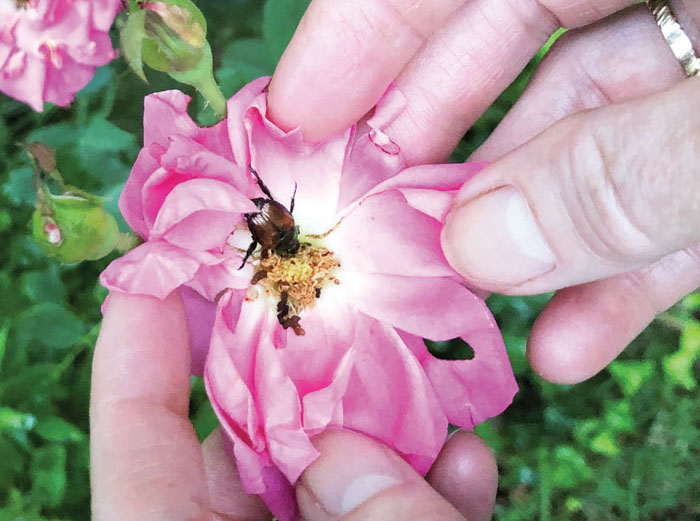 Japanese beetles have been a thorn in gardeners’ side for many years.

Nextdoor neighbors of my breakfast buddy had some insect problems with their flowers. Their canna lilies and roses were being quickly mutilated by a strange beetle. As it turns out, the beetle really wasn’t that unusual — Japanese beetles have been a thorn in gardeners’ side for many years. These pests damage roses, crape myrtles and other flowering plants including vegetables. These beetles have a wide host range-feeding on over 275 different types of trees, shrubs, and vegetable plants. One of the most recognizable insects, the Japanese beetle is oval, just under a 1/2-inch long with a metallic green body and copper-colored wings. The insect plays dead when disturbed for a few seconds only to resume its normal activity for foraging for food.

Insecticides containing Sevin can be applied as a dust or a liquid for immediate control; however, Sevin-based insecticides are highly discouraged due to toxicity to pollinators, especially honey bees. Japanese beetle traps can be implemented as an alternative control method implementing a pheromone (sex attractant) attracting the insect into the trap. Research has shown that Japanese beetles are attracted to bright colors, especially “John Deere” yellow. Unfortunately, the traps attract more beetles to the very plants you are trying to protect.

Hand picking the beetles is another method of control if the beetle population is not too large. Fortunately, most damaged plants recover soon after the initial invasion. Go to https://content.ces.ncsu.edu/japanese-beetle-1 for more detailed information.

Darrell Blackwelder is the retired horticulture agent with the North Carolina Cooperative Extension Service in Rowan County. Contact him at deblackw@ncsu.edu.