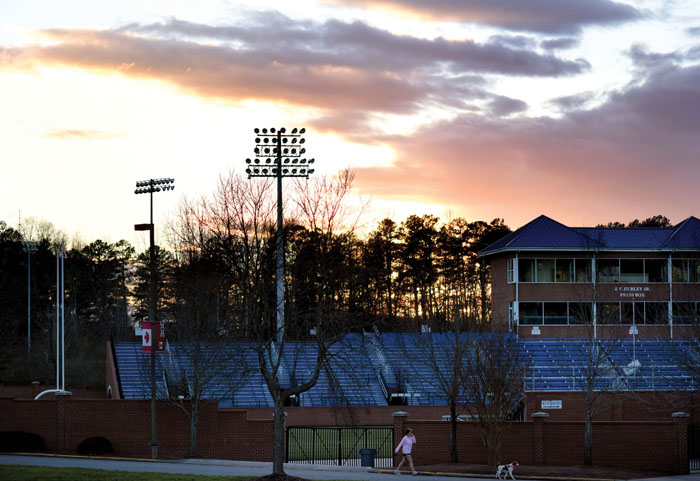 When the sun rises on the new football season at Catawba College, fans can expect a complete new look on the field. JON C. LAKEY / SALISBURY POST FILE PHOTO

After the two-game mini-season last spring, that heavy home schedule, including three straight home dates right at the start,  has excited a lot of football fans, a lot of Catawba fans and a lot of folks who are simply fans of life getting back to normal.

Catawba’s first football game (vs. Erskine) will be special. For most fans, it will be their first time seeing the new turf field and video board and hearing the new sound system.

Catawba’s second football game  and only night game (vs. Winston-Salem State) will the centerpiece of Family Weekend. The third game (vs. Barton) will bring former Catawba head coach Chip Hester back to Salisbury at the helm of a young program.

The Oct. 9 home football game against Carson-Newman will be held in conjunction with Hall of Fame Weekend.

Homecoming has been scheduled for the Tusculum game on Oct. 30.

Many of the 500 athletes who compete in Catawba’s 23 varsity sports benefit from scholarships.

Instrumental in raising the funds to provide 117 scholarships is the Catawba Chiefs Club, which has the goal of reaching 500 members before Sept. 1.

Henry C. Bernhardt, Class of 1950, is credited with founding the Chiefs Club in 1976,  when he was director of development at the college.

Forty-five years later, the Chiefs Club continues to carry on Bernhardt’s vision of an organization that promotes a spirit of camaraderie, goodwill and sportsmanship.

The Chiefs Club also benefits from the leadership of past presidents Don Don Clement, Bucky Cline  and Bob Setzer.

Members of the Catawba Chiefs Club receive a newsletter on Mondays with the past week’s results, upcoming games and special events, updates on athletic projects such as the renovation of Newman Park  and lots of pictures.  Chiefs Club members have use of the Catawba athletic facilities when available. Gifts are tax deductible.

The first Chiefs Club board meeting will be held on Tuesday, Aug. 23.

“Our Catawba Chiefs Club continues to grow with the loyal support from the Salisbury community and our former student-athletes,” said Jeff Childress, Associate AD for Athletic Development and director of the Chiefs Club.

. “We will also have a home cross country meet at Salisbury Community Park and home soccer, volleyball, and swim meets before we start up with our men’s and women’s basketball games in November. A very nice way to spend some family time together at a Catawba home athletic event.”