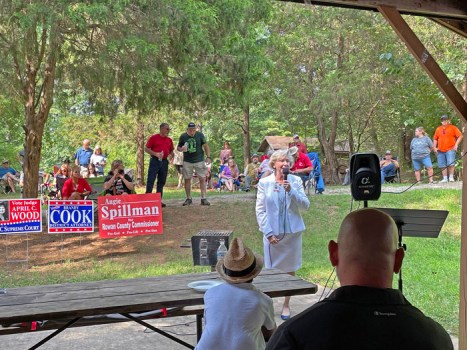 Natalie Anderson/Salisbury Post — Mayor Karen Alexander speaks about her platform and past record as mayor during a Republican candidate forum held at Sloan Park on Saturday, July 31, 2021. Alexander will face Mayor Pro Tem Al Heggins for the city's first mayoral race in November. 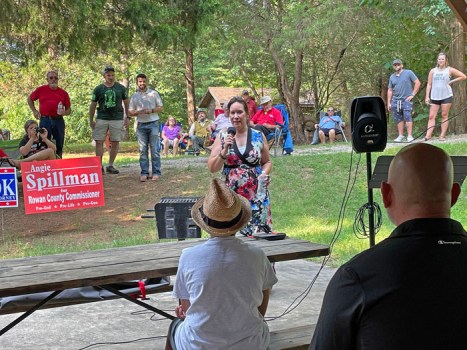 Natalie Anderson/Salisbury Post — Nalini Joseph, a Republican seeking the Salisbury City Council, speaks about her past experience advocating for children in the courts system during a Republicans candidate forum held at Sloan Park on Saturday, July 31, 2021. 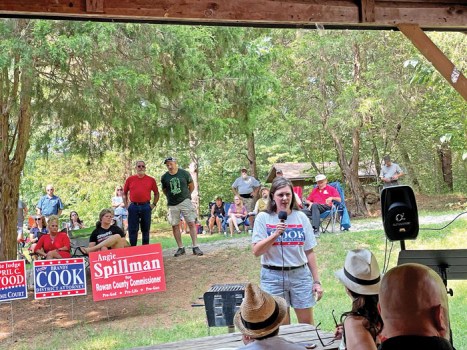 Natalie Anderson/Salisbury Post — Rowan County District Attorney Brandy Cook, a Republican seeking another term as DA in the 2022 election, speaks about her platform and past record during a Republicans candidate forum held at Sloan Park on Saturday, July 31, 2021. 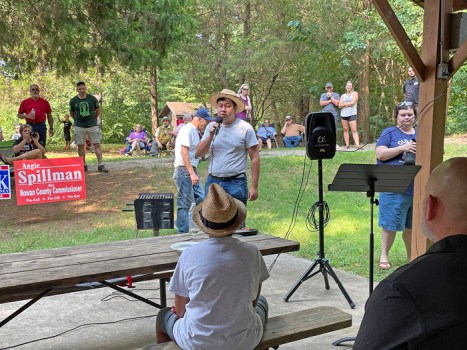 Natalie Anderson/Salisbury Post — Jonathan Barbee, a Salisbury resident who unsuccessfully sought election to the school board during thee 2020 election, spoke during the forum on July 31.

MOUNT ULLA — Dozens of Rowan County voters gathered at Sloan Park in Mt. Ulla Saturday to hear from candidates who will be on the ballot for the 2021 and 2022 elections.

Seats on every municipality’s town board or city council are up for grabs this year. Currently, 66 candidates are vying for 42 open seats. Early voting is expected to begin in October, with the Rowan County Board of Elections meeting Aug. 17 to vote on which early voting plan option will be utilized. A general election will be held Nov. 2.

In 2022, all Rowan County voters will have the option to elect candidates to the N.C. Supreme Court as well as for Rowan County district attorney, Rowan County sheriff, the Rowan County Board of Commissioners and North Carolina’s 13th Congressional District in the U.S. House.

Some of the voters who will cast a ballot in November and 2022 gathered in person Saturday to hear candidates in those races introduce themselves and their platforms as well as ask questions in a town hall-style forum.

Angie Spillman, who’s running for a seat on the county’s Board of Commissioners, said she spent the previous 12 years studying emergency management services, national security and terrorism, which has given her “a good idea of what we need in our communities to keep us safe.” She added that her platform protects Americans’ Second Amendment rights and all constitutional rights. She aims to change things without going against her conservative and Christian values.

“I’m not a politician,” Spillman said. “I want to go up there and teach the politicians what we want them to do.”

Brandy Cook, the county’s district attorney, is seeking her fourth term during in 2022 election. Cook spoke about her record of inheriting “the oldest backlog of cases in the entire state” from the superior court when she first took office in 2011 as well as her work to restructure the office, prosecute habitual felons and give victims the closure they needed from old cases.

N.C. Administrative Office of Courts General Counsel Trey Allen spoke about his race for the N.C. Supreme Court, noting that his love of God, family and America are core to who he is. Allen is a Marine veteran and former professor teaching regulatory and enforcement powers of local governments, local government liability and board procedures at UNC-Chapel Hill. Allen said he can stand for conservative ideals anywhere because he was a conservative professor at UNC.

Allen was asked about his thoughts on critical race theory, but the question was revoked once the person who asked realized Allen is limited in what he can discuss as a judicial official before reviewing legal cases. Saying that he was a father, too, Allen said critical race theory is why his five children are homeschooled.

April Wood, who won election to the N.C. Court of Appeals in 2020, is now running for N.C. Supreme Court as well. Like Allen, Wood was asked about critical race theory being taught in schools, and Wood said it’s why her children currently attend Christian schools.

“I’m going to tell you the most important things you need to know about me: And that is I was reared in a God-fearing, Bible-believing, Christian, conservative, military family.”

That Republican Rep. Ted Budd is running for U.S. Senate leaves an open seat for North Carolina’s 13th Congressional District. China Grove native Grayson Haff told voters Saturday he believes in investing in the nation’s K-12 schools with a focus on trade schools and local labor jobs that help the community. Additionally, he said it was time to “bring Christian values back to the forefront” of America.

“We have to focus on our own communities and grow them up and make them strong,” Haff said. “The best thing that we can do to do that is invest in our K-12 education in terms of teaching people stuff that actually matters — like learning trades, learning how run a business and not filling our schools with critical race theory and a bunch of stuff that doesn’t matter.”

For the first time, Salisbury voters will elect a mayor and members of the city council separately. Mayor Karen Alexander is being challenged by Mayor Pro Tem Al Heggins. On Saturday, Alexander said she believes in the U.S. Constitution and her principles are based in the Declaration of Independence.

“I also believe that I put my hand on the Bible and swore to obey all the laws of our community as well as our state, and I do that in everything that I do,” she said. “I’m a candidate that believes in God and family. I’m a woman of faith and I base my decisions as I deliberate on those principles I grew up with in a family of faith.”

Alexander noted her time advocating for the city on the state and national level, particularly when it comes to obtaining funds to assist with the community’s needs, included broadband and sewer and water infrastructure. Alexander fielded several questions related to the relocation of the “Fame” Confederate monument. She responded by describing the process that had to be taken once the statue was deemed a public safety hazard. Alexander also spoke about safety being a priority when she declared a state of emergency and enacted a curfew last summer after a protest near the Confederate monument. She attributed the protests to outside groups visiting the city with the purpose of causing destruction.

Jonathan Barbee, who unsuccessfully ran for a seat on the Rowan-Salisbury Schools Board of Education during the 2020 election, credited himself with a decade of experience helping his family business construct laboratories and classrooms across the East Coast and helping start the Rowan County Young Republicans organization.

“We were door-knocking all over the place for Donald Trump, and that election was stolen,” he said, which erupted an “Amen!” from the crowd.

Referencing a recent work-related trip to South Carolina, Barbee said the leaders who are elected should have more experience “sweating and bleeding like regular people.”

Nalini Joseph is an Indian-American candidate seeking the City Council. She has worked as an advocate for children’s rights in the court system for 30 years, with 14 of those with as district administrator of Guardian ad Litem Program.

“I did not come to the United States to be in a land of bondage,” she said. “I came here not for equity, but for equality.”

Jessica Cloward, the broker for Lantern Realty and Development in downtown Salisbury, said she is seeking a seat on the City Council to address the city’s homelessness and littering problems. She emphasized her love for Salisbury and added her aspiration to serve it “with her heart and soul.”

The City Council race is nonpartisan.

Local resident Dawn Stroud said she helped coordinate Saturday’s event, hosted and moderated by members of the local Republican Party chapter. Stroud herself is an unaffiliated voter, but said she wanted to publicize the candidates’ platforms and who they were.

“I think we had a great turnout. I’m extremely proud of everybody and the work they’re doing in the county and across the state,” Stroud told the Post. “I would encourage (voters) to get involved and get out in the community and talk to these candidates. They have websites and people should reach out to them and ask them questions.”

Editor’s Note: Due to a conflicting event, the Post was not in attendance for all of the Rowan County sheriff’s candidates for the 2022 election who spoke at the beginning of the forum. The Post will continue to cover the sheriff’s race and candidates as the election progresses.

This story was updated on Aug. 3 to clarify that Jessica Cloward is a broker with Lantern Realty, not the owner.  The Post regrets this error.