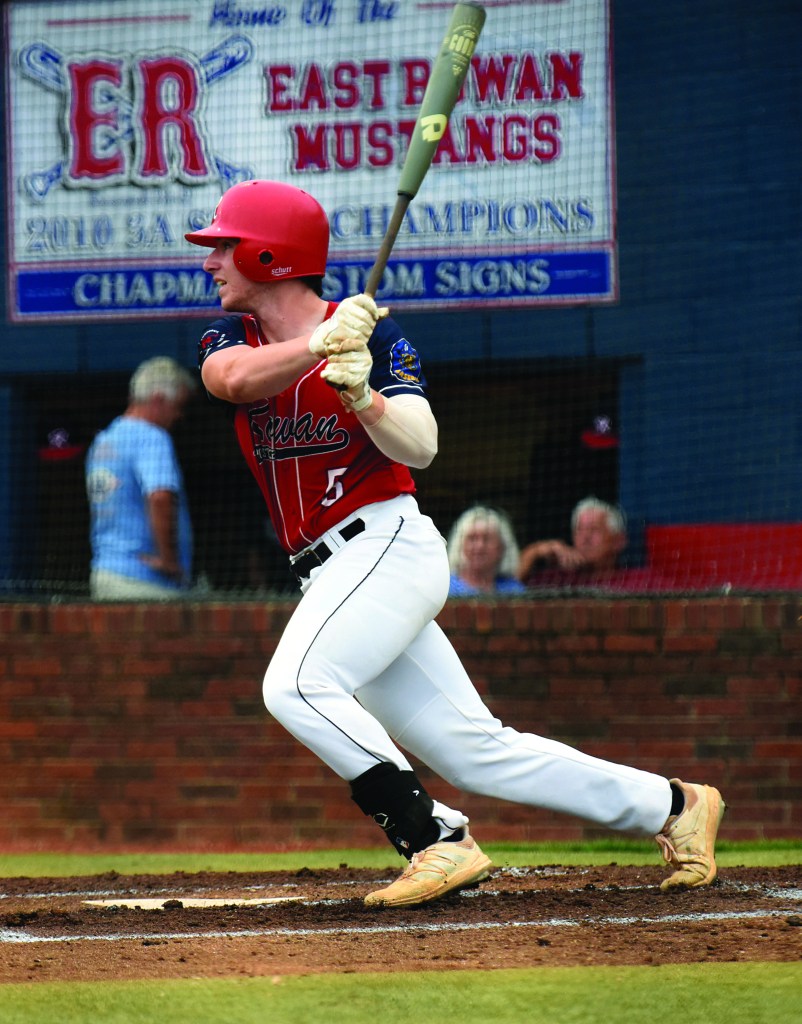 Rowan's Logan Rogers his a grand slam in the fourth inning to tie the score 5-5. File photo by Wayne Hinshaw, for the Salisbury Post

CHERRYVILLE — Logan Rogers’ opposite-field grand slam in the fourth inning lifted Rowan off the deck and back into the ballgame, but it was a temporary fix.

Rowan County fell 12-5 to Fuquay-Varina in a Saturday afternoon semifinal in the American Legion State Tournament being held at Cherryville’s Fraley Field.

Rogers singled on his final swing for Rowan County. He was 2-for-2 with two walks on Saturday, plus a diving catch in the outfield. He went 38-f0r-74 in the 22-game season to finish with a .513 batting average.

Rogers batted .293 with one homer in 30 NC3 games in 2020, but he was the Incredible Hulk, the Amazing Spider-Man and Captain America rolled into one after a year at Southeastern Community College.

Zach Smith’s .482 in 2010 has been the Salisbury/Rowan program record for a season. Smith broke the mark of Craig Powers, who hit .475 in 1997. Powers topped the .466 of Jerry Hillard in 1956, a remarkable mark achieved back in the days when the program played under the banner of Salisbury Post 14.

Arguably more amazing than his lofty batting average was Rogers’ RBI total of 49. That’s 2.22 RBIs per game. If Rogers had been able to maintain that torrid pace over a 47-game season, he would have collected 105 RBIs.

But this was an odd season that didn’t start for Rowan until June 19 and with home games played at Staton Field.

Rowan (16-6) squeezed everything it possibly could have out of the summer, but on the final day, with the notable exception of Rogers’ slam, it couldn’t get the key hit. Rowan left the bases full twice when it was still anyone’s game.

Fuquay-Varina, the home team, jumped out early 5-0, with two runs in the first and three in the second. Rowan starter Dylan Driver’s day on the mound was over after six batters, and he headed to right field.  Chase Drinkard replaced Driver on the hill. He threw strikes, but defensive mistakes hurt.

Rowan lost Charlie Klingler in the third inning. The carefree leadoff man, who has been on base all summer, was hit on the hand by a pitch and was in pain. He stayed in the game to run the bases, but he was replaced when Rowan went out on defense in the bottom of the third.

Jackson Humphries was the starting pitcher for Fuquay-Varina. A hard-throwing Campbell commit, he was tough to hit, but wild. He walked three in the first two innings, but Rowan couldn’t make him pay. In the third, he hit Klingler and walked three batters, but Rowan settled for a single run — when Rogers walked with the bases full. There were still no outs when Rogers trotted to first, but then three straight Rowan hitters went down quietly. Rowan trailed 5-1.

Rowan tried to swing the momentum in the bottom of the third when first baseman Jacob Causey — he had replaced second baseman Klingler in the lineup, prompting a string of Rowan defensive changes — made a snag and turned it into a twin killing.

Humphries continued to labor in the Rowan fourth, plunking Drinkard with a pitch and issuing his seventh and eighth walks. The eighth free pass was to CP Pyle, and that got Rogers to the plate for the second time with the bases loaded. This time, he unloaded them with his grand slam. That was Rowan’s only hit off Humphries, but just like that, it was 5-all, a brand new ballgame.

But Fuquay-Varina proved too strong to be shaken by one punch. Jonah Oster belted a two-run homer off Drinkard in the bottom of the fourth that proved decisive, while Nolan Connaughton, a 6-foot-8 reliever who will pitch for former Rowan County star Ross Steedley at Queens University, worked out of some trouble to preserve the lead.

Drinkard, who won for Rowan on opening night, won in the Area III playoffs and won in the state tournament, finally wore out in the sixth. That’s when Fuquay-Varina’s non-stop lineup pulled away with a series of hits off Drinkard and Kaleb Burleyson.

Besides Rogers’ single and slam, Rowan managed only one other hit. That was a single to right by pinch-hitter Blake Hill with two men out in the seventh. That was the last swing of the game, as Zander Burton, who had been hit by a pitch in a pinch-hitting role, was thrown out trying for third base.

Fuquay-Varina (17-12) will play for the state championship today.