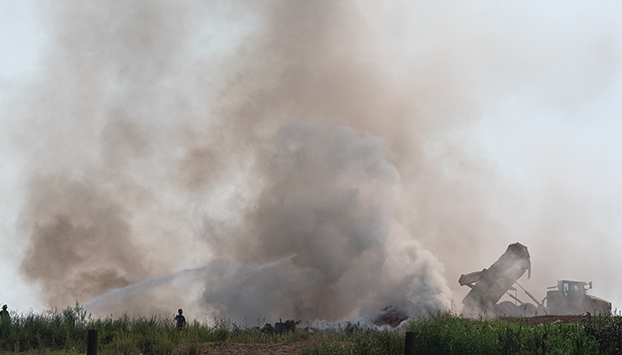 Josh Bergeron / Salisbury Post - In this image, two firefighters stand on the perimeter of the landfill as a truck dumps a load of dirt. A bulldozer later came to spread the dirt over the fire.

WOODLEAF — Local fire departments and landfill workers responded to a fire at the landfill off of Campbell Road on Saturday afternoon.

The blaze was reported around 3:45 p.m., which is after the facility closed for the day. Crews were still on scene Saturday evening.

It wasn’t immediately clear what started the fire, which occurred on the “working face” of the landfill where trash is placed. Split into multiple sections, other parts of the landfill close after being filled, said Rowan County Environmental Management Director Caleb Sinclair.

Crews used large trucks to haul dirt and smother the fire while spraying it with water.

No further information was released about the incident Saturday.