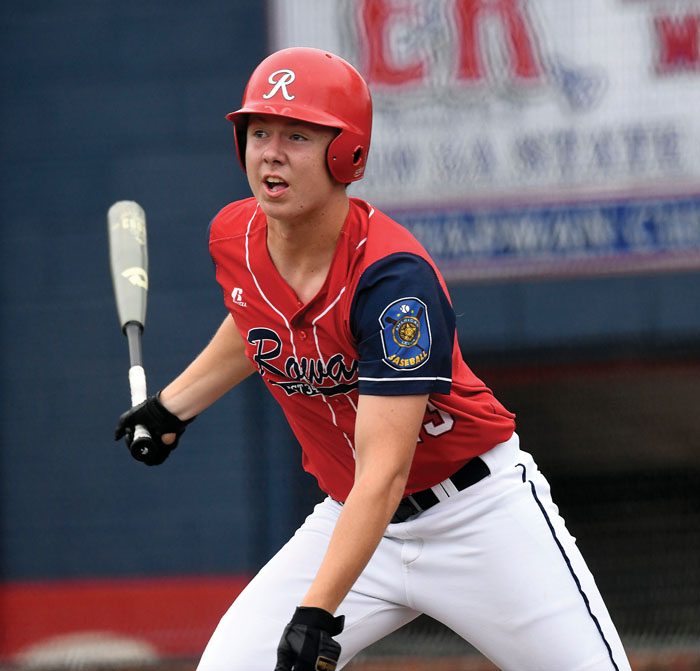 Aiden Schenck's triple put Rowan on the board but it was not enough Thursday night against Cherryville. File photo by Wayne Hinshaw, for the Salisbury Post

Rowan (15-5) collapsed defensively in the sixth inning as Cherryville poured across 11 runs to turn a competitive game into a 10-run rule romp.

The victory gave Cherryville the championship of the Stars Pool, even with a third day of pool play still ahead. Cherryville has beaten Wayne County and Rowan County, the two 1-1 teams that will be scrapping for second place in the pool today at 1 p.m. Cherryville will wrap up pool play against Port City (0-2), which has dropped one-run games to Rowan and Wayne. Port City rallied from a five-run deficit in the top of the seventh inning on Thursday to take the lead, but then couldn’t hold off Wayne County, which won 7-6 in the bottom half.

Rowan could only muster three hits against Cherryville starter and winner Joseph Webb, a craftsman who was in command for five innings.

Rowan starting pitcher Mattox Henderson (2-2) pitched well before exiting in the sixth. Cherryville inflicted most of the ugly damage after Rowan failed to get the third out on a pickoff, and then didn’t make the play on an infield popup.

Rowan missed a scoring chance in the second, stranding two after a hit batsman and a walk, and didn’t have any luck in the third inning when CP Pyle lined into a double play.

In the bottom of the fourth, Rowan cut its deficit to 2-1. Dylan Driver bunted for Rowan’s first hit. Aiden Schenck’s triple put Rowan on the board, but Webb got the next two batters out to strand Schenck at third and preserve the lead.

The top of the fifth provided separation. Again, Cherryville executed with small ball, piecing together five consecutive singles, including two perfectly placed bunt hits and a dinker over a drawn-in infield, to set up a four-run inning. After a bases loaded walk and a sac fly, the Post 100 lead was 6-1.

Then after presenting Cherryville with several extra outs, everything unraveled for Rowan in a marathon top of the sixth.

Peyton Summerall had a hit for Rowan.

Zander Burton and Blake Hill got to chance to pitch for Rowan in a state tourney atmosphere.

Henderson used up all of his pitches for this tournament, but will still be available as a pinch-runner or for some outfield defense.