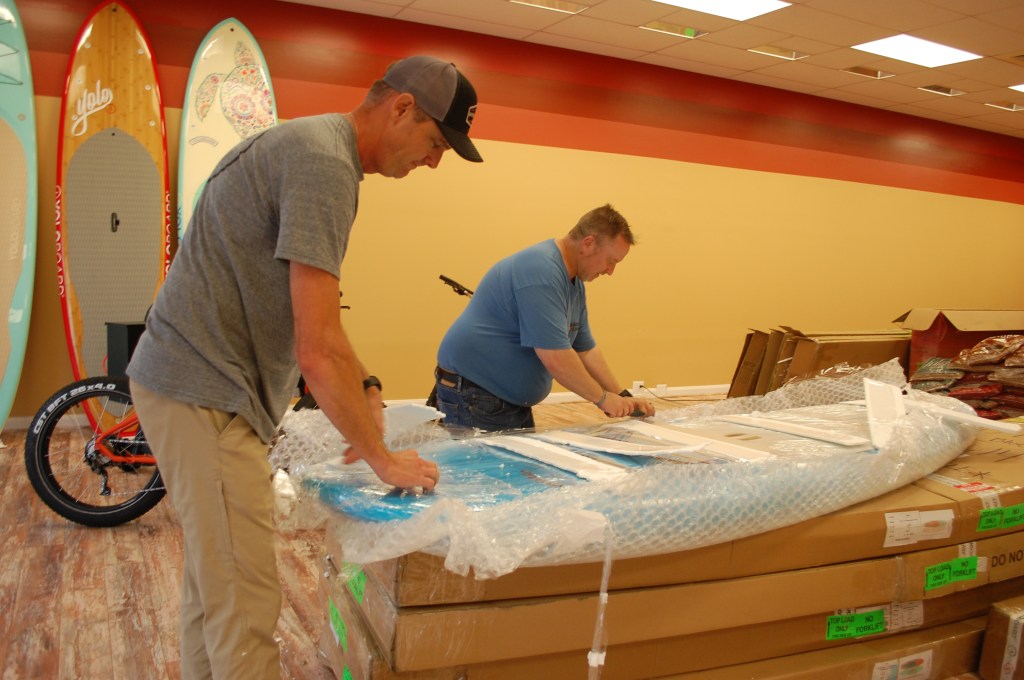 DeWitt Brown, the operations manager, and Jeff Moose, the owner, take a Yolo paddleboard out of its box at their outdoor store Backcountry & Beyond.

Moose and Brown, the owner and operations manager of Backcountry and Beyond, are moving the outdoor equipment store from its current location at 1301 E. Innes Street, Suite 101 to 322 S. Main St. next to Railway Crossfit.

Close friends since they met as freshman at the University of South Carolina, Moose and Brown decided to open Backcountry and Beyond almost three years ago. The goal, Moose said, was to build a store around brands people love in a central location between Charlotte, Greensboro and Winston-Salem.

“I got familiar with good brands that I thought were quality brands and I had an idea of putting some good quality brands under one roof,” Moose said.

Backcountry and Beyond’s move downtown was precipitated by both the need for more space and the desire for greater visibility.

“We’ve been able to outgrow our space and find a better position for us to be in more of a destination area in downtown Salisbury,” Moose said.

By moving to the former home of Home Town Furniture, Backcountry and Beyond will increase its square footage from about 2,800 square feet to 20,000 square feet. That additional space means a lot more room for more inventory.

“We probably won’t be filling that whole space up immediately,” Moose said. “But it gives us an opportunity to grow with more products. We have some future aspirations for the space to eventually have it filled up, but we want to take it small steps at a time.”

When the store opens, Moose said customers might notice a few new apparel brands. There are also plans to carry more camping gear and even kayaks, if Moose is able to get his hands on a few of the suddenly tough to find water vessels.

The biggest change that customers will eventually notice at the downtown location is the addition of an in-store coffee shop.

“Part of our plan and thought process is to give it more of a feeling of come in, hang out, spend some time in there,” Moose said. “It would give us an opportunity to sit down with a customer and have a cup of coffee and talk through the buying process.”

The coffee shop, Moose said, will probably be added long after the new store opens its doors.

In addition to more space, Moose said the downtown storefront will also give Backcountry and Beyond greater visibility. Although the store is currently located just off I-85, it’s tucked into a small shopping center that is frequented mostly by people dropping off packages at FedEx next door.

“We still get a lot of new people who come in on a regular basis that didn’t know we were there,” Moose said. “I think a lot of that is going to change with a move to downtown. We’re going to be a lot more visible and a bigger part of the downtown community.”

The fact that the store will be located within walking distance from Bell Tower Green park, Moose said, is “icing on the cake.”

Moose said he is targeting October for the store’s downtown opening, which will come right after the business celebrates its third anniversary. The space itself is in good shape and won’t need any extensive renovations beyond new paint and new flooring to give it a “fresh look.”

Since announcing the move on Facebook last week, Moose said the store has gotten positive feedback from its customers.

“Our customer base is definitely on our side about it,” Moose said.

More information about Backcountry and Beyond can be found online at www.backcountryandbeyond.com.