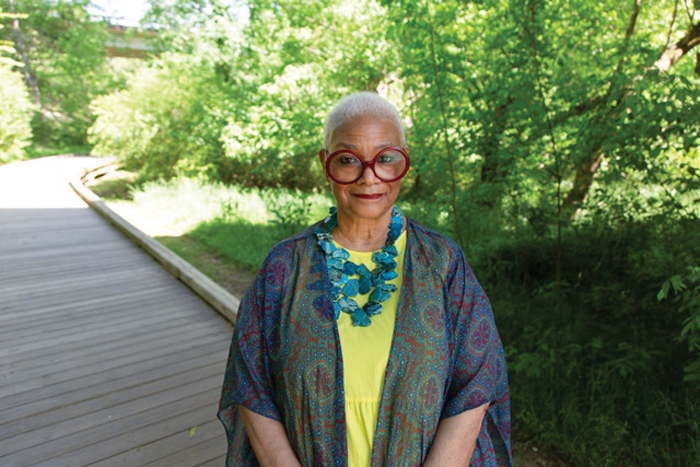 “It’s time to tell the truth about who we are as Black and White people in the United States. It’s time,” she says.

Green will share some of that truth here on Aug. 6 as keynote speaker for the opening service of  “Truth Be Told,” two days of events surrounding the dedication of a historical marker that memorializes six Rowan County lynching victims.

A self-described literary activist, Green has been called North Carolina poetry’s Billie Holiday, someone whose poetry issues “from a persona that unflinchingly peers into the heart of darkness and foreboding.”

She says she celebrates the people of Salisbury for undertaking the upcoming events.

“It’s important for this remembrance to happen,” Green says. “History is very, very important. If we can face our histories, if we can embrace them, if we can be truthful, then we can be hopeful.”

But, she says, hope for the future can’t be realized if it’s just an abstract concept.

“It only comes when we do the work, the hard work.”

Green, 68, has been doing that hard work all her life. Coming of age in the first days of school integration, she left Orange County High School after her advocacy for Black faculty and Black studies led to disciplinary action. “I had been taught to question wrong,” she says.

Instead, she completed her high school studies at the George School, a Quaker institution in Pennsylvania whose alumni include civil rights leader Julian Bond, composer Stephen Sondheim and actors Blythe Danner and George Segal.

Writing has been a constant in her life, even while helping low-wealth families through her work with government agencies and nonprofits, such as North State Legal Services.

Green has penned eight books of poetry, from “Masks” in 1981 to “I Want to Undie You,” a tribute to her late daughter, in 2017. In 2020 she released an album of poetry, “The River Speaks of Thirst,” which one reviewer said “laments the Black struggle for equality while celebrating Black resilience, wisdom, and creativity.”

Her work has won high acclaim, garnering dozens of awards and leading Gov. Roy Cooper to name her as the state’s poet laureate in 2018 and again in 2021 — the first African American and only the third woman to hold the post.

She passes on her art and wisdom through workshops, readings and, at the Duke University Center for Documentary Studies, by teaching documentary poetry.

She recently served as the 2021 Frank B. Hanes Writer in Residence at UNC Chapel Hill, which was a wonderful experience, she says.

She was shocked at how UNC handled tenure for Nikole Hannah Jones, a Black alumna and journalist who spearheaded the New York Times’ “1619 Project” on the role of slavery in American history. The board of trustees delayed voting on Jones’ tenure before ultimately approving it on a 9-4 vote. Jones opted to take a position at Howard University.

Green said it did not make sense to deny, as Jones’ critics seemed to do, the role that the arrival of the first Black enslaved people in 1619 has played in U.S. history.

“But it does make sense because this is who we are now as a culture. Racism is now sexy. Racism, classism, sexism, homophobia, things that we worked so hard (against). … Racism has been rebranded, repackaged, restructured.”

Inside these battles, though, a lot of learning takes place, she says, just as a lot of learning took place during the COVID-19 shutdown. People rediscovered what it means to be in family and in community, checking in on neighbors and helping people who were without resources.

Now, she says, it’s time for hard conversations — time to do the work, to look for spaces where people can come together.

But encounters don’t have to be confrontations.

She tells the story of looking over plums in a grocery store recently and finding the young man shopping next to her tattooed with Nazi and Confederate symbols. “It was a narrative,” she says, perhaps even a code to others of the same persuasion.

She started chatting with him.

“We had a wonderful conversation about plums,” she says. He asked what she was going to do with the ones she had picked out, and after she described baking plum halves — sprinkled with cardamom, nutmeg and fruit pepper, and later topped with a dollop of ice cream or yogurt — he brought his wife over to talk to her too.

Green says people can be completely different on the outside, but that doesn’t matter. We all share something. “It’s our humanity.”

When she writes poetry, she doesn’t want only Black people to get it, or only Southerners, only women, or only short Black women with curly hair. If so, she says, she’s failed.

“I should be writing poetry that speaks to the humanity of anybody. So the tall man in the back who looks nothing like me, the 85-year-old retired car salesman, he needs to get it too.”

She has had more than one older white man tell her how much he loved her poems about her grandmother. These are men, who have nothing in common with her, she says, men who might only have known Black women in positions of servitude. Yet they tell her the poems make them want to cry as they think of their own grandmas.

The first time that happened to her, she went to her car and cried, knowing she was doing what she was supposed to be doing.

An excerpt from “i know the grandmother one had hands”:

but they were always in bowls

but they were always under water

but they were always in the earth

She intends her poetry to be for everyone, not one narrow demographic slice. “I want to swim in the ocean, not the pool.”

There are so many stories that have been locked away, Green says, so many voices that have been, muted, erased, silenced. It’s time to speak the truth and to make a genuine effort to understand — “not just playing at it,” she says.

Not only is racism “sexy” again, in her view, but so is talk about fighting it.

Salisbury is attempting genuine action, truth-telling that is potentially dangerous, she says. “I know these small Southern towns. I’m them. They are me. They’re my people.”

But erecting a marker in a public space that addresses the issue of lynching could provide an educational opportunity so the next generation, as well as the current one, can build community differently.

“It’s a start,” Green says, “and I think it’s a very significant start, doing it together.”