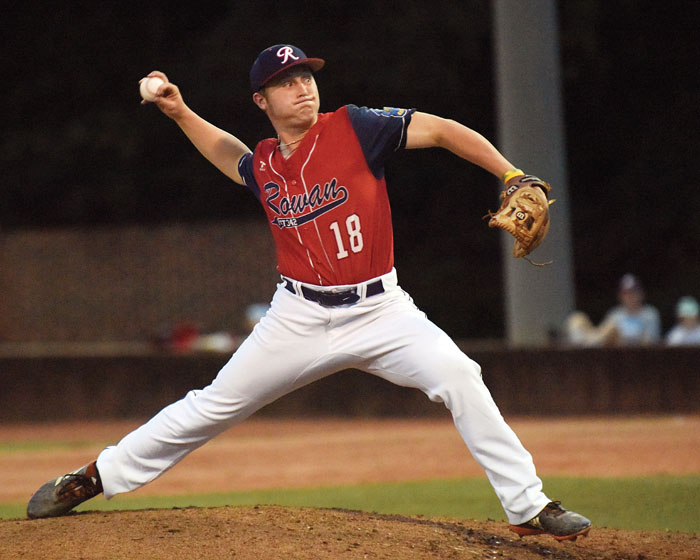 Rowan relief pitcher Chase Drinkard entered the game in the fourth inning and shut Port City down the rest of the way. File photo by Wayne Hinshaw, for the Salisbury Post

“When this season started, we were all saying we hoped we could win one,” Gantt said with a chuckle. “Heck, we meant one game. Now we’ve won one in the state tournament.”

Wins in the state tournament always are sweet, and this was Gantt’s 30th (against 13 losses). Rowan managed to edge state tourney newcomer Port City 3-2 on a warm, sweaty Wednesday morning.

Port City (10-4) is a fifth-year program that was originally constructed so that the guys who weren’t good enough to play for perennial power Wilmington Post 10 would have a place to play in the summer, but the program has made strides and now has some D-I talent.

A thin Rowan roster, anchored by three college rising sophomores, has been molded into a cohesive team by Gantt and his assistant coaches. Not great, by any means, but tough and resilient. This was a tough ballgame. Rowan found a way to hang on to it and to start pool play 1-0.

This is Rowan’s 12th trip to a single-site state tournament, a format that began in the summer of 2000, one year before Gantt was elevated from assistant to head coach. Rowan (15-4) has never gone O-fer in the state. That distinction will continue.

Everyone agreed the difference-maker amid the morning madness was relief pitcher Chase Drinkard. Drinkard (6-1) probably had his worst outing of the summer the last time he was on the mound — just couldn’t find it—  but on Wednesday he was at his best. He entered the game at the start of the fourth inning in a 2-all game and shut out Port City the rest of the way.

“Drinkard did a great job changing speeds,”  Gantt said. “His changeup really moves and it goes down. The change was a weapon for him today, and he went back and forth with the change and curve, and they make his fastball look faster. He kept them off-balance. He was good, the biggest reason we won the game.”

Most of Port City’s players come from Laney High in Wilmington, a school famous for Michael Jordan.

Port City put a terrific arm on the mound. Connor Kane, a young right-hander committed to UNC Wilmington, throws in the 90 mph range.

Charlie Klingler, the first man Kane faced, has no fear of anyone’s fastball. He doubled and came around to score on Logan Rogers’ groundout — Rogers’ 42nd RBI. Rowan made it 2-0 before the first inning was over when Austin Fulk walked with the bases loaded.

But Rowan left the bases full and then couldn’t score after CP Pyle and Rogers got solid hits in the second inning.

“Kane does have a very good fastball, but he was laboring early,” Gantt said. “We thought we had a chance to knock him out of there in the first or second inning, but he was too good to let that happen.”

Rowan starting pitcher Dylan Driver took that 2-0 lead to the top of the third, but that was a messy half-inning. It began with a walk and a hit batsman that put the two bottom men in the Port City lineup on base. A groundball got a run home and a wild pitch tied the score at 2-all. Driver needed  to get cleanup man Garrett Wolff out to keep it 2-all, and he did.

Drinkard replaced Driver, who headed to right field,  at the start of the fourth.

“The heat and the humidity were a factor, and Driver was struggling to find it,” Gantt said. “His tempo was unusually slow today and they were running on him. He was trying hard to find his way, but we felt like we had to go to Drinkard if we were going to win this game.”

It worked out. A lot of things went right, including Driver making all sorts of plays in right field. He made catches for all three outs in the fifth.

Drinkard got his Southeastern Community College teammate, Wolff, out to end the fifth with the bases loaded. That was the moment of truth.

The bottom of the fifth proved decisive. Driver’s bloop double with one out set everything up. When Aiden Schenck bounced back to the mound, Driver was hung up between second and third, but he’s quick and he escaped a careless rundown. Tristan Miller’s infield hit loaded the bases. Fulk’s bouncer might have been an inning-ending double play if had been fielded cleanly, but a bobble turned it into a productive groundout. Driver scored. Rowan led 3-2.

Drinkard did the rest. He pitched a 1-2-3 sixth. He allowed a soft, two-out hit in the seventh, but that wasn’t nearly enough to rattle him.

“I wasn’t used to this kind of heat (in a day game),” Drinkard said. “I tried to keep calm and collected and tried not to over-do it. When you over-do it, that’s when you make mistakes.”

Drinkard told the Memories 1280 radio crew that he was headed to the hotel hot tub after the game. He certainly deserved that treat.

One down, but still a long, long way to go.

On deck is a tough pool game, at 7 p.m. tonight against host Cherryville and in front of what is certain to be a vocal crowd. Mattox Henderson will start on the mound for Rowan, with Rogers ready to go behind him, and with everyone else — except Driver and Drinkard — ready to chip in.