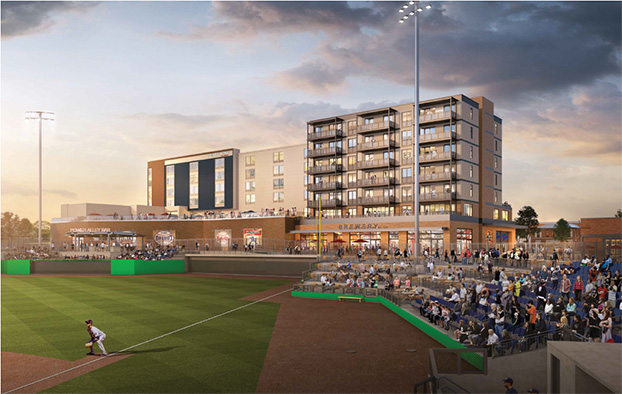 A rendering of the muti-use development planned for the property overlooking right field at Atrium Health Ballpark in Kannapolis. Photo submitted.

KANNAPOLIS — The city on Tuesday announced an agreement to provide three parcels of property past the right field wall of Atrium Health Ballpark to Right Field Development LLC as a development incentive.

The parcels of land, which are a combined 1.9 acres and have an appraised value of $1.69 million, will be developed into apartments, restaurants, retail stores, condominiums and possibly a hotel.

“This is a significant step in the City’s Downtown Revitalization Project,” Mayor Darrell Hinnant said in a news release. “These buildings will be key anchors due to their location overlooking the Atrium Health Ballpark and West Avenue. We expect they will also be popular because of the access to a thriving downtown marketplace. More restaurants, retail, offices and possibly a hotel will help our economy to continue to meet the needs of our residents and visitors.”

Right Field Development, the company behind the project, is composed of the Lansing Melbourne Group (which constructed the VIDA Apartments on West Avenue) and Temerity Capital Partners (owners of the Kannapolis Cannon Ballers).

The project will be completed in three phases.

Phase one will be the development of 0.362 acres known as Block 4A. It will include the construction of a seven-story building with offices, a restaurant, the offices of the Cannon Ballers team, ticketing space and five stories of apartments. The apartments will be called “Stadium Lofts” and each unit will have dedicated patio space facing West Avenue or the ballpark. Once completed, it will have a minimum tax value of $8.46 million.

“We look forward to starting these important new projects alongside Atrium Health Ballpark,” Andy Sandler, owner of the Cannon Ballers and partner in Right Field Development, said in the  release. “We expect to break ground within the next several months on Stadium Lofts, a multifamily residential project with high-end apartments, a street-level Cannon Ballers team store and a tavern eatery. Additional shops, more restaurants and a hotel and condos will soon follow.”

Phase two will be 0.879 acres known as Block 5 located at the corner of West Avenue and Cannon Baller Way. It will be transformed into 79 condominiums or apartments and first floor retail space with a minimum tax value of $20.33 million.

The third and final phase is the development of 0.591 acres known as Block 4B at the corner of West Avenue an Laureate Way. The block will be developed as either a 109-room hotel or a multifamily residential project with 48 units. It will have a minimum tax value of $11.34 million.

Approximately 300 additional parking spaces will be included in structured parking lots as part of the development.

Construction on the entire development must be completed by 2026 with a minimum tax value of $40.1 million. The next step in the process will be for Right Field Development to finalize and submit plans for approval and close on the Phase One property.