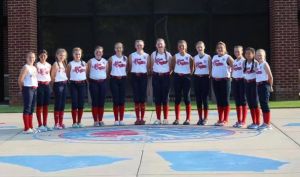 It was a big one, a 3-0 victory over Virginia in the winners bracket final.

Rowan’s opponent in the regional championship game hasn’t been decided yet.

Georgia and Virginia will resume their game this morning with a World Series berth on the line. After a 45-minute break, Rowan will play the winner for the regional championship and seeding for the World Series.

Rowan was the home team and scored in the bottom of the first. Myla McNeely tripled and scored on Leah Carter’s groundout.

Virginia threatened in the top of the second, getting two hits and advancing runners to second and third, but Poole got a strikeout to end the inning.

Rowan made it 2-0 in the second. Eva Shue walked, stole second and scored on Caroline Lyerly’s single.

McNeely, who had two hits and scored twice, crossed the plate again in the third. She singled, stole second and scored on a hit by Shue.