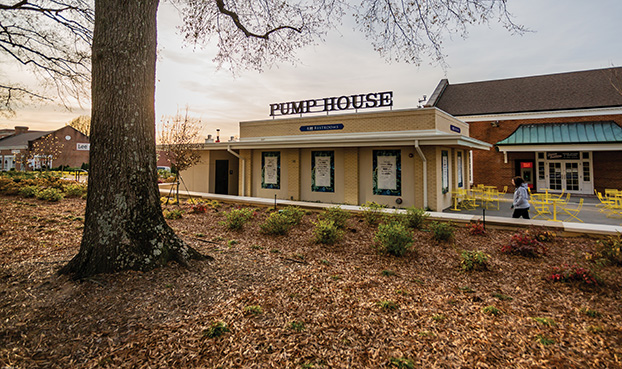 The Pump House in downtown Kannapolis has been announced as one of 10 finalists for the best bathroom in America. Photo submitted.

KANNAPOLIS — Not satisfied with only having the best ballpark in the country, the city of Kannapolis is vying for another national title — top toilet.

The Pump House on West Avenue last week was announced as one of 10 finalists for America’s Best Restroom 2021. The annual competition is held by Cintas, a Cincinnati-based company that provides products to privies across the country.

“We’ve got a diverse list of facilities from across the country vying for the title of America’s Best Restroom,” Sean Mulcahey, marketing manager for Cintas said in a statement. “The public is expecting a higher hygiene standard in public restrooms, and we’re proud to spotlight these unique restrooms that are well-maintained without sacrificing aesthetic quality.”

Among those contending for the throne are Fancy Flush in Santa Rosa, California; the bathroom at Terminal Four at New York’s JFK airport; and Planet World in Washington, D.C. Greenville, South Carolina has an entry on the list and both a Thai restaurant in Atlanta and a pizza joint in Cincinnati are looking to rise to the top as well.

“I think we can take them,” she said.

Now that the top 10 has been decided, lavatory lovers can vote for their favorite bathroom from now through Aug. 20 at www.bestrestroom.com. 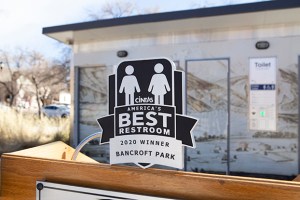 The plaque awarded to Bancroft Park, the top bathroom in the 2020 competition. Photo submitted.

In addition to a plaque awarded to the winner, $2,500 worth of Cintas products and services are on the line. The extra bath supplies would be put to good use at the Pump House. There’s no way for the city to know exactly how often the facilities are used, but Keller estimated the bathrooms are used by hundreds of people every week who are visiting downtown to exercise, eat a meal, shop, or enjoy a craft beer.

Keller nominated The Pump House for the honor.

“I was reading a magazine a couple of years ago and I saw an article with a list of that year’s winners,” Keller said. “I thought, we are building such a great streetscape with an awesome public restroom facility. I want to nominate us when we finish.”

The Pump House, included in phase one of the city’s down revitalization plan, was completed in the fall of 2019. Giving people a place to go downtown, Keller said, was important to the city’s economic development efforts.

“The big picture is that it is so much more than a restroom facility,” Keller said. “The streetscape is and was meant to be a public park and it needs to have public restrooms. We have so many people coming to downtown as a destination and this is one more way for people to say, ‘Kannapolis has it going on. There’s some good things happening there.’ ”

The Pump House itself is designed to blend in with the rest of the downtown Kannapolis streetscape. Inspiration quotes are painted on its outer walls and it’s surrounded by chairs, trees, flowers, art installations and a putting green. Old Armor Beer Company and VIDA apartments are just across the street and Atrium Health Ballpark is not far away.

“It’s really a gathering spot,” Keller said. “And oh, by the way you can use the restroom too.”

The Pump House contains more than just one type of plumbing, since it also is home to the pipes and valves needed to pump water through a popular fountain nearby.

The facilities are managed by the city’s parks and recreation department, and Keller said members are honored for The Pump House to be listed among America’s best bathrooms. They clean the facility daily.

“They’ve had fun with it and I think they’re very proud of it,” Keller said.

More information about the award and a list of previous winners can be found at www.bestrestroom.com.