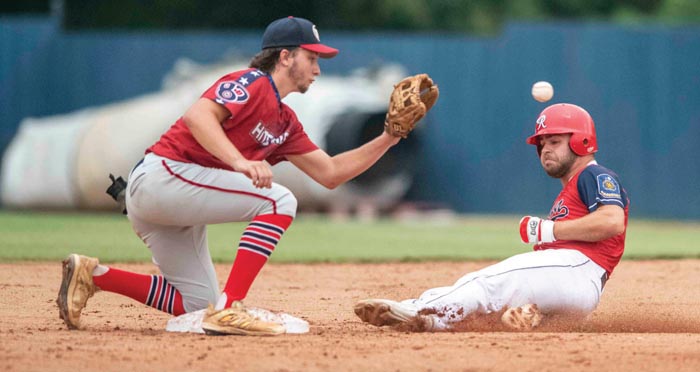 Rowan’s Charlie Klingler slides into second base as Hi-Tom’s Carter Bass receives the throw during the opening round of the Area III semifinals at Staton Field on July 20. JON C LAKEY / FOR THE SALISBURY POST. 7/20/21, GRANITE QUARRY,NC.

There was a time when all of Rowan’s high school stars, the Mulkeys, the Simpsons, and the Poteats, came together to play Legion ball at Newman Park. There was a mystique about the program and the team and the fans and the hot dogs and the park, but even the diehards understand that day has faded into the sunset. Newman Park itself is undergoing a massive transformation to artificial turf, while Rowan Legion baseball soldiers on with whatever talent is made available.

Still, Gantt and his coaching staff always mold unheralded players into a team greater than its individual parts. This summer, Rowan County played as a temporary tenant at East Rowan’s Staton Field, but still went 14-4.

A month ago, the Rowan County roster would have gotten votes as the shallowest in program history, but now Rowan is Area III champion (the 20th title for Salisbury/Rowan) and is headed to compete in the state tournament at Cherryville’s Fraley Field. Rowan plays Port City Post 545, a newcomer to the state tournament, to kick off pool play at 10 a.m. on Wednesday.

To say the least, it’s been a satisfying summer for Gantt. He still loves to coach, and he had coachable players. He got to watch them get better over the course of a slim, late-starting, 18-game season. That’s been rewarding.

“We don’t have as much talent this year as we had for NC3 baseball last summer,” Gantt said. “But baseball is still baseball, and if you go about things the right way, you can improve at it. We’ve got some hard-working kids that people might have been sold a little bit short based on their high school seasons. One thing I will say about these guys is that every one of them has been all about the team. That’s huge. They’ve played for each other in some tough situations, and they don’t give up. That gives you a chance.”

It’s been ugly, at times. Saturday’s Area III championship game with Kannapolis included 21 walks and endless mound visits and it took more than three hours to play seven innings. That’s not exactly vintage Rowan Legion baseball, but the bottom line was a crazy 15-14 victory that brought smiles to a lot of faces.

But the bottom line is Rowan County summer baseball is still entertaining.

Much of the entertainment has been provided by the ungodly slugging of Logan Rogers. Rogers, a first baseman/outfielder and occasional pitcher is batting .532 (33-for-62) with seven homers and 41 RBIs. It’s a shame he wasn’t able to play one of those 45-game Legion seasons, but it still will be a season remembered as one of the best of all-time. When Rowan County has needed someone to smash a three-run homer, Rogers has done it.

“Where he’s really improved is he’s learned to pull the ball without hooking it foul,” Gantt said. “As outstanding as Rogers has been, I don’t think he’s ever gone up to the plate over-swinging. He goes up there trying to do exactly what the situation calls for. He’s stayed consistent with his approach. He’s taken his walks. It’s been a good example of what happens when you try to do the right thing every time for the team. That’s when someone ends up having a great year individually.”

Charlie Klingler, like Rogers a seasoned college guy, has been nearly as amazing. A second baseman/catcher, he’s been the ideal leadoff man, on base three times a night with hits or walks. No. 2 hitter CP Pyle has a high on-base percentage and makes good things happen with his speed. Dylan Driver has been big as the cleanup hitter behind Rogers. Driver is so tough that teams usually pick their poison and pitch to Rogers.

“Dylan isn’t that typical cleanup hitter,” Gantt said. “He’s not going to hit a lot of homers, but he can drive the ball to the gaps and he’s tremendously fast.”

Aiden Schenck has been a capable No. 5 hitter.

The bottom of the lineup guys have held their own, especially catcher Tristan Miller. He didn’t get to swing for a loaded East Rowan lineup, but sometimes he’s the No. 6 hitter for Rowan County. He’s had several game-deciding hits.

Shortstop Austin Fulk, who played second base for East Rowan, has anchored the infield defense.

The pitching is as thin as the air at Colorado’s Coors Field, and even the most optimistic Rowan fan knows it’s going to be a challenge to survive three consecutive days of pool play.

But Driver (3-0) has been getting better and better and is certain to pitch Wednesday’s opener.

Mattox Henderson, who threw a no-hitter against Concord, is the likely starter for Rowan’s second pool game on Thursday night. That one will be played against host Cherryville in front of a boisterous home crowd. Henderson barely pitched for East Rowan, but Gantt has seen him coming on ever since last summer’s NC3 action.

Who pitches Game 3 against Wayne County on Friday afternoon is still undecided, but Chase Drinkard (5-1) will figure in to the mix somewhere, either in relief in one of the first two games or possibly as the starter in Game 3. Drinkard has been a monumental surprise. He was never a big factor at Carson, but after a year at Southeastern Community College — he was a teammate of Rogers — he’s turned in a terrific Legion summer.

“He’s lost 40 or 50 pounds since he was in high school,” Gantt said.  “He’s the only one on this team who’s a pitcher only and doesn’t play a position, so we’re running him to death in practice drills. He just keeps getting in better shape.”

Rogers, Schenck, Kaleb Burleyson, Zander Burton and some others probably will be called on to pitch, especially if Rowan can finish as one of the top two teams in its pool and is still alive for Saturday’s semifinals.

The odds still look pretty long, but not nearly as long as they looked when the season began.

Top 2 from the 2 pools advance

Championship game at time to be determined