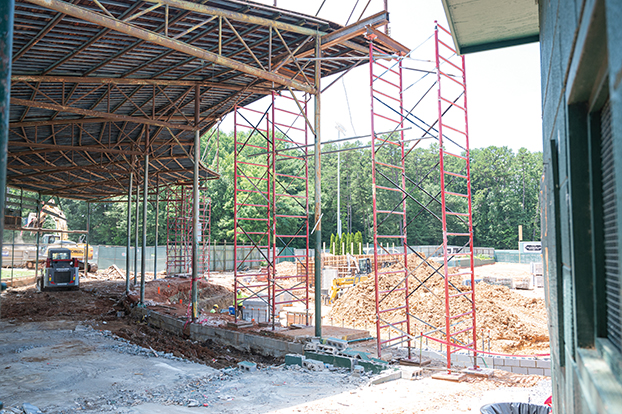 Josh Bergeron / Salisbury Post - Construction crews work near the grandstands at Newman Park on Tuesday. Catawba College now says the grandstands will have to be totally replaced.

SALISBURY — Newman Park’s renovation plans are leaning more toward a complete replacement because of structural issues found in grandstand and roof, which were erected in 1934.

Catawba College on Tuesday said a structural engineer discovered problems at the baseball stadium that will require complete replacement of the grandstand’s metal supports and the roof. While the grandstand’s wooden bleachers were part of original renovation plans, the structures that support the grandstand and the roof were not, said Communications Director Jodi Bailey.

“We understand this news will be disappointing to many people who have special memories of Newman Park,” Nelson said. “However, Catawba’s contractors determined this is the prudent course of action to ensure the best environment for spectators and players.”

Bailey said the college and its architects haven’t determined the design of the new grandstand structure.

Originally built in 1926, Newman Park has hosted professional, college, American Legion and high school baseball games. It’s the home of Catawba College’s baseball team, which has a 834-405 record at home. Normally, it would host American Legion games in the summer, but home contests this year moved to East Rowan High School.

Jim Gantt, coach of the Catawba College baseball team and Rowan American Legion team, said the ballpark is the third-oldest in North Carolina. While it would have been ideal to keep the original grandstand, that’s no longer an option.

“Our goal is to build a stronger baseball community and we will do that,” he said.

The ballpark’s ongoing renovation started in June with a first phase that includes turf installation and dugout replacement. The park’s infield and outfield have merged into a single, dirt surface. Mounds of dirt and construction equipment dot the field. The wooden seats in the grandstand had already been demolished when Catawba College made Tuesday’s announcement.

A new grandstand will be included in renovations after funding is found, but temporary stands will be used in the interim and Catawba may use them for the next baseball season.

Catawba College has raised more than $3.3 million for the project, a news release said. The total required for the ballpark is $12 million.

To give to the fundraising drive for Catawba College’s Newman Park renovations, visit Catawba.edu/givenow or call the school’s development office at 704-637-4394.