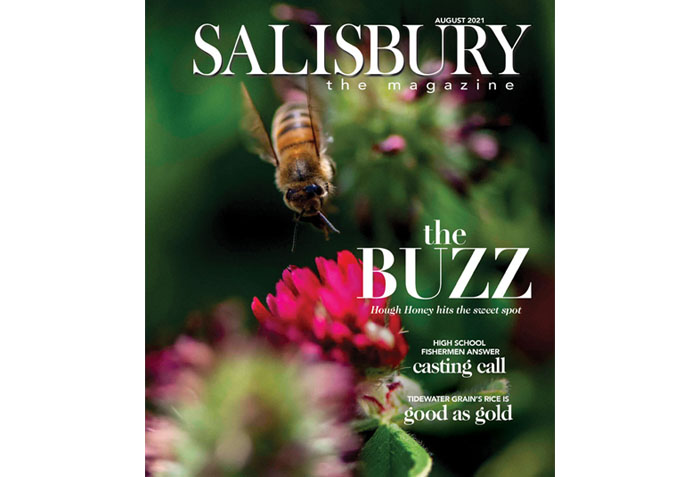 SALISBURY — The August issue of Salisbury the Magazine, a publication of the Salisbury Post, has reached subscribers and is now available at its normal distribution spots elsewhere in Rowan County.

The cover features a honeybee hovering over red clover, and inside contributing writer Susan Shinn Turner spends time with beekeeper Nathan Hough and the industrious bees that make his family’s honey. Turner also touches base with Marcel Renn, president of the Rowan County Beekeepers Association.

Staff writer Ben Stansell traveled to Pamlico County and brought back his story and photos of Tidewater Grain Co., which has a strong Kannapolis connection in its distribution and marketing of the heirloom rice two buddies are growing in North Carolina’s coastal marshland.

It all started with duck hunting.

Chris Corriher, Bob Bauer and a community of other volunteers are the men behind the establishment RoCo Bass Anglers, a club providing competitive fishing opportunities for junior to high school youth in Rowan County and beyond.

As part of the story, Salisbury the Magazine spent a day at this year’s state bass tournament for youth, held at High Rock Lake.

Kathleen A. Bergeron, a writer and historian, tells the story of Ashbel Smith, an educator and doctor in Salisbury during the early 19th century who packed off to Texas in its early days as a republic, and later as a state, to become the “Ben Franklin of Texas.”

Elsewhere, Pete Prunkl and Historic Salisbury Foundation offer a look at the 1892 landmark Beulah S. Moore House on South Ellis Street, which has been beautifully revitalized inside and out by current owners Bob Lambrect and Jon Planovsky.

In this issue, the work of photographers Jon Lakey, Sean Meyers and Andy Mooney is featured. Christopher Derrick provides the Through the Lens photo; Connie Eads, the artwork for Salisbury’s the Place.

In addition, look for an August events calendar and Scene photos from Rowan Museum’s May Day celebration at the Utzman-Chambers House and an open house at the Cleveland Community Fire Department.

Salisbury the Magazine publishes nine times a year. Writers and photographers are putting the finishing touches on the September issue, which should reach subscribers in mid August and be distributed elsewhere in Rowan County toward the end of that month.