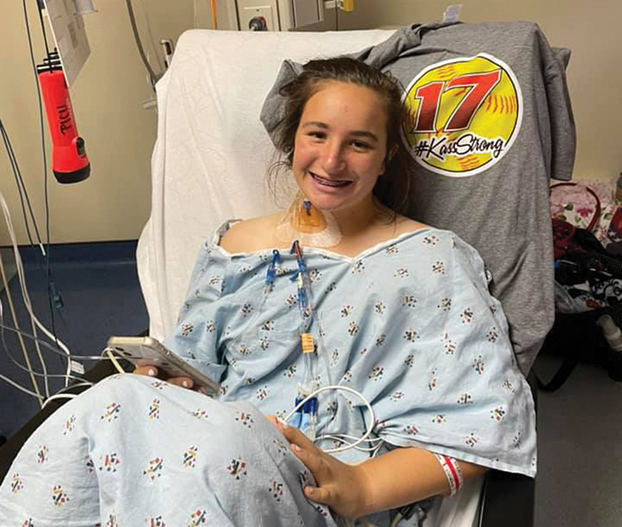 Courtesy photo - Kassidy Sechler poses for a photo with a shirt that features her softball number and the hashtag #KassStrong while in the hospital.

CHINA GROVE — More than a week after she was rushed in an ambulance to a hospital in Hickory, Kassidy Sechler will return home to China Grove today.

During a travel softball game on July 17, the 15-year-old girl experienced a sudden medical emergency in her team’s dugout and was taken to Frye Regional Medical Center, where she was stabilized and flown to Brenner’s Children’s Hospital in Winston-Salem.

For days, Kassidy remained on a ventilator, connected to a number of tubes that provided life-sustaining support while her organs started to function properly. While Kassidy continued to improve, friends and even total strangers kept close watch her progress through the Prayers for Kassidy Facebook group, which has grown to almost 12,000 members.

In addition to the support shown on social media, many softball players, coaches and fans gathered in various parts of the state last week to hold prayer vigils.

One day late last week, still connected to a breathing tube and therefore unable to speak, Kassidy found a way to communicate with her family by writing on a notebook.

“She was able to write the word ‘What’ in our notebook,” Kathy said. “She wanted to know what happened.”

The answer to her question came on Sunday, when Kassidy was diagnosed with arrhythmogenic right ventricular cardiomyopathy, or ARVC. It’s is a genetic disease that affects the heart, mainly the right ventricle. It can cause abnormal heart rhythms and make it difficult for the heart to pump enough blood.

As a result of the diagnosis, Kathy said Kassidy will likely be limited to minimal physical activity for the rest of her life. For a softball player who also loves to compete in soccer, basketball and other sports, the reality of the news was difficult to digest.

“It was just beyond devastating,” Kathy said. “Her whole life is going to be changed.”

But it didn’t take long for Kassidy to look for a silver lining.

“She was pretty quiet for a while,” Kathy said. “I guess just trying to soak it all in. Then she’s been OK. She realizes everything is going to change. Then she was like ‘Well, I could be team manager,’ just trying to pull the positive out of all of it.”

On Monday morning, Kassidy underwent surgery at Atrium Health Levine Children’s Hospital in Charlotte. During the procedure, doctors placed a defibrillator in her chest, which will help normalize any abnormal heart rhythms she may have. As a result of the successful surgery, Kathy said Kassidy will be discharged on Tuesday after one final electrocardiogram is completed.

After 10 days in three different hospitals, Kassidy and her family will return to their China Grove home. Kassidy, her mom said, is looking forward to sleeping in her own bed.

Throughout Kassidy’s medical ordeal, thousands of people have supported for her on social media. The softball community near and far has rallied around her by making stickers, wristband and shirts bearing her name or coining the hashtag #kassstrong. A GoFund me page has raised over $13,000 for her family, and there’s been an almost constant stream of posts with people sharing good will messages or prayers.

“It’s hard to take in,” Kathy said. “It’s overwhelming. As soon as she was able to really wake up and see things, we were showing her these posts.”

When Kassidy was moved from Brenner’s Children’s Hospital to Atrium Health Levine Children’s Hospital on Saturday night, supporters gathered on a bridge overlooking I-85 to wave as they passed underneath. People put pink bulbs in their front porch lights for her, too.

“We just needed that support,” Kathy said. “We needed that outpour of love to get us through all of this.”

The way people have come together to support Kassidy, her mother said, has shown that “there’s a lot of good people in this world, a lot of Godly people that just want to share in our journey.”

The journey will continue for Kassidy and her family as they work with doctors to learn more about her medical condition.

Kassidy will have a virtual visit in a week and return to the Sanger Heart & Vascular Institute in six weeks. At that point, doctors will have Kassidy run on a treadmill to determine what kind of physical activity her heart can sustain. From there, Kathy said the future is still unknown.