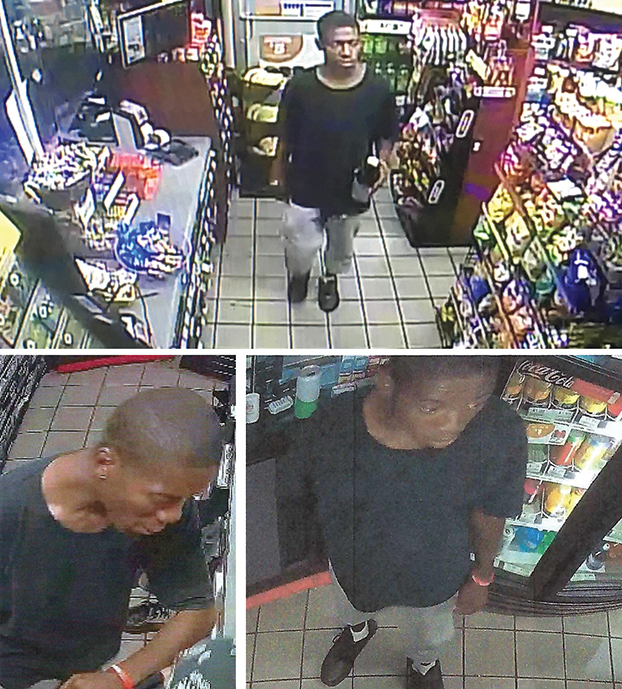 Photos submitted - These images show a man whose wanted in the robbery of a Circle K convenience store on Innes Street in Salisbury. Police are asking for the public's help.

SALISBURY — Police are renewing a call for the public’s help in a robbery that occurred July 6th.

An unidentified man in the incident demanded money from a Circle K convenience store at 1015 East Innes St. and left with a sum of money. He also selected a beer from the store’s cooler. The man didn’t display a weapon, but he pointed to what could have been a firearm, said Lt. Justin Crews of the Salisbury Police Department.

Police on Monday released more photos from the incident that showed the man walking through the store with a drink in hand and standing at the front counter.

Anyone with information about the incident can contact Crews at 704-216-7545 or submit a tip online by visiting tips.salisburyrowancrimestoppers.org.

• City Electric on Friday it was a victim of vandalism in the 2300 block of South Main Street.

• A woman on Friday reported items with a value of $415 were stolen from a vehicle in the 100 block of Ridge Avenue.

• A woman on Sunday reported vandalism in the 100 block of Depot Street.

• A hit-and-run was reported Sunday near the intersection of Old Concord Road and Gold Hill Drive.

• A man overdosed Friday in the 1800 block of Sides Road in Rockwell.

• A man on Friday reported a previous theft of a dump trailer in the 100 block of Owens Drive in Salisbury.

• Dicks Sporting Goods on Friday reported a larceny in the 100 block of Tingle Drive in Salisbury.

• A woman on Saturday reported a burglary in the 800 block of Julian Road in Salisbury.

• A man on Saturday reported property damage in the 300 block of Mount Hope Church Road in Salisbury.

• An overdose was reported Saturday in the 4700 block of Rainbow Drive in Kannapolis.

• A woman on Sunday reported a larceny resulted in an estimated loss of $500 in the 300 block of Varnadore Road.