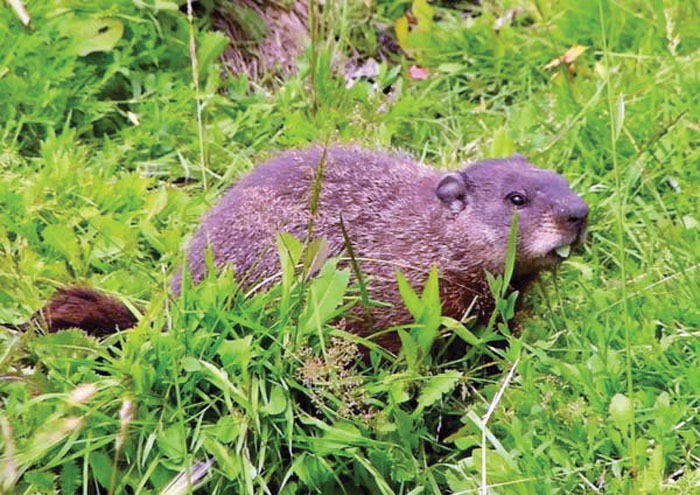 We have a groundhog living at the Extension Office gardens. He’s been living there for a while. He’s quite happy and fat. Boy, is he fat! I say he, but he could be a she, I don’t know.

Groundhogs can be the bane of many a gardener. While our administrative assistant thinks he’s cute, our Master Gardener volunteers think he is the devil. Groundhogs, or woodchucks, are the largest members of the squirrel family.  They live primarily solitary lives except for in the spring when they mate and raise their young for about three months.  They are excellent climbers and swimmers but prefer to live on the ground and in burrows underground. They build extensive burrows anywhere from eight to 66 feet long — with multiple entrances and rooms, including bathrooms. Some groundhogs even have more than one burrow.

Groundhogs can be found all across North America, from Alabama to Alaska. The lifestyle of a groundhog is feast or famine. They gorge themselves all spring and summer, so they live off their fat reserves as they hibernate in the winter from November to February. The groundhog is a vegetarian and will eat bark, roots, stems, flowers, and vegetables from your garden. They especially like the tender new growth of garden plants. Groundhogs like to choose a place to burrow with an overhead cover. The one at our office has built his burrow under one of our garden sheds. The North Carolina Wildlife Resource Commission says that though the burrow systems are complex and can be very long, they typically don’t cause damage to building foundations. Sometimes you can deter a groundhog from burrowing by putting a brick or large rock in the burrow entrance until the animal decides to go somewhere else. However, if the groundhog already has an established burrow, moving somewhere else can be very difficult. Their burrows usually have multiple entrances, and they can always make a new entrance if needed. Groundhogs are not easily deterred, and in a war over wits, you will be surprised how smart and determined the groundhog is. If one burrow entrance becomes unusable, the groundhog will dig it back out or build another one. Sometimes wire mesh barrier will keep it from using a tunnel, but it may just dig around it.

You can build fencing to exclude groundhogs from small areas like backyard gardens and under buildings. Install a 3-4 foot high fence of hardware cloth or chicken wire with a 1-foot underground footer and at least 1 foot of the top the will wobble when the groundhog tries to climb it. A single strand of electric wire 4 inches of the ground on the outside of a non-electric fence can also provide some help.

In North Carolina, there is not a regular hunting season on groundhogs so that they may be hunted at any time, and there is no bag limit. However, if you live within city limits, it is unlawful to use a firearm. If you decide to trap your problem groundhog outside of trapping season (Nov. 1-Feb. 28), you may need to get a depredation permit for free from the N.C. Wildlife Resource Commission. Once trapped, your groundhog cannot be relocated. It must be euthanized or released at the site of capture. We have built fences around our precious garden plants, and we have tried to get our fat, furry friend to move. Guess who’s winning? For more information about groundhogs or other horticultural topics, contact the Rowan County Extension Center at 704-216-8970.

Amy-Lynn Albertson is director of the Rowan County Extension.

Ann Farabee column: Lay down with me