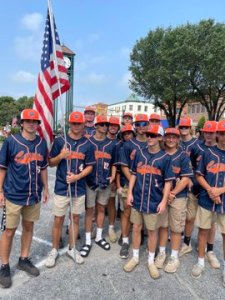 The victory elevated Carson to 2-0 in pool play.

Carson concludes pool play  Saturday when it takes on Davidson County at 3:45 p.m. at Holt-Moffitt Field.

Carson (22-2) will finish first in its pool if it beats Davidson County.

It was a 1-1 game when Carson came to bat in the bottom of the third. Five straight Carson players singled to ignite that eight-run inning. Jordan King and Connor Rayfield had two-run singlesd during the inning.

Rayfield added a two-run double in the fourth as Carson pushed the lead to 11-1. Three Carson relievers were able to finish up.

Rayfield drove in four runs, while King knocked in three.