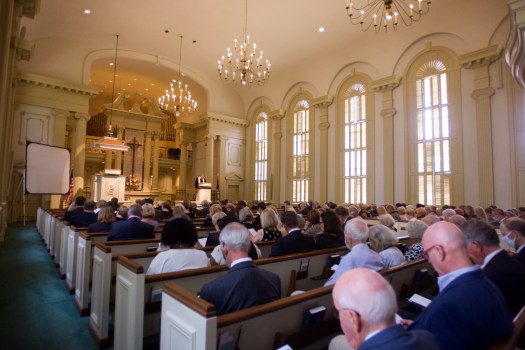 Carl Blankenship/Salisbury Post - The crowd at the memorial service after Carolyn's burial. 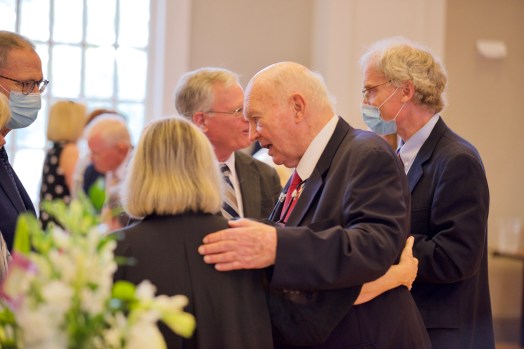 Carl Blankenship/Salisbury Post - Gordon Hurley during a visitation after the service. 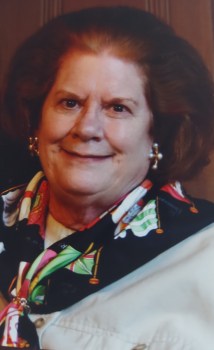 SALISBURY — Gordon Hurley remembers his wife, Carolyn, as a good person who was involved in the community and also liked to maintain her privacy.

Carolyn died Monday at age 79 after a stay at Rowan Medical Center. She was an educator, mother and a community-minded person.

Gordon and Carolyn were lifelong members of Salisbury’s First Presbyterian Church. A memorial service was held Friday to celebrate her life at the church after her burial. Parking around the church filled up for the service.

Minister Randy Kirby spoke to the congregation about pastoring for Carolyn and her presence at the church. He told them she liked shopping and local shopkeepers loved her for it, but she was just as interested in being generous. Kirby said Carolyn often asked about the church’s care list so she could reach out and help.

“Giving was in her nature,” Kirby said.

Her friends remembered her as thoughtful and empathetic.

Friend Janis Smith said Carolyn sent her a card with a personal note every day of a two-week stay when her husband’s mother was in the intensive care unit at Wake Forest Baptist.

Jane Riley, another friend, said Carolyn had a natural wit. One fond memory with Carolyn was a joint vacation between their families to Wrightsville Beach when their children were young. It seemed like a race to get there because everyone was so excited.

Carolyn shunned the limelight. In 2002, she was awarded the Historic Salisbury Foundation’s Clement Cup for her service, but she did not show up for the luncheon when it was presented. Gordon attended in her stead and told the crowd the award meant a lot to her, but Carolyn is “a pretty shy person.”

Then foundation President Nancy Clement told the Post at the time Carolyn would often work in the background and do things other people connected to the association did not want to.

Carolyn and Gordon were married on Oct. 24, 1965, at First Presbyterian Church. A story in the Post the following day described the ceremony down to Carolyn’s dress and the imported lace, silver candelabra and yellow, white and bronze chrysanthemums adorning the bride’s table at the reception. She was a teacher at Overton Elementary School at the time. She also taught at Knox Middle School.

In the ’70s, she served as chairman for a membership drive for the North Carolina Museum of History Associates, chaired the Historic Salisbury Foundation Flea Market and started the Canterbury Book Club with her friends.

The Hurleys are notable people in Salisbury. Patriarch J.F. Hurley’s name adorns the YMCA branch in Salisbury, and the family’s history is intertwined with the Post. The family owned the paper for most of its history, purchasing it in 1912, five years after its founding and selling it to Evening Post Industries in 1997. The Post changed hands again when it was purchased by Boone Newspapers in 2014.

The Hurleys were active managers at the Post. Gordon was named president in 1986 and Elizabeth Cook, who would go on to become editor of the Post, was named associate editor at the same time.

Carolyn is survived by Gordon, her son James and her sister Margaret Schenck. She was preceded in death by her brother Philip Cates and son Buck.