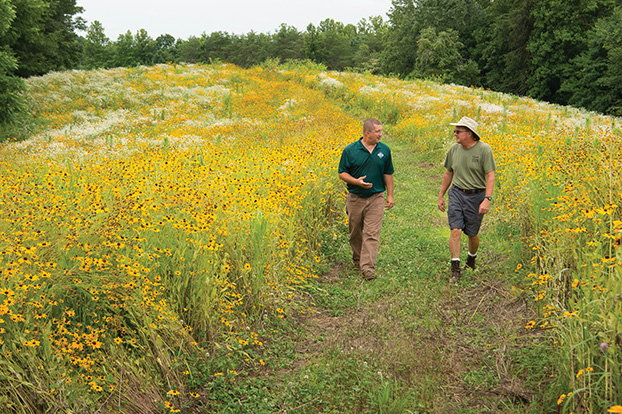 SALISBURY — During a staff meeting last month, John Isenhour got a message that he needed to call Tim Gestwicki, the leader of the North Carolina Wildlife Federation.

Isenhour, a private wildlife biologist for the North Carolina Wildlife Resources Commission, immediately dialed up Tim Gestwicki. On the other end of the line, Gestwicki started the conversation by asking Isenhour a question.

“He wanted to know if I had a suit,” Isenhour said.

After questioning Isenhour about what’s in his closet, Gestwicki revealed that Isenhour had been chosen as the organization’s land conservationist of the year. The award, one of several Governor’s Conservation Achievement Awards bestowed annually, will be presented to Isenhour at a banquet in Cary on Sept. 11.

“Weddings and funerals would be about the only time I’d wear a suit,” Isenhour said. “But I’ll try to scrape together a sports coat.”

There’s not much need for suits in Isenhour’s line of work. The mustached 49-year old typically finds himself walking through tall brush or thickets, examining land and talking to the people who own it about how they can manage it better.

As a private lands biologist based in Salisbury, Isenhour is responsible for helping landowners in a nine-county region spanning from Mecklenburg to Moore and up to Rowan and Davidson.

Conserving private property, Isenhour said, is critical to both the mission of the NCWRC and to the greater good. Although most people tend to think of state and national parks as bastions for conservation, those public lands only make up a small portion of the state’s total mass. Isenhour said that anywhere between 65-80% of North Carolina’s land is actually privately owned.

“Conservation agencies can work on state and federal-owned land and still have a very small impact on the landscape,” Isenhour said. “But there’s a lot of things private landowners can do even on a few acres to enhance habitat for a lot of species that are in decline, especially pollinator species.”

When a private landowner in the southern Piedmont wants to conserve their property, whether it be 20 acres or 2,000 acres, they come to Isenhour to talk about the best ways to achieve that goal.

Oftentimes, landowners are interested in conserving their property while also maintaining some level of production. Finding the line between those two sometimes contrasting ideals is a large part of Isenhour’s job.

“There’s some back and forth to figure out what the landowner is comfortable with doing and how that matches up with NCWRC’s goals and objectives,” Isenhour said. “A lot of folks get tired of hearing me talk about balance, but that’s what it is. It’s about finding the balancing point where the landowner is willing to forgo some financial gain to gain some wildlife.” 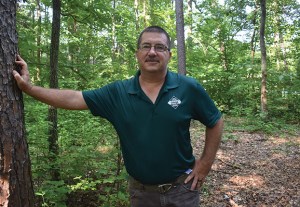 John Isenhour won the award for land conservationist of the year for his work helping landowners manage their property to conserve habitat for native plants and wildlife. Ben Stansell/Salisbury Post

Isenhour said his best tool for relating to private landowners is through his own experiences with the natural environment. As a child, Isenhour grew up jumping over creeks and running through the fields on his family’s 60-acre property near Gold Hill.

“I was just exploring and seeing what was out in creation,” said Isenhour, who holds a degree in wildlife management from N.C. State University. “That’s really where the interest comes from and I’ve had the opportunity to continue to build that interest and have been lucky enough to have a career where I’ve been able to share that interest with private landowners.”

Before joining the NCWRC, Isenhour spent about two years as a naturalist at Dan Nicholas Park and had a stint with the N.C. Forest Service in Clayton, near Raleigh. He made his way back to Rowan County and has been stationed in Salisbury for the past 16 years.

Every piece of land and every landowner Isenhour works with is distinctly different. There’s some who own just a few acres and only want to bring back a native species of grass. Others have enormous swaths of land and might want to improve habitat for songbirds.

No matter why a landowner wants to conserve their land, or what they want to preserve it for, Isenhour takes a similar approach to helping them.

“Understanding the challenges is probably as important or more important than understanding the possibilities,” Isenhour said. “If you put forth a plan that’s pie-in-the-sky, very complicated, making a lot of promises that may or may not be feasible, you’re going to have land owners who get discouraged quickly.”

Isenhour works with landowners for as long as they’re interested in conserving their property. He’s collaborated with a handful of landowners for well over a decade.

“It’s like any good relationship,” Isenhour said. “You build it to a certain level and you sustain it. Really good, interested, willing landowners are kind of like family. You know they’re there, you have this in common, you might see them at a reunion every year or you might see them every couple of months. I’m still working with landowners who are doing major things that I started working with 15 or 16 years ago.”

What made receiving the award for land conservationist of the year special, Isenhour said, was the fact that he was nominated by a landowner he’s worked with for the past few years. Other landowners he’s helped have also contributed letters of recommendation in support.

“The fact that the landowners find the service that we provide valuable enough to recommend or write a record of referral for this award is pretty meaningful,” Isenhour said.

When Isenhour takes the stage to deliver his acceptance speech, he said he’ll use his moment in the spotlight to highlight those landowners.

“As far as this award goes, it’s interesting they would give it to a private land biologist because I really would accomplish nothing without willing landowners,” Isenhour said.

A few of the people who nominated him will be at the banquet. Isenhour said he plans on dressing up for the occasion — even if it is just a sport coat.

Editor’s Note: This story has been updated since it was originally published to reflect the correct names of the organizations mentioned.