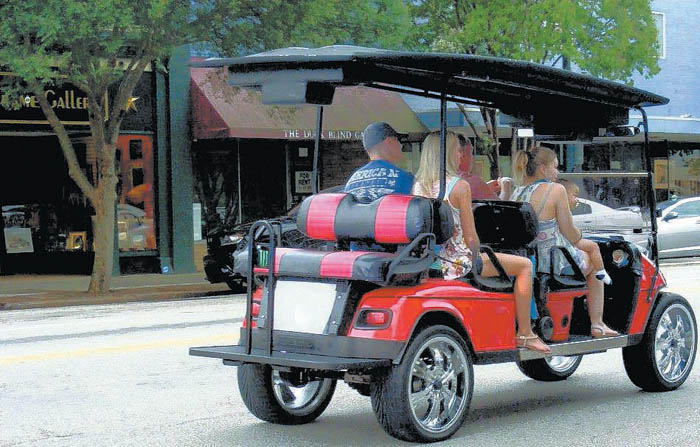 Allowing golf carts on city streets has been put up for discussion, but City Council tabled the issue. (Salisbury Post File Photo)

SALISBURY — City Council members on Tuesday tabled the issue of creating an ordinance regulating the operation of golf carts on public roads until more information about risks and enforcement can be obtained.

Members also indicated they’d prefer to “test” the ordinance with a petition process for authorized streets.

The issue is something the city’s engineering department has looked into before. During a city council meeting in April 2018, the council at that time tabled the issue to gather more information from a special committee that was formed and led by council members David Post and Brian Miller. At that time, some public comment sessions were held, but the ordinance did not move forward.

City Engineer Wendy Brindle said the current request comes from golf course communities for those particular neighborhoods traveling to and from the golf courses. Golf communities within the city’s limits include Rolling Hills, The Crescent, the Country Club and Corbin Hills.

North Carolina law allows municipalities to pass ordinances regulating the operation of golf carts on any public street or road where the speed limit doesn’t exceed 35 miles per hour. The statute further states municipalities have discretion in its regulations, which may include requirements for registration and associated fees, equipment, load limits and operable hours. Operators cannot be younger than 16 years old.

A sample ordinance from the North Carolina Department of Transportation states golf carts may cross roads with streets that have posted speed limits greater than 35 miles per hour, but they may not ride along that road or cross at an angle. That ordinance also requires drivers to be licensed and no younger than 16, along with liability vehicle insurance coverage required by state law. It prohibits open containers of alcohol. It also requires basic equipment including rear-view mirrors, headlights and rear triangle reflectors.

Brindle said the city has the discretion to modify the ordinance with its own requirements and stipulations. In China Grove, registration is required, while in Granite Quarry, it is not. Additionally, the city can apply the ordinance to specific neighborhoods and/or require a petition process for the approved streets. Fines could also be implemented for violating the ordinance.

Mayor Karen Alexander was in favor of a petition process so that council members can evaluate authorized areas for any safety concerns.

“I’ve seen kids that were a lot less than 16 years old driving these things,” Alexander said. “And that’s what scares me to death. And some of them I’ve seen at dusk with no lights on.”

Brindle said the city has a draft ordinance with language limiting it to specific communities that have requested it, which she can provide as the city obtains more details about the risks and feasibility. Council members agreed to table the issue until then.

“The idea is we could evaluate it on a petition basis and therefore limit where it could be feasible to do safely,” Alexander said. “But because citizens have requested it, we need to investigate it.”

Mayor Pro Tem Al Heggins asked if the city had any data about infusing golf carts into regular traffic. Brindle didn’t have any to share Tuesday, but said she could look into it.

“I live near Catawba College,” he said. “The idea that I could ride to the Country Club on Mahaley and Confederate (avenues) is scary to me and I don’t think we should do that.” Both of those roads have speed limits of 35 miles per hour.

Post recalled past sessions he’s held with elementary students showing how city council operates, which included allowing them to make a decision on the type of issues the council would vote on. When he would ask for their thoughts on allowing golf carts on public streets, most would say no because of the safety hazards, he said.

Council member Tamara Sheffield questioned how such an ordinance could be enforced and how authorized roads would be denoted or communicated to drivers.

“If we limit it to a community, I think it then could be feasible,” Sheffield said. “But it does scare me a little. Who would drive up Mahaley or Brenner (avenues) in a golf cart? It’s very scary as it is. If it can be maintained to a community, who am I to prevent that from happening. But I would need to know the more specifics of how it’s enforced and how do we regulate it and make it as safe as we can.”

Brindle said Salisbury Police Chief Jerry Stokes said during the 2018 public input sessions that allowing golf carts would be an additional burden on the department for both registration and enforcement.

Heggins added that Salisbury is different due to its size compared to surrounding municipalities. Council members asked Brindle to look into what cities of comparable size have done.