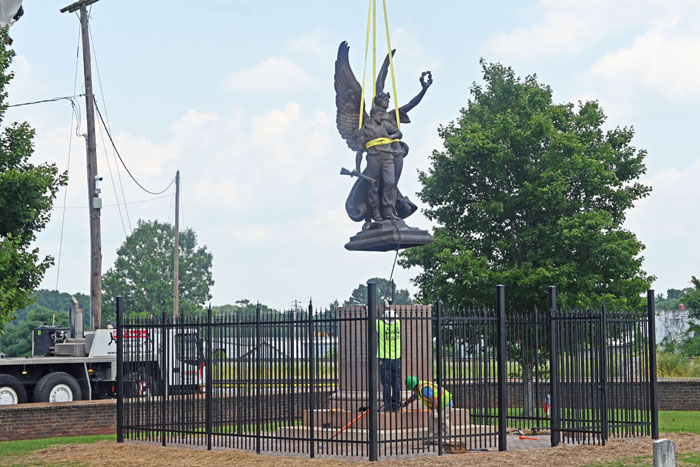 Natalie Anderson/Salisbury Post — Construction crews place the "Fame" Confederate monument on its base at its new home overlooking Confederate burial sites at a historic cemetery on North Lee Street on Friday, July 23, 2021. The base, which was transported and placed separately, weighs 14,000 pounds, while the entire structure weighs more than 42,000 pounds.

SALISBURY — A year after its removal, the “Fame” Confederate monument was placed in its new home Friday — a historic cemetery overlooking Confederate burial sites on North Lee Street.

Until July 8, 2020, “Fame” was at the intersection of West Innes and Church streets for more than 100 years. Discussion of Fame’s removal began last summer amid protests of racial justice following the death of George Floyd, a Black man killed by police in Minneapolis. Though not the first time a move was discussed, city leaders and Salisbury Police formally declared the monument a public safety concern at a June 2020 City Council meeting after gunshots were fired into the air at the site of the statue during a “Black Lives Matter” protest on May 31.

Less than two weeks later, the city announced a tentative deal with the Robert F. Hoke chapter of the United Daughters of the Confederacy, which owns the statue, to relocate it to a cemetery on North Lee Street that has tombstones of Confederate soldiers. A few days after the city declared the statue a public safety issue, the UDC formally signed the agreement to begin the process of relocation.

Beginning at 9 a.m. on Friday, crews started work to erect the monument. Pieces of the foundation and base were placed before the statue’s arrival around 2 p.m. The city’s Public Works Department estimates the total weight is more than 42,000 pounds. The base, which includes an inscription and is made of pink granite from the Balfour mine in Granite Quarry, weighs 14,000 pounds, while the statue itself weighs 3,000 pounds.

The specific site outlined in the agreement is within the eastern portion of the cemetery, which is bound by existing grave markers, the brick and stone along East Franklin Street and the North Carolina Railroad.

Mayor Karen Alexander on Friday commended the UDC for its collaboration with the city to carefully deliberate and research an appropriate location for the monument.

“The final chosen site of the Old Lutheran Cemetery on Lee Street, filled with graves of both known and unknown Confederate soldiers, was chosen with the full support of the national, state and local UDC, for both the location and the agreement,” Alexander said. “After a year of planning, site research and the preparation, ‘Fame’ is now in her final location, placed in historical context, overlooking the graves of the soldiers for which she was originally created in perpetuity.”

The formal agreement with the UDC made the city responsible for the cost to remove, store and relocate the statue, ultimately granting the UDC full ownership of the new site. After its removal last July, the UDC received an easement to the piece of property for the monument.

Ed Norvell, local philanthropist and descendant of one of the original UDC members who dedicated the statue, has raised approximately $65,000 to cover the costs of maintenance and site amenities, which includes security cameras, an 8-foot wrought iron fence mounted in concrete, brick pavers and lights. The Historic Salisbury Foundation was named the fiduciary agent in overseeing those funds.

Norvell said he and UDC members are working to provide additional parking for visitors, with the green space between Lee Street and the railroad being considered. The $65,000 raised is sufficient to cover those costs, Norvell said.

The city hired USA Drilling & Foundation Repair of Tennessee to install the foundation, Charlotte-based Cornette Iron Works for the fence and Salisbury-based Carolina Ground Solutions Inc. for the pavers. The soil posed a problem when placing the foundation, so pilings were required, with several weeks needed for drying time. The city has attributed the longer-than-anticipated process to weather, delays in finalizing contracts and other issues with contractors.

On Friday, the transfer from storage to the cemetery was conducted by Guy M. Turner Inc. of Greensboro, a nationwide contractor. The city estimates it cost $89,000 to remove, store and relocate the statue.

A handful of locals visited the cemetery Friday to witness the relocation. Christy Vasquez, a former Salisbury resident who now lives in Lexington, said it “wasn’t the best feeling” when the statue was removed last year because it had become something so many people were used to. But she was glad her two daughters and husband, Javier, were present to witness the relocation.

“It probably should have been here all along,” she said. “I’m more than OK with it being right here. And it will be protected here.”

Others were less enthusiastic about the relocation, including Salisbury resident Wade Rouzer, who said he was taught it should be interpreted as “the beginning of the end of slavery.”

“Growing up here, for a long time, I didn’t see it as part of the Confederacy. I just saw an angel,” Rouzer said. “We have come a long way. I hope everybody would begin to see it that way — a new beginning.”

Alexander said a pole near the statue will ultimately be replaced with one that will better support the lights and cameras.