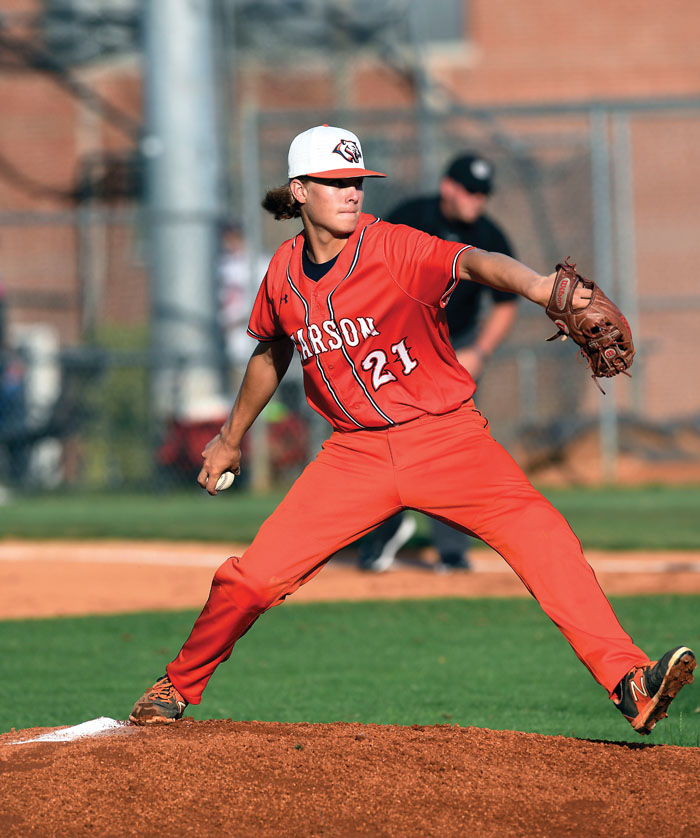 Hayden Simmerson has been a ‘difference maker’ for the team, not just on the mound but playing first base and swinging a big bat. File photo by Wayne Hinshaw, for the Salisbury Post

Carson, sponsored by Post 342, hopes to make history in the days ahead with a squad that has put up a 20-2 record. Carson outscored Davidson County and High Point 34-3 in three Area III playoff games.

Blake Cauble — a new dad, 26-year-old insurance man by day and baseball coach by night — is the head coach of the Carson squad. His father, Chris Cauble, has coached more wins than anyone in Rowan County high school history at West Rowan and Carson and is the “team manager.” This team has been so good that the veteran coach has been able to spend most of his summer at the beach. Also assisting are J.C. Alexander and Rob Hales.

This is actually Blake Cauble’s seventh season coaching Carson Junior Legion, so he got started when he was still a college student. He’s had some good teams, including the 2016 squad that was powered by youngsters Cole Hales and Luke Barringer and made the state tournament, but this appears to be the best one.

“We’re definitely having a lot of fun,” Cauble said. “The kids are playing the game very hard. When they do that, it makes it a lot easier game to coach.”

“We were very nervous back in June as far as what kind of turnout we’d have this year,” Cauble said. “But then we had 32 kids try out. We had to cut some pretty decent ballplayers.”

Tryouts were June 13. The team debuted on June 17 by hammering Concord, and hasn’t looked back.

“This team can hit and we’ve been putting runs on people,” Cauble said. “We lost two games to West Rowan when we had a bunch of  guys on vacations, but we 10-run-ruled West when we got everyone back. West had a good team. They would have made the state tournament most seasons, but it’s a smaller field this year with COVID.”

Carson has quite a few players who could have made an impact for Rowan County’s Senior Legion team.

Hayden Simmerson is one of the county’s rising stars as a right-handed pitcher. He pitches for a showcase team, so he’s rarely been on the mound for Carson, but he’s played first base and swung a big bat.

“We’ve had Hayden for just about every game, and he’s definitely a difference-maker,” Cauble said.

“Burleyson’s arm has made it hard for teams to run on us,” Cauble said. “Burris and Taylor are great defensively together up the middle. They remind me of Gunnar Hogan and Julio Zubillaga when they were at Carson back in the day.”

“There’s definitely a correlation there,” Cauble said. “This summer has given us a good bond. Keeping guys together for a summer makes everyone better.”

Normally a double-elimination event, the Junior Legion state tournament has a different look this year. The format will be like the one used in the American Legion World Series, starting with three days of pool play. The top two from the two pools advance to Sunday’s semifinals. Semifinal winners play for the championship on Monday.

The state tournament is being conducted at three venues — Finch Field in Thomasville, Holt-Moffitt Field in Lexington, and Truist Point in High Point.

There are a number of sideshow events on Friday, including a parade and a home run derby.