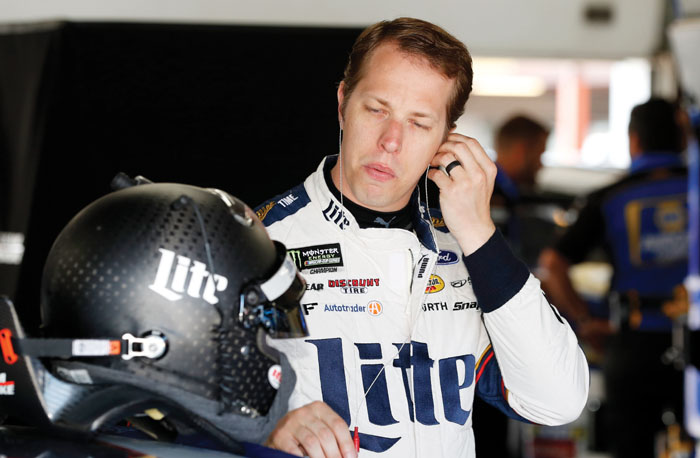 Brad Keselowski doesn't need to win today at Martinsville. but he does need a strong finish for the playoffs. (AP File Photo/Carlos Osorio)

CHARLOTTE — Brad Keselowski is ready to begin the “next evolution” of his racing career.

Jack Roush put a long-term vision for Roush Fenway Racing in motion Tuesday when the 79-year-old team owner introduced Keselowski as a new partner in the NASCAR team.

Keselowski is leaving Team Penske, where he won the 2012 championship, because he wanted an ownership role in an organization as part of his legacy in NASCAR. With Roush Fenway, Keselowski will not only drive the No. 6 Ford next season but have a considerable role off the track.

Keselowski will replace Ryan Newman, who drove the Roush flagship car the past three seasons.

Keselowski said he had four reasons for joining Roush Fenway: a long-term driving contract, being in a leadership role with the team, taking on an ownership role and having a place in the sport when he retires from driving. He likes the competitive future of the team particularly, with the advent of NASCAR’s next generation car.

“I think I am buying into a stock that is about to go up,” Keselowski said during a news conference at the NASCAR Hall of Fame.

Said Roush: “He’s ready for the next challenge and I welcome him as a partner.”

Although terms were not disclosed, team President Steve Newmark said Keselowski paid for his “minority” stake in the team but neither Roush nor the Fenway Sports Group relinquished any shares. That stake could increase over the years, Newmark said.

The company will continue to be called Roush Fenway Racing for now, though changes could come later.

“It’s a win when you can get a Hall of Fame driver behind the wheel, but what was more important is the leadership skills that Brad brings,” Newmark said.

Roush fielded his first car in 1988 for a full Cup Series schedule with Mark Martin in the No. 6, the original number of Roush Racing. The team has fielded cars in all three NASCAR national series and has 137 Cup victories. Kurt Busch gave Roush his only Cup title in 2004. Greg Biffle won Xfinity and Truck series championships for Roush, while Carl Edwards and current driver Chris Buescher also won Xfinity titles.

Keselowski said he never seriously considered trying to keep the No. 2 car that he has driven or get into the No. 29 car that has ties to his family legacy.

Keselowski and Buescher will be the only two drivers for the 2022 season, though the organization could explore adding a third driver in the years to come. Newmark said the team tried to find a way to keep Newman, even in a part-time ride.

The team has been on a slide for several seasons with a pair of Ricky Stenhouse Jr. victories in 2017 the only Roush Cup wins the past seven seasons.

Keselowski admitted over the weekend it was “hard to walk away” from working with Roger Penske but said he wants to have a legacy in racing that goes beyond being a driver.

“This is a big dream of mine to be an owner and partner at the NASCAR level with the right ownership group,” Keselowski said.

He will have a significant role on the competition team but it will remain a collaborative effort with Roush Fenway.

The seeds of the partnership were planted last fall when Newmark and Keselowski were having a conversation about NASCAR’s next gen cars and the state of the sport.

As Newmark discussed the organization’s eventual succession plans with Roush Fenway Racing, Keselowski told him he wanted to establish a legacy of being a leader in NASCAR beyond just being a driver. Talks continued after that and both sides decided it was a mutually beneficial partnership.

Roush anticipates the decision will spur other older owners to think about their legacy plans — and other drivers to follow the path of Keselowski and Tony Stewart before him.

“I don’t think Brad is the last of the drivers who will say I want a piece of the action when they get out of the driver’s seat,” Roush said.

As for Roush, he said he has no immediate plans to retire as owner, joking that he will still plans to be at the track on race days to be a “nuisance” to his drivers.

Keselowski wouldn’t put a timetable on when he might step away from driving, saying that as long as he’s still winning races and competing for championships he will remain behind the wheel.

But it’s clear he was ready to establish a legacy in the sport beyond being just a driver.

The 37-year-old Keselowski has won 35 Cup races during his his career. He has one won Cup race this year along with seven top-five finishes, and he currently ranks ninth in the standings heading into the summer break.

He will continue to race for Penske Racing for the remainder of the season.