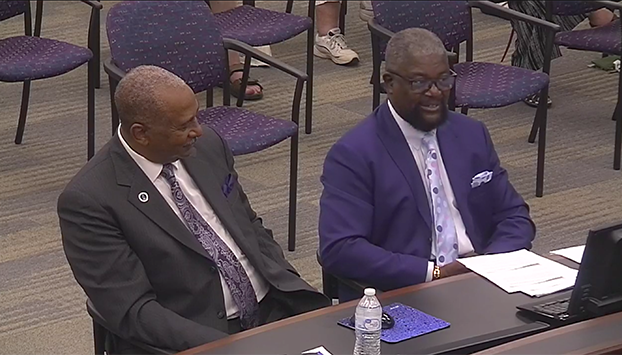 Anthony Wade and Willie Ratchford, who were hired by the city to examine the Salisbury Police Department, deliver their report Tuesday.

SALISBURY — Charlotte-based WPR Consulting on Tuesday told City Council members racial issues exist within the Salisbury Police Department due to a lack of discussion about them among personnel.

Consultants Willie Ratchford and Dr. Anthony Wade presented findings from a monthslong diversity, equity and inclusion assessment conducted with input from police personnel, the city manager’s office, the Human Relations Council and community groups such as the Salisbury-Rowan NAACP and Actions in Faith and Justice. The findings drew on hours of interviews and “safe space” focus sessions. Additionally, past media coverage, the city’s racial and ethnic demographic data and the history and diversity of the department were factored into the assessment.

Other findings show those with different perceptions of a racial divide don’t talk with one another about their feelings. Wade said during the “safe space” sessions personnel were encouraged to, and ultimately did, “speak their minds and their truths.” Those sessions, he said, provided the opportunity to discuss issues with respect, tact, courtesy and professional conduct.

“The SPD, in and of itself, is not racially divided,” the presentation stated. “However, there is a sense that there are individuals who were employed by the department who have engaged in behavior that may be viewed as racist.”

In addition to different perceptions about a racial divide, the assessment found many Black and white personnel believe the department has generational division caused by an age gap. Wade said younger personnel didn’t necessarily share the same perceptions of race as the older, more seasoned officers, which he said could speak to the different generations’ experience dealing with racial issues.

Another factor, some personnel said, is “the media and its narrative about race.” Wade specifically referenced the period of civil unrest following the death of George Floyd, who was killed by a Minneapolis police officer in 2020.

Wade said an observation that didn’t make it in the report was the “debilitating” battle Black officers faced during the summer of protests from other Black residents, who berated them for choosing to be an officer. Focus sessions allowed those officers to detail the different experience they have as Black officers, which Wade said led to heartfelt remarks about the support and love officers feel for one another within the department.

“We don’t fear people whose stories we know,” Ratchford said.

One of the findings stated Black and white personnel held the perception elected officials utilize issues within the department politically.

Mayor Pro Tem Al Heggins asked for clarification on that point. Wade said the perception was that some elected officials taking part in the protests were perceived to be taking a stance against police. He added that it was an example of “intent vs. impact.”

The findings also said there is a perception among Black and white personnel at the police department that the severity of discipline or reprimands are based on the officers’ race, age or who one knows within the department.

The firm also said the department and the city should be “more intentional in telling its own story about the great things that happen in the department around positive community engagement.”

The firm’s recommendations included the design and implementation of a diversity, equity and inclusion strategic plan and a corresponding action plan for direction and goals, which the firm suggested be led by Human Relations Manager Anne Little. Police Chief Jerry Stokes said a point of contact within the department will help ensure personnel are receptive since it’s coming from someone on the inside.

The firm suggested the city and police increase its outreach to diverse populations to recruit more people of color. One suggestion was to bring officers to churches or schools.

The presentation suggested a demographics and discipline audit of the department. Stokes said the department is in the process of assessing discipline with a third-party firm, with an audit to come in the future.

Additionally, Stokes said he’s been working with the department’s advisory board to formulate ideas about storytelling for Salisbury’s neighborhood-based policing efforts.

For Salisbury city government, the firm recommended officials review policies and ensure they’re being applied with a diversity, equity and inclusion lens. It also recommended an anti-hazing policy. Wade said multiple personnel told the firm they experienced some levels of hazing from jokes made with racial implications that they didn’t find funny.

Following the presentation, a three-minute video was shown, depicting the firm’s vision for what Salisbury can be. The video included pictures of Salisbury Police officers engaging with members of the Salisbury community over the previous few years.

Heggins said she was concerned with a proposed training program because it only spanned six to eight hours and it can take much longer to unlearn racial biases. Heggins added that she’d like to see more guidance on dismantling racist systems beyond the person-to-person level and wants to ensure whoever is the designated point of contact for seeing these goals through is protected when the council changes in future elections.

During the public comment period held before the presentation, members of Women for Community Justice, including Mary Walker and Carol Pomeroy, echoed previous calls in May for transparency related to the suit filed by Stephanie Bottom, a 68-year-old Black woman from Georgia, who alleged excessive force following her treatment at the end of a 14-mile chase involving local law enforcement officers on Interstate 85 in 2019.