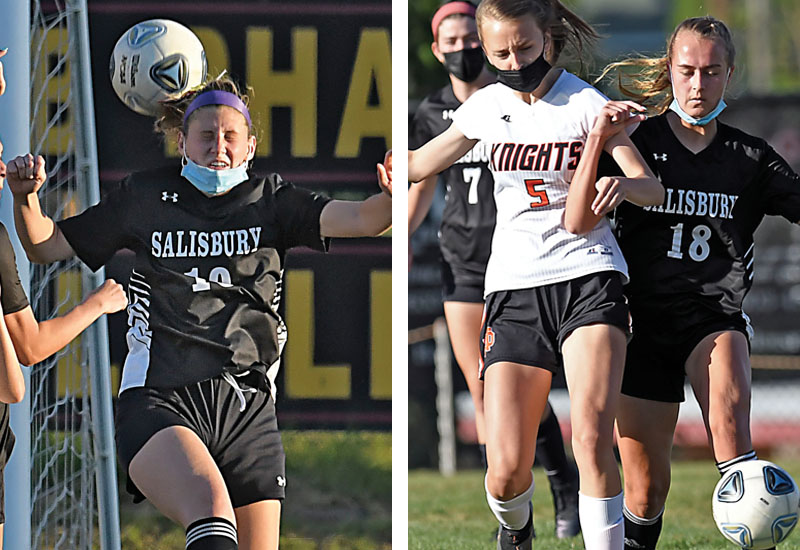 Kathryn made the All-Central Carolina Conference team as a sophomore, and Parrish was understandably proud of her.

“That’s when she told me her little sister was in the sixth grade and was better than she was,” Parrish said. “I told Kathryn not to be so hard on herself. She said, ‘No, I’m totally serious.'”

That kid sister was Lillie Rusher, and when Parrish saw Lillie in action for the first time for Knox Middle School, he realized immediately Kathryn wasn’t kidding.

In time, Lillie would have a Knox teammate who was equally advanced in the nuances of soccer. That was Piper Muire.

Salisbury graduates Rusher and Muire arrived in Greensboro on Sunday and will play in tonight’s East-West All-Star Game at MacPherson Stadium. Salisbury has never had a girl chosen for the game. This time, the Hornets have two.

Rusher is a 5-foot-6 defender. Muire is a 5-foot-6 defensive-minded midfielder. While they were mostly about goal prevention, they always were instrumental in the Hornets’ offensive production. Muire scored 48 goals for the Hornets, mostly headers off set pieces, and added 29 assists. Rusher accounted for 85 assists, a school record, and somehow scored 25 goals herself. Both were honored as Central Carolina Conference Defensive Player of the Year. Rusher twice; Muire once.

COVID-19 crushed all but three games of their 2020 season and sliced their strong 2021 season in half, but Salisbury went 60-6 during their high school years.

“I never took for granted for a moment how lucky I was to get to coach those two, and especially to get to coach them together,” Parrish said. “They were the heart, the soul, the guts of really good teams. Lillie the quieter one and Piper the more vocal one. They had different strengths and weaknesses, but when you put them together, they made an incredibly formidable duo. They could have played soccer for any school in this state — 4A or 3A, private or public, whatever.”

Both made the 2A All-State team, along with Salisbury’s rising senior Sutton Webb.

Parrish will drive to tonight’s all-star game as a solo act.

He’ll say hello to the Muires and the Rushers and to any Salisbury fans he encounters, but he plans to sit by himself. He’s not anti-social, but he doesn’t want any distractions or any conversations.

‘I’ve been telling people for the last three weeks that I’ve got plans for Tuesday,” Rusher said. “This is the last time Lillie and Piper will play together and I’ve seen pictures of them playing together when they were 5 years old. This is a meaningful night. I don’t want to miss a second of it. I want to just sit back and take a deep breath and take every bit of it in.”

For high school coaches in any sport, coaching is about relationships, more than wins and titles. Salisbury soccer, in particular, has frequently been an on-going family affair for Parrish, who coaches Salisbury’s boys and girls.

“I just finished up with the last of the Cardelles and now it’s the Muires and the Rushers,” Parrish said.

Parrish will always have the hair bow, however.

Kathryn Rusher wore that hair bow for four years, while playing for the Hornets. She passed it on to Lillie, who wore it for the next four.

The Rushers had the bow framed, wrapped it up and handed it to Parrish.

He knew it might be emotional, whatever it was, so he carried it out to the parking lot to open it. He’s glad he did.

“That hair bow brought tears to my eyes,” Parrish said.

Rusher, who will have to break out a new hair bow tonight, loves soccer most, but she also was one of the best tennis players in 2A.

She’s headed to Catawba College to continue her soccer career. Ashley Dohme, one of her elementary school teachers at Overton, is her role model and she plans to major in English and secondary education.

“I’m excited to play in the all-star game and extremely grateful for the opportunity,” Rusher said in a news release. “I’m looking forward to competing and gaining more soccer knowledge from different players across the state. Playing against these high-level players will be good for me to prepare for my fall college season.”

For Muire, it was a difficult decision between college soccer or her dream academic school. She chose academics.

She’s headed to the University of North Carolina — Chapel Hill and plans to major in business administration.

A Rowan Helping Ministries volunteer, her goal is to go to work for an organization that has giving back to the community as part of its mission.

“It’s an extreme honor to be selected to play in the all-star game,” Muire said. “Playing with other top-level players will be an awesome way to end my soccer career.”

Female Athlete of the Year: Salisbury’s Webb shined in…