All Aboard: Volunteers work to get train rolling again at NC Museum of Dolls, Toys and Miniatures 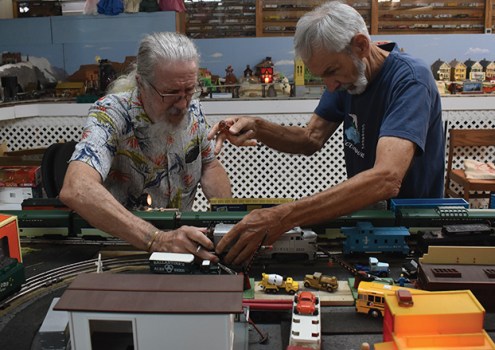 Allan Jung and Ed Klebaur are working in tandem to get the train display at the NC Dolls, Toys and Miniatures Museum back up and running. The display was put on pause for over a year due to COVID-19. Ben Stansell/Salisbury Post 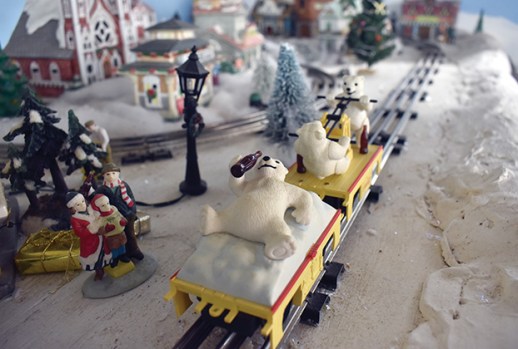 A polar bear enjoying a bottle of soda is one of the many pieces of the intricate train display. A large section of the display is related to Christmas scenes. Ben Stansell/Salisbury Post 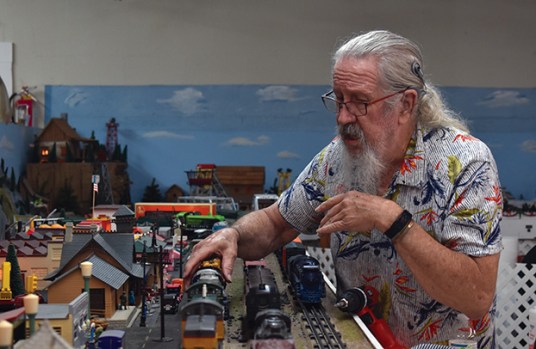 Allan Jung examines several of the train cars on the track in the NC Dolls, Toys and Miniatures Museum. Jung is one of two volunteers who are working to refurbish the trains. Ben Stansell/Salisbury Post 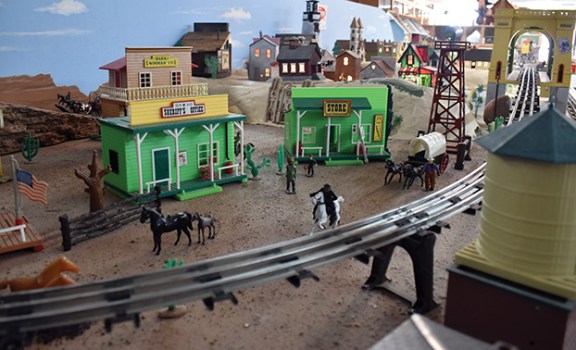 Scenes along the train tracks include an old western town complete with a Sheriff's Office and store. There are also Christmas villages, ponds and neighborhoods along the route. Ben Stansell/Salisbury Post 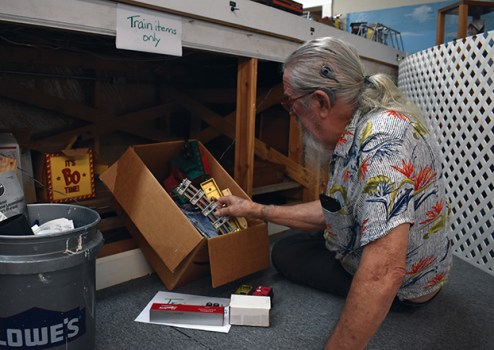 Allan Jung sorts through a box of "train items," looking for any objects he might need to inventory. Jung was tasked with getting the train set up and running before and is doing so again, this time with the help of Ed Klebaur. Ben Stansell/Salisbury Post

SPENCER — In the back of the N.C. Museum of Dolls, Toys and Miniatures, past the intricate dollhouses and puppets, a five-track model train display spans snowy mountains and bridges while winding through old western towns and Christmas villages.

The train set was donated to the museum, located at 104 Fourth St. when it opened in 2012. To get the large display into the building, the front windows of the museum were taken out, and the set was carried inside piece by piece with the help of a small Bobcat front loader.

The middle portion of the set is carved out into a spacious standing area, which gives spectators a 360-degree view of the trains and the journeys they take around the tracks.

“The kids, oh my gosh, they love the trains,” said Beth Nance, founder of the museum. “They cannot get over all the moving parts and pieces, the waterfall. They’re absolutely enamored. Their eyes light up. They squeal with delight. They think it’s the best thing they’ve ever seen.”

For more than a year, those joyful squeals have been nonexistent. When the museum temporarily closed its doors during the COVID-19 pandemic, the trains were taken off their tracks and packed away.

With the museum open to the public again, Nance needed someone with the expertise to get the trains running. She found the perfect volunteers in Ed Klebaur and Allan Jung, who were recruited for the job by Kathy Gregg, a volunteer and member of the museum’s board of directors.

The train set, Nance said, is intricate to maintain.

“If it’s a doll, Kathy and I can wash the clothes or fix the hair,” Nance said. “But if it’s a train set, it takes a little bit more finesse and knowledge.”

The task was welcomed by Klebaur and Jung, both of whom grew up playing with train sets when miniature tracks were almost ubiquitous in American households in the 1950s and 1960s.

“My father got me into it when I was four years old and he was into trains when I was young,” said Klebaur, who was born and raised in New Jersey. “I grew up with trains in what we call the post-war era of trains.”

Like Klebaur, Jung’s first train set was also bought for him by his father, who got the idea from their upstairs neighbor.

“My parents rented the upstairs out to a guy who was into train collecting,” Jung said. “He had one whole room dedicated to trains. So, my Dad decided it’d be a good idea that he built one for me.”

When Klebaur and Jung grew up, their jobs, families and adult responsibilities took precedence over their passion for trains. While Klebaur kept his childhood track in his attic, Jung said his train set was sold at a flea market.

In their retirement, both men have picked up the nostalgic hobby.

Jung, who lives in Lexington, was recruited two years ago to refurbish and reinvigorate the train set at the N.C. Museum of Dolls, Toys and Miniatures. He is now being assisted in that endeavor by Klebaur, who moved to Salisbury from New Bern less than a year ago.

The two men, both of whom have backgrounds in electrical engineering, only started working on the train set in the previous couple weeks. Now, they’re in the process of taking inventory of what trains and accessories are there. Jung has been rummaging around underneath the tables holding the tracks, where much of the equipment was stored.

The train set is composed almost entirely by cars made by Lionel Trains — the “gold standard” in model trains. Founded by Joshua Lionel Cowen in New York in 1900, the storied company was bought by General Mills in 1969 and is now headquartered in Concord. Both Klebaur and Jung had Lionel sets growing up.

One of the few model train-related items Klebaur kept when he moved to Salisbury in October was a book specifically on Lionel trains. That manuscript, he said, will come in handy during this project.

As they examine the train cars and the tracks they sit on, Klebaur and Jung are doing detective work to determine why some of the trains aren’t functioning properly. From there, they’ll fix what they can and clean the tracks to ensure the trains connect to the electricity and run properly.

“It’s definitely a challenge to get it going,” Jung said.

But it’s the challenge of the project, Jung said, that he enjoys.

With several hundred feet of track and dozens of cars to inspect, the project will likely take the two volunteers a significant amount of time.

With only one paid employee, the N.C. Museum of Dolls, Toys and Miniatures relies heavily on volunteers. There are currently less than a dozen people who give their time to the museum. Those volunteers do everything from dust the minute features of every doll to take guests on tours and explain the historical significance of the museum’s collections.

“This is a community museum. So, without volunteers, we can’t run as efficiently as we want it to,” Nance said.

The only thing someone needs to have to volunteer is a passion for history, Nance said. The museum plans on implementing a volunteer coordinator in the coming months and will host a volunteer seminar in the fall.

“We’re always looking for volunteers,” Gregg said. “We like volunteers who enjoy this kind of hobby.”

More information about the N.C. Museum of Dolls, Toys and Miniatures can be found online at NCMDTM.com, by emailing info@ncmdtm.com or by calling 704-762-9359. The museum is open Thursday through Saturday from 10 a.m.-4 p.m.