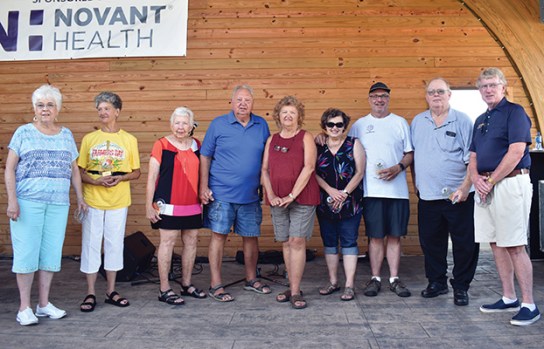 From left to right: Judy Haire, Barbara Doby, Kay and Pete Kluttz, Janice Jenkins, Carole and Tom Brooke, Gene Long and Randy Lassiter were honored Saturday for the role they played in the founding of Farmers Day. Ben Stansell/Salisbury Post 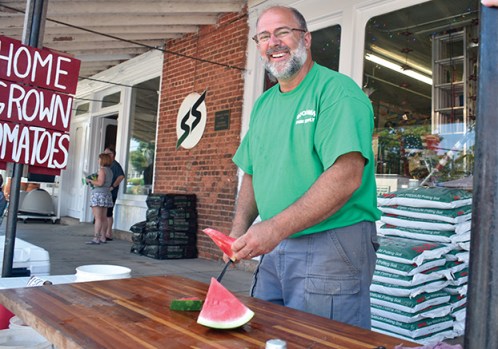 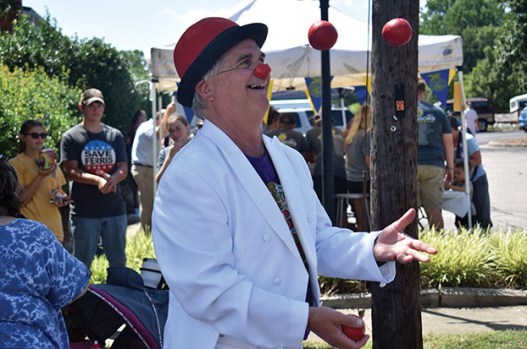 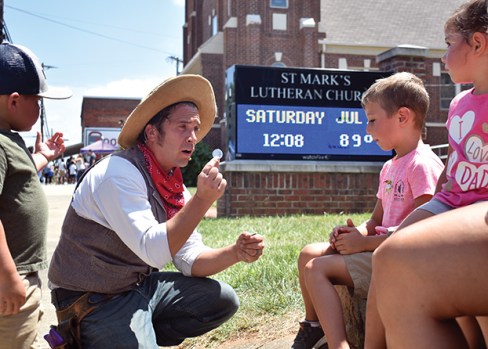 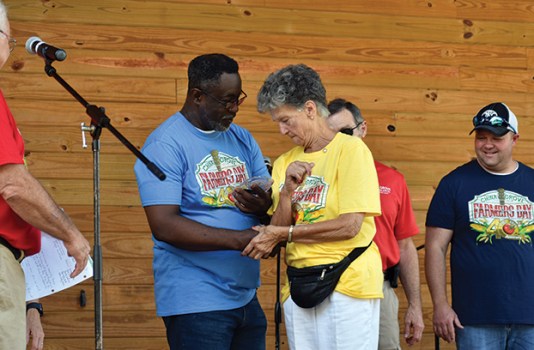 China Grove Councilman Arthur Heggins hands Barbara Doby a plaque for the role she played in founding Farmers Day. Doby was one of over a dozen people honored for initiating the celebration four decades ago. Ben Stansell/Salisbury Post 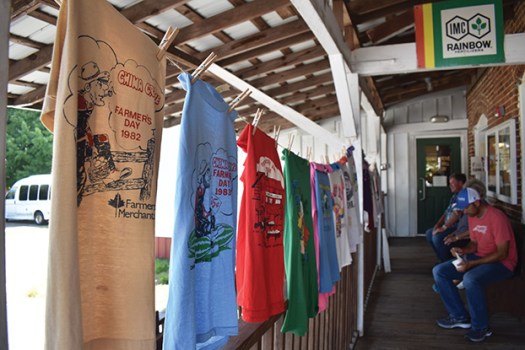 A string of old Farmers Day shirts was strung up outside of the China Grove roller mill. Originally, the shirts were only given out to festival volunteers, but soon they became available to anyone who wanted to purchase one. Ben Stansell/Salisbury Post 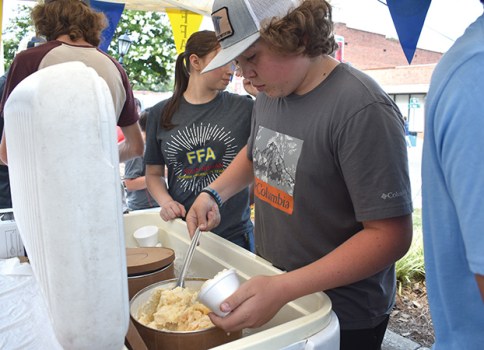 George Crainshaw, a Future Farmers of America student at South Rowan High School, scoops a dollop of homemade peach ice cream into a container. The booth's fruit-flavored dessert was a hit during a scorching hot day. Ben Stansell/Salisbury Post 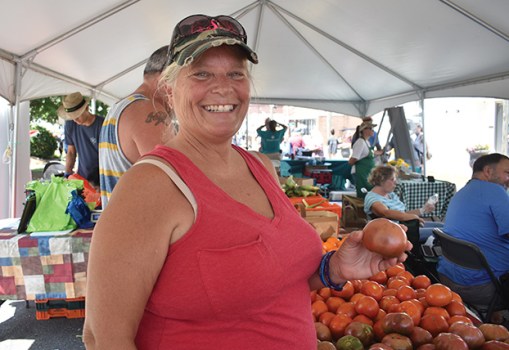 Beth Beaver Tapp holds up a Cherokee Purple heriloom tomato, which was for sale at the booth run by Miller Farm Fresh produce. Ben Stansell/Salisbury Post 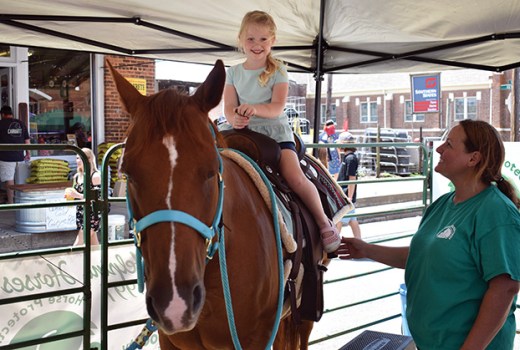 A young girl smiles while seated on the back of Scooter, a horse brought to Farmers Day by the Horse Protection Society. The China Grove-based organization rescues, rehabilitates and places horses. Ben Stansell/Salisbury Post 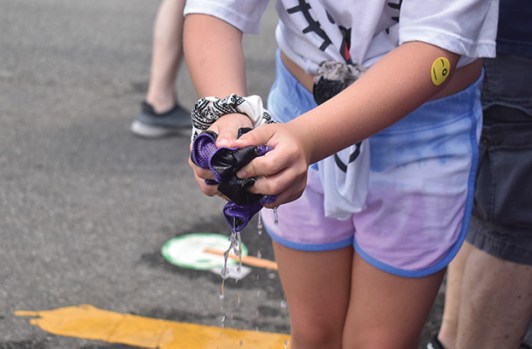 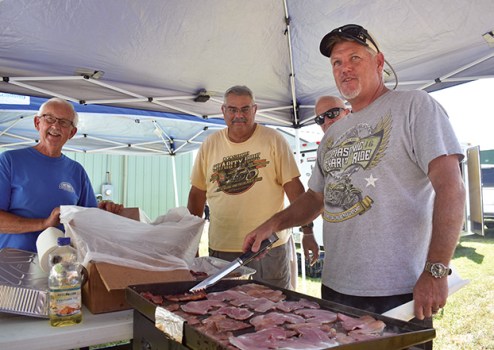 Brian Craft mans the grill at Eureka Masonic Lodge's both during Farmers Day. The lodge has been serving up country ham sandwiches at the festival for years. Ben Stansell/Salisbury Post 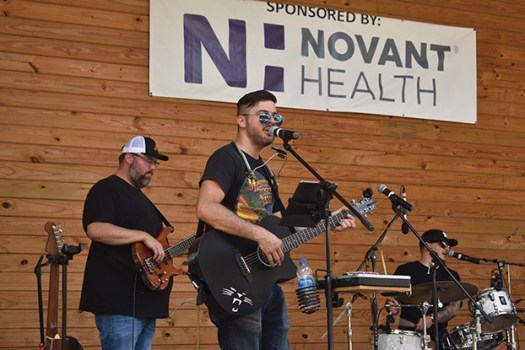 There was plenty of live music played on the Hanna Park stage during Farmers Day. Ben Stansell/Salisbury Post 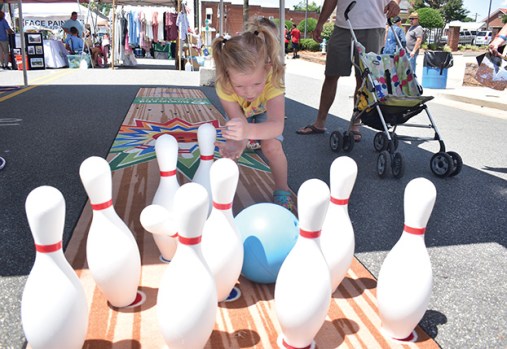 CHINA GROVE — Judy Haire still remembers walking onto the stage in downtown China Grove in 1982 and looking out at the crowd.

“We all had been working that morning getting ready, and we finally got on stage and looked out and there were people everywhere,” Haire said. “We didn’t know where they all came from. It just grew from that.”

On Saturday morning, Haire once again found herself on a stage during Farmers Day. This time, she was one of over a dozen people honored for initializing China Grove’s most popular and cherished celebration. The founders of the festival were recognized through a special presentation on the Hanna Park stage for the 40th anniversary of the event.

“While there have been a lot of people through the years that have helped make Farmers Day what it is, it was this original group that had the vision and started this annual event,” said China Grove Mayor Charles Seaford.

After last year’s Famers Day was turned into a virtual event, thousands of people returned to the town Saturday to celebrate in-person in the traditional way. Melissa Duncan, who has been living in China Grove for more than a decade, said she was thrilled to attend another Farmers Day.

“There’s something about living in a small town, where they do this and the community all comes together, it’s special,” Duncan said. “We definitely missed that sense of community last year, even though the town did good things to get people out and moving.”

Duncan brought her neighbor and friend, Anna Worley, with her this year. Worley, who recently moved to China Grove from New Jersey, said she was enjoying meeting her new community.

“Everybody is so nice in China Grove,” Worley said.

Whether it was their first time at Farmers Day or their 40th, Seaford said he was proud to see that people were relishing the day.

“I think we’ve met our goal, which is that everybody is having a good time,” Seaford said.

The fact that the town would be able to host the event as normal this year was still in question until late April — when China Grove’s event planner Patti Price Love scrambled to organize the festival in time.

“You don’t single out any particular person, but (Love) is really the nucleus of this whole situation,” Seaford said. “While she’s the nucleus, it took all of the town people, from (Mike) Zimmerman at the fire department, Andrew (Deal) with the police department, Dave (Ketner) the director of public works. It took all of them pulling their departments together and saying: these are the things we’ve got to get done.”

Despite the short notice, many of the festival’s staple vendors set up booths on Saturday, including South Rowan High School’s Future Farmers of America club. The FFA has been serving up ice cream since Farmers Day started decades ago.

More than 50 current and past students gathered at the school on Wednesday to churn out 60 gallon and a half-freezers of the creamy dessert. The ice cream is always hand turned and is filled with fresh fruit like bananas and peaches. The strawberries used in one of its most popular flavors were grown on campus. The ice cream made at South Rowan used to be churned at the China Grove Roller Mill, said South Rowan High School Teacher David Overcash.

Although ice cream is no longer made within its walls, the Roller Mill was a popular attraction during Farmers Day. The historical structure was filled with guests who wandered through its rooms looking at old milling machines or perused one of several Farmers Day scrapbooks. The Roller Mill, managed by Rowan Museum, will be open from 1-4 p.m. every third Saturday of the month through October.

With its drafty interior, the Roller Mill was also popular among people looking to beat the heat for a few minutes.

Commonly referred to as the hottest day of the year, Farmers Day lived up to that billing Saturday. With temperatures in the mid-90s and the heat index a few degrees higher, attendees looked for any and all ways to cool off. Churches and other civic organizations handed out free water in bulk.

One popular method was to drench a Novant Health towel in chilly water and wear it around like a scarf. Another was grabbing a chilled slice of watermelon from Alan Goodman, who was slicing the fruit with his trusty blade outside of Goodman Farm Supply shop.

“Everybody likes a cold bite of watermelon,” Goodman said. “They don’t want a whole bunch. Three bites, four bites, that’s plenty. This is something we have available. We have Gary’s Barbecue that can chill them for us, bring them here, serve it and everybody loves it. This is one of the things they’ll remember about Farmers Day.”

Barbara Doby, another one of the Farmers Day founders honored, has plenty to remember about the festival. But the fact that the spirit of the event has stayed the same was on her mind as she listened to a concert in Hanna Park on Saturday afternoon.

“Farmers Day can’t be changed except for little nicks here and there because it’s all about giving,” Doby said.