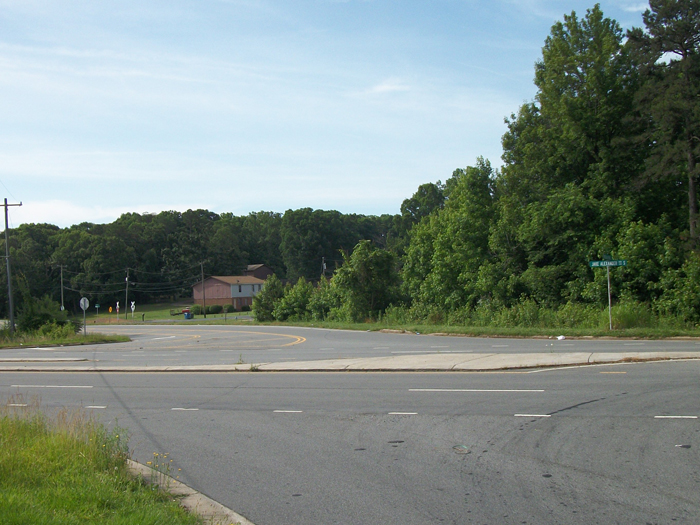 Submitted photo -- The intersection of Jake Alexander Boulevard and Morlan Park is an area of concern for residents who use it.

Anybody with common sense would determine straight across is safer unless you are the city management and City Council who don’t live in the east side and don’t use Morlan Park Street every day.

It has been five years since the city and city council wouldn’t listen to the Morlan Park neighborhood and closed our only street to through traffic, making it dangerous and inconvenient by forcing the users to U-turn to get to their homes.

The city and council were unresponsive for eight years prior to the closing to the Morlan Park neighborhood’s request to cut down the trees and bushes and mow the grass that was blocking the view to see oncoming traffic.

The Morlan Park citizens met with and gave a drive through to the city manager, city engineer, mayor, mayor pro tem, and two state DOT officials to show the forced inconvenience and dangerous proposal the City Council approved. All of them said they couldn’t see oncoming traffic because of the trees, bushes and high grass was blocking the view. All of them refused to make the U-turns at the intersection and at the stop lights. All said it was too dangerous and there wasn’t enough room to make the U-turn with a car.

Yet, the city officials, who don’t live in the area or drive the area, forced Morlan Park citizens and others to do something they refused to do because it is too dangerous.

No provision was made for pedestrians, bicycles and or baby strollers crossing to go to the only community park on the east side.

The Morlan Park citizens cut down the trees and bushes when the city refused to get it done. This allowed a clear view of oncoming traffic, but the city wouldn’t listen and had already made up their mind to shut us out of the city.

The city has money to remove pavement and repave three low-traffic blocks around a new $12-million dollar park but no money to improve or add additional community parks for kids to play at. There’s no money to add pavement to the edges of narrow Carolina Boulevard that handles the diverted traffic problem through our once-quiet neighborhood. School buses, SUVs and pickup trucks with trailers are forced to drive in homeowners’ yards when traffic is going in both directions, creating ruts at the side of the road.

At a recent City Council meeting, members approved spending more money to make a more-dangerous U-turn knob on Jake Alexander Boulevard. The SUV and pick-up trucks need all five lanes to make the U-turn, not two lanes and knob to turn.

The state tore up five streets and yards in the Morlan Park neighborhood transporting the heavy paving equipment to a church parking lot when paving part of Jake Alexander Boulevard. Should we expect the same damage again with the knob or will the city protect us? The Moran Park neighborhood for years has requested a knob at the intersection of Crown Point and Carolina Boulevard to prevent the long deep ruts in the homeowner’s yard where the city trucks and school buses can’t make the U-turn.

Should the city motto be “The No Turn U-turn City”?

The city is working on a comprehensive plan. Will the east side requests and needs be ignored again? It is time to grind down 40 feet of the intersection to allow through traffic and correct the big five-year, dangerous Morlan Park mistake.