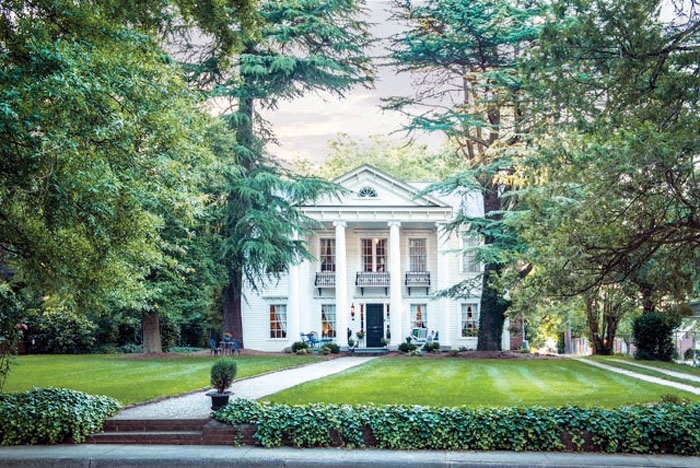 Salisbury prides itself on being a historic town — and rightly so. It has an abundance of historic buildings, most of which have been well-preserved or restored to their former glory. The signs on Interstate 85 don’t just say “Salisbury” — they announce “Historic Salisbury.” Thousands of people visit our town each month to walk through our historic neighborhoods, shop or dine in our historic downtown, or tour the interiors of historic homes each October.

Some people regard historic preservation as a burden. Granted, it takes a significant amount of time and money to rehabilitate and maintain a historic building. But, in addition to driving tourism, historic preservation actually enhances the values of properties in historic neighborhoods. According to the National Park Service, “Preservation enhances real estate values and fosters local businesses, keeping historic main streets and downtowns economically viable. Money spent rehabilitating historic buildings is actually an investment in the future.”

There are two organizations in town whose principal concern is historic preservation: the Historic Preservation Commission (HPC) and Historic Salisbury Foundation (HSF). Because their acronyms are similar and they are both concerned with historic buildings, many people either conflate them or are unsure of what each one does. In this article, I’ll attempt to differentiate the two.

The Historic Preservation Commission (HPC) is a part of the government of the City of Salisbury. Established in the late 1970s, the HPC consists of nine commissioners, appointed by the City Council. It meets on the second Thursday of each month to consider certificates of appropriateness (COAs) for work done to buildings in Salisbury’s five designated local historic districts: Brooklyn South Square, West Square, Downtown, Ellis Street Graded School, North Main Street, and West Square. (There are other historic districts in Salisbury, including the Salisbury Railroad Corridor, Livingstone College, and Fulton Heights, but these are not under the jurisdiction of the HPC.)

At each meeting of the HPC, the commissioners consider applications for work on the exteriors of buildings in the five local historic districts. (The HPC has no say about work on the interiors of buildings.) After listening to a presentation made by city staff and hearing from the applicants, the commissioners deliberate, using design standards adapted from those established by the North Carolina State Historic Preservation Office and the National Park Service, and render a decision. Many cases involve windows, roofing, siding, and decking materials. Although the standards encourage the use of historic materials, the commissioners can take mitigating circumstances into account when rendering their decisions. The HPC also considers applications for local historic landmark status; several properties (including the Empire Hotel and Historic Salisbury Station) have already received this designation, entitling them to tax breaks but subjecting them to the jurisdiction of the HPC.

Historic Salisbury Foundation (HSF) is a nonprofit (501C3) organization whose mission is to “preserve, protect, and revitalize the historic fabric of Salisbury and Rowan County.” Founded in 1972, HSF is responsible for the preservation of many of the historic structures that define Salisbury, including the iconic Bell Tower, Historic Salisbury Station, and the Dr. Josephus Hall House.

In addition to advocating for the preservation of historic buildings, HSF buys and sells houses through its “revolving fund.” Once a property is purchased, HSF volunteers stabilize it to make it structurally sound and weather-tight. Then the property is sold at a reasonable price to a buyer who agrees to finish the restoration of the property on a timely basis. To ensure this, HSF places protective covenants on the property which, in addition to setting a timeline for the work to be done, specify features of the house—both exterior and interior—that must be preserved.

Over 120 houses have passed through HSF’s revolving fund over the course of the past 50 years. Some of them, such as the Fulton/Mock/Blackmer House on S. Fulton Street, are probably familiar to you. But you’d be surprised at all the other houses and buildings that have been — and continue to be — preserved through the efforts of Historic Salisbury Foundation. The owners of these buildings (as well as a few houses on which owners have voluntarily placed covenants) must ask permission from HSF to make any changes to features listed in the protective covenants. HSF has no say on what is done to houses that don’t have restrictive covenants — that’s the job of the HPC.

In addition to advocating for historic preservation and saving historic homes, HSF holds events that promote and celebrate historic preservation, most notably the OctoberTour of Historic Homes. It also sponsors three History On Tap (HOT) events each summer, hosts classes and concerts on the Hall House lawn and supports a Preservation Awards program. The foundation offers tours of the 1820 Hall House Museum, rents the grand waiting room of the Historic Salisbury Station for events, runs an architectural salvage warehouse, and, in conjunction with the Rowan Museum, sponsors a series of classes on the history of Rowan County.

The H is for Historic

The common thread between the HPC and HSF is the H — a concern with historic preservation. The HPC does so by reviewing applications for changes to the exteriors of buildings in Salisbury’s five designated local historic districts; HSF does so through advocacy and moving properties through its revolving fund. Each, in its own way, helps to ensure that Salisbury continues to reap the benefits of being a historic town.

Pollinators and summer blooming flowers are loving the heat