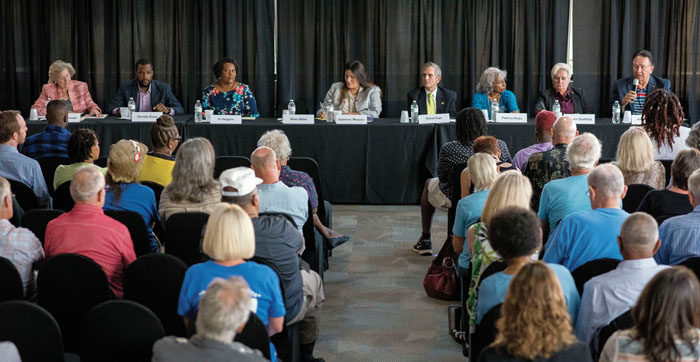 A forum for candidates for Salisbury City Council was hosted by Rowan Concerned Citizens at Aymer Center on the Hood Theological Seminary in 2019. Jon C. Lakey/Salisbury Post

Let’s make the next two years and the election that decides them unlike national politics.

In November 2019, as voters in Salisbury went to the polls, none would have predicted the scale to which the coming two years would supercharge pre-existing polarization trends in political, public and private life and create our current reality — where wide swaths of the public can’t agree on basic facts.

Voters might have guessed some of the major events for city government in the previous two years — the relocation of Confederate monument “Fame,” that commercial development plans in downtown Salisbury would gain momentum, two leaked videos showing police mistreatment of a K-9 and an elderly Black woman, concerns about crime finding their way back to the forefront of public conversations or City Manager Lane Bailey heading toward retirement.

But national political debates are the backdrop for and influence the way people react to local decisions. If it wasn’t already, the saying “all politics is local,” coined by former Speaker of the U.S. House Tip O’Neil, seems permanently flipped on its head.

The combination of COVID-19, a divisive presidential election and protests for racial justice produced lines that were sharper than ever between people with differing political opinions. In non-COVID times, the city of Salisbury might have organized a public forum or a series of community conversations to help people understand differing viewpoints and agree on a solution. The threat of COVID-19, however, meant tough discussions mostly played out on social media, where people tend to curate feeds they’re predisposed to agree with and those who have a different view are just a collection of pixels on a screen.

That social media allowed false and misleading information to run rampant about all three made it all but impossible to ensure wide swaths of people with differing political views absorbed realities behind anything.

The glimmer of hope lies in the fact that local election contests — county commissioners, school board, sheriff, city council and town boards — have remained mostly like traditional politics. Candidates are judged on their opinions on issues. They need to shake hands, kiss babies, hand out flyers, attend community events, raise money and prove they can do the job. Name recognition can win a race, but a cult of personality hasn’t yet kept someone from facing consequences — criminal or electoral — when necessary. It’s also just harder to spread dangerous misinformation about things like street paving, downtown development projects, water and sewer service or municipal finances.

Candidates can help keep the trend going by engaging with voters in person and not shying away from conversations where they might find sharp differences of opinion. Voters can do the same. Institutions such as the Salisbury Post, Rowan County Chamber of Commerce, Salisbury-Rowan NAACP, Livingstone College, Salisbury-Rowan Realtors and others can help by continuing to provide a forum for voters and candidates to have a good faith discussion about differences — whether it’s a debate or a meet-and-greet type event.

At the Post, we’ll do our part by continuing to provide a forum for readers to discuss differences via letters to the editor or My Turn submissions. We’ll also provide informative coverage about municipal elections by focusing our coverage on issues and asking tough questions when necessary.

As we start this election season, we want to hear from you — voters and readers in all municipalities. What questions are on your mind as this election season gets underway? What issues do you think are most important for the Salisbury City Council or your town board to address? Where do you think incumbents fell short and where do you see room for improvement? Where did the incumbents succeed?

We’ll stick to our usual rules for publication in the Post, including that candidate submissions are not allowed until after Election Day. If you want to express your opinion in print and online, email letters@salisburypost.com and keep submissions to 300 words or fewer. To offer suggestions for coverage or to submit a My Tun, which we limit to 700 words or fewer, email me directly at josh.bergeron@salisburypost.com.