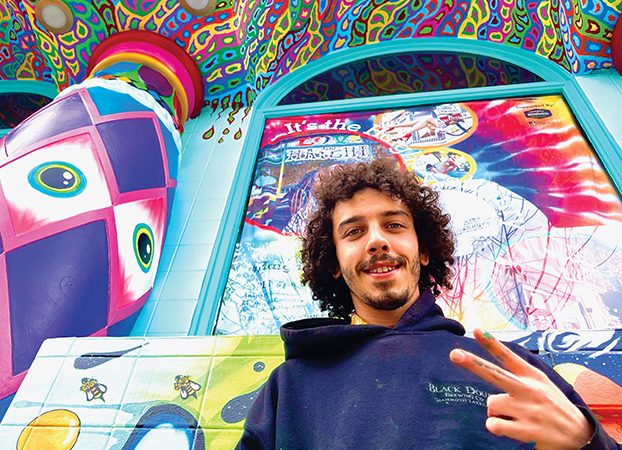 Ethan Strickland poses in front of the artwork he painted onto the arches outside of an iconic San Francisco tie-dye shop. Being commissioned to complete the painting could prove to be a breakthrough for Strickland's artistic career. Photo submitted.

SALISBURY — After bouncing around from seasonal job to seasonal job for most of his early 20s, Ethan Strickland decided to go all in on his dream.

A 2013 graduate of Carson High School, Ethan spent several years working in the mountains of North Carolina and the ski slopes of Colorado and California. Exhausted from the work and longing for something more, Ethan moved to New Orleans two years ago to pursue what had long been his passion — painting.

Ethan’s plan paid off last month when he was flown out to California to paint a commissioned piece on the outside of the iconic San Francisco tie-dye shop Love on Haight.

“Throughout the past years of making art, believing in it and believing in it, every now and then I’d stress myself out thinking about how things are going to happen or unfold to take the art career to the next level,” Ethan said. “I kept telling myself, ‘Just keep on painting. Don’t worry about the how. The how is going to work itself out.’ Then boom, this just fell into my lap.”

Raised in China Grove, Ethan traces his interest in art back to when he started drawing doodles in his notebooks during class. His passion for art was truly awakened at Carson High School.

“I had a really awesome art teacher in high school named Mark Riley at Carson who was really an inspiration,” Ethan said.

It was around then that Ethan’s father, Jim Strickland, realized his son had a special skill.

“Even then, he could draw a lot better than I ever could,” Jim said. “He was one of those people that had kind of a knack for it.”

When Ethan graduated, he didn’t yet see art as a viable career path. Instead, he entered the workforce and found a job at a local recycling company. After a couple of years of working there, Ethan moved to the mountains and got a job at the Nantahala Outdoor Center in Bryson City. From March through late October, he worked at the center before heading west during winter to work at ski resorts.

In the little spare time he had, Ethan continued to hone his artistic craft.

After the ski season ended two years ago, Ethan decided he needed more time and space to develop his painting prowess. Ethan moved from Mammoth Lakes in Northern California to New Orleans, where artistic expression can be found on almost every street. It’s also where Ethan knew a friend who welcomed him in with open arms.

“This internal decision happened where I decided that, with my time here on this planet, I’m going to make art,” Ethan said. “Wherever it goes, it goes. Ever since that decision, things have kind of been unfolding.”

Ethan’s artistic style has evolved over the years, but it isn’t altogether different from the doodles he started drawing as a teen. He specializes in piecing together colorful and vibrant lines into unique and cohesive patterns.

“It’s very organic stuff,” Ethan said. “It’s not representative of anything. I just kind of let flow whatever comes out.”

“That’s where my art took an evolution almost on a dime, overnight,” Ethan said. “I painted stuff for years that I didn’t genuinely love and then overnight it seemed like I had a breakthrough and started making art that I could actually feel good about.”

Most of Ethan’s work is completed on canvas, but he’s recently started painting his patterns on hats, shirts and other articles of clothing.

Ethan posts his paintings to Instagram, which is where the owner of a Love on Haight — a store in San Francisco’s artsy Haight-Ashbury District — first noticed his work. A representative from the shop messaged him out of the blue one day and offered him an all-expense-paid trip to the Bay Area for him to paint the arches outside of the shop. Other artists have also contributed to the colorful murals on the outside of the shop.

After his disbelief over the offer passed, Ethan found himself questioning whether he should seize the opportunity.

“Initially, having never done something like this, my brain went to an anxious, fearful place,” Ethan said. “I started making excuses as to why I shouldn’t or couldn’t do this.”

He pushed those doubts and accepted the job offer. Ethan flew into San Francisco on June 28 and started working the very next day. Although he’d painted on canvas and clothes before, it was his first time putting a colored brush to the side of a building.

“I’m actually working on a scissor lift so most of it has been painting upside down, which has been a challenge in and of itself,” Ethan said. “It’s a welcome challenge. I’m happy to be here doing it.” 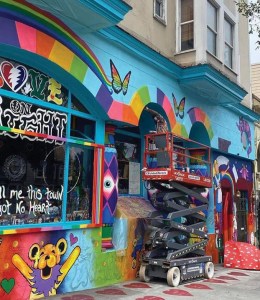 Despite never having completed a mural before, Ethan Strickland was commissioned to add a little more color to the outside of Love on Haight, a San Francisco tie-dye shop. Strickland completed the work over several days, painting mostly from a scissor lift. Photo submitted.

After completing the project, Ethan plans on packing up his belongings in New Orleans and coming back to Rowan County to visit his family. From there, he’ll move in with his brother in New Mexico and continue to follow his dreams.

He hopes his experience painting Love on Haight is a springboard for more opportunities.

“I definitely think after having this on my resumé and some photos of what I’ve done, I can score some other gigs doing street art on buildings,” Ethan said. “Aside from that, the shop itself has a huge online retail audience and also here in person at the shop, so I’m going to be partnering up with them and hopefully turning some of my work into shirts, hats, other stuff like that.”

Ethan’s work can be found and purchased on Instagram @artisethan.