A trip with Joe: JT Helms to ride motorcycle across country with memories of his father 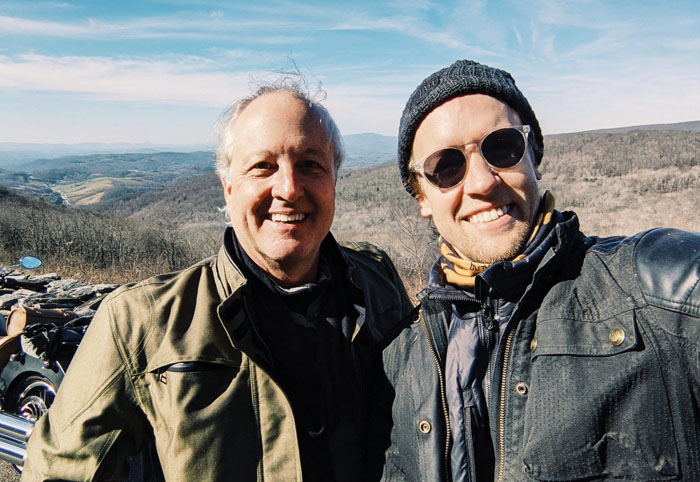 Perhaps some of you have already completed your summer vacation adventures. JT Helms is just beginning his.

JT left Saturday from his home in Charleston. He plans to spend the next eight to 10 weeks or so on a cross-country motorcycle trip. While he’ll take in the sights and visit friends along the way, one person will be top most in his mind: his dad, Joe.

Joe Helms, who lived in Salisbury, died in March. He and his wife, Julie, had visited their children, son JT and daughter Lindy, in Charleston. He thought the pain in his abdomen was muscle strain. After a couple of days in the hospital in February, he was diagnosed with stage 4 cancer and given two weeks to live.

He had been told he could prolong his life with some pretty intense chemotherapy. But Joe decided to live out his last days at the family farm in China Grove. His brother, Mark, moved out of the home place, and the rest of his family gathered round him. His other son, Josh, also came in from Chicago.

“The farmhouse has been in my family since my great-great-grandfather,” JT says. “We all grew up there. When my dad got sick, my Uncle Mark was sweet enough to give us free rein of the house.”

Family members rotated time with Joe around the clock.

“We spent as much time with him as we could,” JT says. “He gave us about three weeks after his diagnosis.”

A lot of people would meet such a diagnosis with resistance, JT says. Not his dad. “He closed his eyes, leaned back, and nodded. He went from fear to acceptance and from there, gratitude for everything he’d had. He wanted to have quality of life those last few weeks and make the most of it.”

JT and his dad had a lot of good conversations in those three weeks. His official shift was in the morning, what he called “the coffee shift.”

The pandemic gave them the gift of time. All last fall, they rode motorcycles — JT on his Triumph, Joe on his Indian, which he’d surprised his son by purchasing so they could ride together. They rode through Boone, the Uwharries, even country roads in Salisbury.

“I’d lived in Chicago for 13 years and we just hadn’t spent that much time together,” notes JT, a freelance graphic artist.

JT moved to Charleston in March 2020 and rode his motorcycle.

“It was a really interesting time with a lot of solitude,” he says. “As soon as I set off, I knew I wanted to do this around the whole country.”

JT, who is single, decided it was time to move closer to his family.

“The pandemic helped me decide I needed to be home,” he says.

Since Joe’s death, Julie and Josh and his family have also moved to Charleston.

When they were trying to decide what to do with Joe’s Indian Scout motorcycle, JT told his dad, “I’ve got an idea. That trip around the country — I’d like to do it on your Indian. So you’ll be with me the whole time.”

“I made that promise to him,” JT says.

From Charleston, JT plans to head toward Asheville and the Great Smoky Mountains. He’ll visit friends in Nashville, then proceed to the Ozarks for camping and riding. He’ll hit Kansas City during tornado season before riding to Colorado and the northern areas of Bryce and Zion canyons. Los Angeles represents likely the hottest stint of the trip.

He asked his dad where he should travel. Joe immediately suggested the Pacific Coast Highway, and he’ll release some of his dad’s ashes there.

JT plans to explore Big Sur, San Francisco, Portland, and the Pacific Northwest. From there, his route will go through northern Idaho, Montana, Wyoming, the Dakotas and the Upper Peninsula of Michigan. He’ll then make his way to the Northeast, before setting his sights for home down the East Coast.

“I don’t want it to be a sprint,” JT says of his trip. “I want to stop and explore areas, and go off the beaten path. I want to see friends. This will be the longest vacation I’ve ever had.”

He wants to get through the grieving process, too.

“During the time Dad was sick, you’re trying to appreciate the moment and absorb every minute you can and be present,” JT says. “You don’t get to go through the normal grief process. On this trip, I’ll be with him and I’ll be able to explore the grieving process. There’s a lot I’ll be taking on the road with me.”