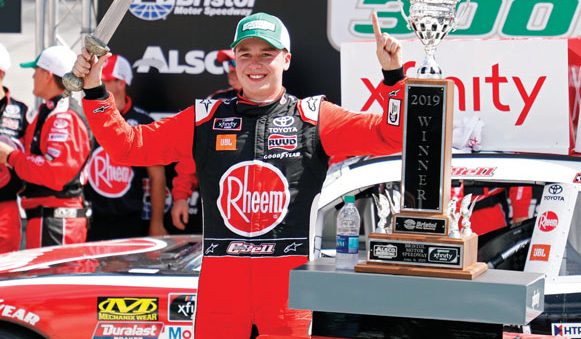 Christopher Bell got to celebrate after turning a spot start in the Xfinity Series into a trip to victory lane Saturday at New Hampshire Motor Speedway. (AP File Photo/Wade Payne)

LOUDON, N.H. (AP) — Christopher Bell had to reward the young boy wearing his T-shirt with a fist bump and the checkered flag from his third career New Hampshire victory.

Bell laughed when he said it was a rare sight at the track to find any fan wearing his merchandise. So while the Xfinity Series wins come easy for Bell, building that fanbase still needs some work.

“I don’t have a ton of shirts up here in the Northeast,” Bell said. “I haven’t done a lot of racing up here. My popularity, I’m just really calm, quiet, reserved. I’m not going to win a popularity contest but hopefully I can win more races.”

Bell turned a spot start in the Xfinity Series into a trip to victory lane, winning in a romp for Joe Gibbs Racing on Saturday at New Hampshire Motor Speedway.

Bell made his first start since 2019 in NASCAR’s second-tier series when he was needed as a late replacement driver. He won every stage in the No. 54 Toyota and captured his 17th career Xfinity race. He won seven races in 2018, nine in 2019 and was promoted to Cup last season.

Bell is 15th in the Cup Series this season driving for Joe Gibbs Racing. Bell won his first Cup race this season at the Daytona road course.

He certainly remembered how to take the checkered flag at New Hampshire, where he won in the Xfinity Series for the third time. In the Ambetter Get Vaccinated 200, Bell made the most of his shot.

“I definitely didn’t expect like I was for sure going to win,” Bell said. “I figured I would have a really good shot at it. I felt I was going to have a shot at it, for sure.”

Justin Allgaier was second, followed by Daniel Hemric, Austin Cindric and Harrison Burton.
The top-fives capped a big week for Cindric and Burton — Cindric was named driver of the flagship No. 2 car for Team Penske in the Cup Series next season, and Burton will drive for Wood Brothers Racing next season in the 21 Ford.

Bell kept the ball rolling for JGR in the Xfinity Series. Bell, Kyle Busch and Ty Gibbs have combined to win eight races in the No. 54 this season. Busch went 5-for-5 and said he was retired from the series after winning last week at Atlanta.

Bell put the Cup filed on notice he could be a factor on Sunday. He won a trophy on Saturday. Win the Cup race today, and Bell receives a live lobster in victory lane.

“I’m not crazy about touching the lobster,” Bell said. “My wife is excited about it. I will probably let her hold it.”

At least the kid had a souvenir worth saving.

“It’s really cool to see a kid wearing my T-shirt,” Bell said. “That’s really special. Hopefully, he has a lifelong memory. Man, I love this place.”