Legion baseball: It wasn’t over for Rowan County 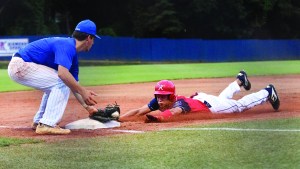 Rowan County’s Tristan Miller had the game-winning hit on Friday. Photo by Wayne Hinshaw, for the Salisbury Post.

GRANITE QUARRY — The original “It ain’t over till it’s over” is credited to New York Mets manager Yogi Berra during a pennant race 48 years ago, although what Yogi actually said was the far less dramatic and far more bizarre: “Yeah, time is running out, but you’re still not out of it until it’s automatic.”

The Mets did come back to win their division and the National League pennant in 1973,  and “It ain’t over till it’s over” somehow became an integral part of the jargon of sports. Ask anyone, and they’ll tell you that’s what Yogi said.

At any rate, down 6-2 going to the bottom of the seventh on Friday, it wasn’t over until it was over for Rowan County’s American Legion team. Rowan apparently had the Greensboro Red  Wings, who had dominated the game up to that point, right where it wanted them.

Rowan scored five times in the seventh, winning the game 7-6 on Tristan Miller’s one-out single. Miller had entered the game in the sixth as a pinch-hitter and had rapped into a rally-killing double play, but baseball is all about redemption. Miller redeemed himself.

Greensboro (7-12) has a good team, much better than its record would indicate, and beat Northern Division co-leader Randolph County on Thursday.

Greensboro came to Staton Field with just nine players but was determined to avenge a recent 9-6 loss to Rowan.

Brandon Fury, the losing pitcher in relief in that first meeting, was the starting pitcher on Friday. Rowan had a chance to get him off the mound in the bottom of the first with two walks, a hit batsman and a run-scoring single by Aiden Schenck, but Fury escaped the inning with two strikeouts, and Rowan settled for a 1-0 lead.

Then Fury settled in.

Greensboro tied the game 1-all in the second against Rowan starting pitcher Kaleb Burleyson.

Greensboro went up 5-1 in the fourth when Zander Burton relieved Burleyson with the bases loaded and was greeted by a grand slam by Rush Bowman, Greensboro’s 6-foot-2, 235-pound catcher.

Greensboro made it 6-1 in the fifth, although Rowan got that run back on Charlie Klingler’s single and Logan Rogers’ double in the bottom of the inning.

Reliever Chase Drinkard got Greensboro out in the sixth with the help of a double play.

Greensboro threatened to add more runs in the seventh against Rogers with a walk and two hits, but Rowan got the third out with heads-up defense and a Greensboro baserunning mistake.

Peyton Summerall had entered the game in the top of the seventh to play third base, part of a flurry of Rowan defensive changes, and was inserted in the ninth spot in the batting order.

Summerall walked to lead off the decisive seventh, moved to second on a passed ball and scored when Klingler’s tapper in front of the plate was thrown away. CP Pyle has been in a bit of a hitting slump, but speed never slumps, and Pyle laid down a bunt single to put two men on. When Pyle took off to steal second, an errant throw resulted. Klingler scored to cut the deficit to 6-4, and Pyle kept rolling to third.

Greensboro turned to its bullpen — third baseman Grayson Southern — with Fury moving over to third base. Southern gave up a solid hit to Rogers, and it was 6-5.

Dylan Driver bunted, resulting in chaos. When the smoke cleared, Driver was at second and Rogers was at third. Schenck was walked intentionally to fill the bases, which made a lot of sense. Schenck’s been hot and the youngster behind him, Jacob Causey, had struck out looking three straight times on Friday.

Causey also redeemed himself. He was able to put a 3-and-1 pitch in play — grounding out to shortstop — as Rogers came home with the tying run.

Austin Fulk was walked intentionally to reload the bases. Then Miller smacked a 3-and-2 pitch through the left side, and Rowan had pulled it out.

As it turned out, it was never over.

It appeared Rogers was just getting some work in on the mound in the seventh to stay sharp for the playoffs, but he ended up getting the win.

Clay Edmondson and Garrett Schmiederer had three hits each for the Red Wings.

Rowan (11-3) has won six in a row and plays a non-division game at High Point on Saturday at Finch Field at 6 p.m.

Rowan wraps the regular season on Sunday at Kannapolis.

Rowan will be home for a Tuesday playoff game against whoever finishes second in the Northern Division.

$72 million extension over four years for Moton with…