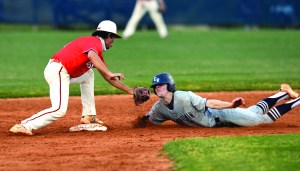 LEXINGTON — The Carson Junior Legion team is headed for the second round of the playoffs.

Carson (19-2) won the first game of the series on Thursday 9-0 behind the pitching of Emory Taylor, Casey Crawford and Ben Grubbs.

A bases-clearing double by Cody Russell was the key hit.

Carson will play the winner of the High Point-Mount Airy series next.

Legion baseball: It wasn’t over for Rowan County