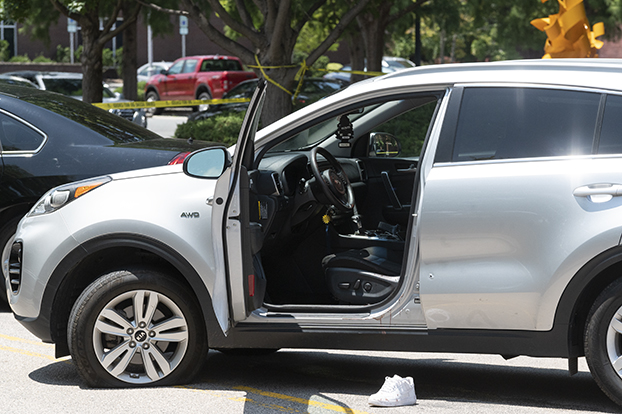 Josh Bergeron / Salisbury Post - A man who was shot drove to the Salisbury Police Department for help Thursday. Blood stains the shoe that's on the ground. There's a bullet hole in the rear passenger door and a flat tire.

SALISBURY — A man was shot around 11:50 a.m. Thursday and transported to an area hospital after driving to the Salisbury Police Department for help.

Police say 19-year-old Salisbury resident Sincere J. Houston drove about one-third of a mile from the 700 block of North Lee Street to the police department, which is at the intersection of North Lee and West Liberty streets.

Houston ran into the lobby of the department and received first aid from officers until Salisbury Fire and Rowan County EMS arrived. He was transported to the hospital with injuries that were not considered life-threatening.

In the 700 block of North Lee Street, police surveyed the area for shell casings.

In front of the police department, a silver Kia SUV was in the middle of North Lee Street with its driver’s door open and a flat front tire. One white shoe was on the floorboard of the driver’s side. Another bloodied, white shoe was next to the car in the roadway.

Dried blood stains also could be seen on the stairs leading into the Salisbury Police Department. A handgun could be seen in the center console.