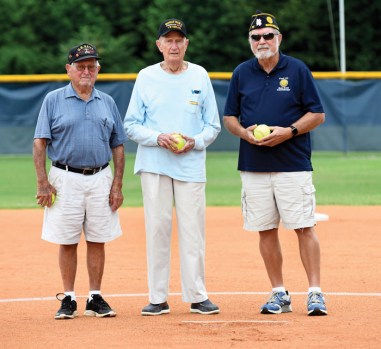 A parade of Rowan veterans lining the infield with the Rowan girls legion players on the first base line. photo by Wayne Hinshaw, for the Salisbury Post 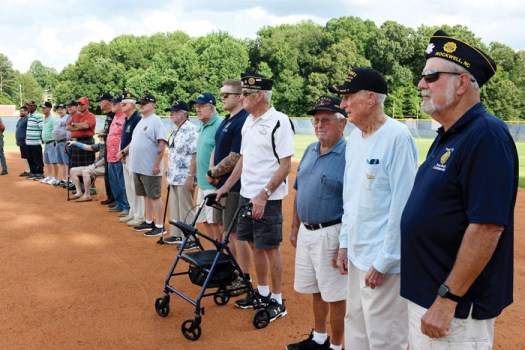 A parade of Rowan veterans lining the infield. photo by Wayne Hinshaw, for the Salisbury Post 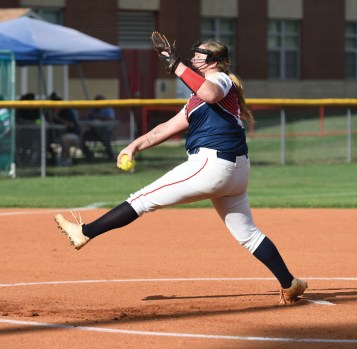 Rowan pitcher Haley Strange was an East Rowan standout who is on the Lady Legion squad.. photo by Wayne Hinshaw, for the Salisbury Post 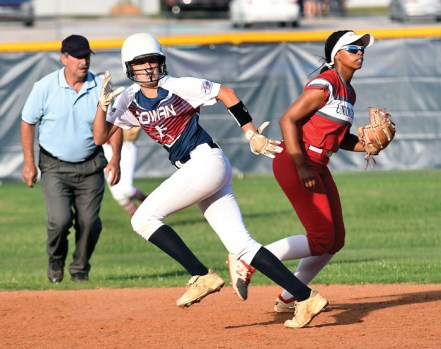 Rowan's Ellie Wilhelm 4 running to 3rd base.. photo by Wayne Hinshaw, for the Salisbury Post 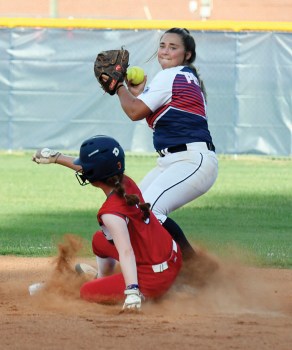 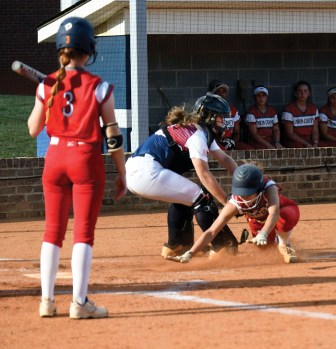 Rowan catcher Makayla Johnson 12 tags the Union County runner out at the plate. photo by Wayne Hinshaw, for the Salisbury Post

A Union County runner was safe at 3rd base as Rowan's Allie Burns 7 tries to block the ball. photo by Wayne Hinshaw, for the Salisbury Post

GRANITE QUARRY— Todd McNeely helped piece together Rowan County’s tentative first plunge into the Lady Legion softball world back in 2017 when the team made its debut at Carson in front of a sea of curious fans.

Lady Legion was shut down completely by COVID last summer, and there was no softball replacement product for the girls like the NC3 baseball that filled in for Legion baseball at Newman Park.

It’s been almost like starting from scratch all over again, but Rowan County’s Lady Legion team has made it back on the softball field this summer, with some of the original girls from 2017, older and wiser, still on hand.

Home doubleheaders now are played at East Rowan, where McNeely, who is now East’s head coach, spends most of his free time working on fields and batting cages. The team is officially Post 112 (Rockwell).

“We’ve been able to get the Lady Legion team back together,” McNeely said. “We’re still working on getting the whole county involved. And there’s still work to do as far as all the Lady Legion teams working together. It takes full cooperation from everyone. We had a team cancel on us because their girls were tired. That’s not how it works. You set a schedule and play the schedule.”

Obviously, there have been growing pains. With all the good softball players in Rowan County, the team has a modest 6-7 record after losing two close ones at home on Tuesday to Union County and winning two at Mint Hill on Wednesday.

“We had some people thrown out on close plays on the bases, and Union has a very good team,” McNeely said. “Piedmont High School had one of the best teams in the state.”

The highlight of Tuesday’s proceedings was honoring veterans prior to the game,

“We had 25 or 30 veterans come out and the girls escorted them on to the field prior to the game for some well-deserved recognition, and we fed them a meal,” McNeely said.

Two of those veterans were World War II vets in their late 90s.

Jim Deal, a tank gunner, fought in the Battle of the Bulge. Glenn Hoffner, a sailor, served in the Pacific.

About 16 million Americans served in uniform in World War II, which ended 76 years ago, and the number of survivors is estimated at  320,000 nationwide. So to have two in one place at the same time was a special occurrence.

“Our Junior team members were getting food for the veterans, and I told them that those men did a great service for us and now we had a chance to serve them in a small way,” McNeely said. “Jim Deal served under General (George) Patton, and I told the girls if they didn’t know who Patton was they needed to look it up when they got home.”

The Rowan roster basically has the East Rowan squad, including star pitcher Haley Strange and hard-hitting infielder Mac Misenheimer, plus many of the familiar Carson standouts, such as Kary Hales, Ellie Wilhelm, Allie Burns and Makayla Johnson. Salisbury graduate Ellen Yang is on hand, just as she was as a youngster in 2017. The team has a few players from West Rowan and Gray Stone.

Abbey Nixon, a Carson rising senior and a Lenoir-Rhyne commit who was Rowan County Co-Player of the Year, would have been a big part of this team, but she tore an ACL competing with Carson’s track and field team.

“As soon as she was able to move around, she started coming out here to support the team,” McNeely said. “But not having her on the field hurts.”

The Rowan team is scheduled to play Kannapolis at home at 6 p.m. on Thursday. Rowan will be part of the playoffs that are set to begin next week.

While this season has been mostly about keeping the program alive, the future is bright for Rowan.

“Our Junior team has only lost one game,” McNeely said. “They’re really strong.”