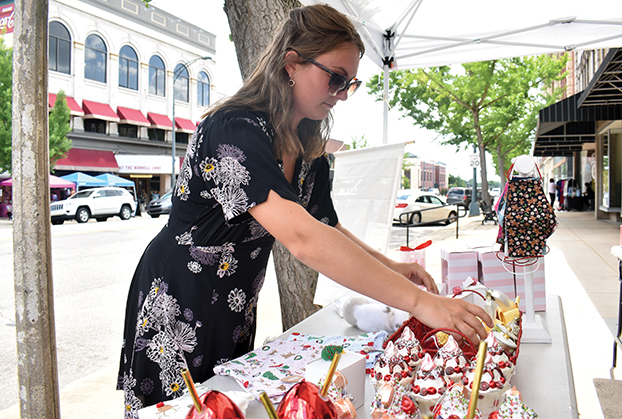 Carson Davis arranges items on sale outside of Caniche, one of the businesses offering big discounts this year during Krazy Klearence. Ben Stansell/Salisbury Post

SALISBURY — Eric Killeen didn’t come to downtown Salisbury on Wednesday expecting to do any shopping, but he left with a drill, box of nails and Halloween masks in tow.

Killeen and his wife, who live in Cleveland, were visiting downtown for a regular shopping trip when Killeen unwittingly stumbled upon Downtown Salisbury’s Krazy Klearance sale.

The annual sale, held the third weekend in July, gives customers a chance to take advantage of deals and gives businesses a chance to offload excess inventory in anticipation of the fall season. Krazy Klearance has been held every summer for several decades, including during the COVID-19 pandemic last year. The sale will last through Saturday.

“It’s one of our economic drivers for our downtown and city,” said Latoya Price, interim Downtown Development Director for Downtown Salisbury Inc. “This event is very important because it brings people from not just Salisbury into downtown to support our local merchants, and our restaurants as well.”

While his wife shopped at the boutique next door, Killeen found himself searching through the bins outside of the Meroney Theater, which were filled with old costumes, decorations and set pieces from the theater’s basement.

“You come down here. You’ve got a Halloween costume,” Killeen said.

Although he was proud of the spooky masks and decorations he bought, Killeen was most excited about the deal he got on a used DeWalt drill — a $20 purchase.

Killeen wasn’t the only customer hunting for bargains on Wednesday, the first day of the four-day shopping extravaganza. Constance Ebomah, owner of the newly opened Chilliaya Gene Boutique at 203 South Main St., said she had more customers in her shop than usual Wednesday.

“I didn’t expect downtown to be this busy,” Ebomah said. “If I had realized how busy it would be, I would’ve set up outside, but I’ll probably set up outside on Saturday.”

Ebomah is one of about a dozen shop owners who are offering discounts during the event. Since she opened the boutique just last month, Ebomah said her inventory is too new to discount too much. Still, she attached bright tags on almost every outfit in the store, most of which are between $15-20 off.

For Shelly Lowder, who owns Sweet Country Style Boutique at 105 West Innes St., the Krazy Klearance sale is an opportunity to offload some of the items leftover from the COVID-19 pandemic.

“Especially coming out of COVID, a lot of us closed down for a couple weeks, and it’s nice now to be able to try to get rid of some of that inventory,” Lowder said.

Lowder was at her store around 8:30 a.m. on Wednesday morning to set up tents outside. The store is offering up to 60% off some jewelry, shirts, shorts and other items. Lowder said she expects there to be plenty of people stopping by the store to complete their back-to-school shopping, which was a tradition many folks skipped due to virtual learning last year.

“People are starting to go back to school in person now so they’re starting to shop more for back-to-school items and things like that,” Lowder said.

Sweet Country Style will celebrate its second anniversary on Saturday, the final day of the sale. Lowder plans on having donuts, special drawings and more festivities to commemorate the occasion.

Bailey Overcash, sales associate and social media manager for Oxford+Lee, described the first day of the sale with one word.

“It was crazy,” Overcash said. “We did really, really well.”

Overcash said the store surpassed its sales from the first day of Krazy Klearance last year. The upscale apparel store, which offers men’s and women’s items, is selling items anywhere between 30-75% off.

With his guitar in hand, Colton Sherrill was singing and playing tunes outside of Rowan Cellular Repair on Wednesday afternoon. He’s one of several musicians that will bring some entertainment to Krazy Klearance this year. 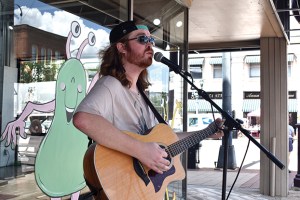 “We added a busker component last year,” Price said. “I think it went very well so we decided to add it again this year.”

To enter for a chance to win $100 in Krazy Klearance Bucks, shoppers can visit any of those stores, fill out a form and drop it in a bucket located inside the stores. Three winners will be drawn on July 23. The Bucks must be spent in any of the participating contest stores before Oct. 31.

More information on the sale can be found online at downtownsalisburync.com.

Back in the classroom: Teacher of the year takes…