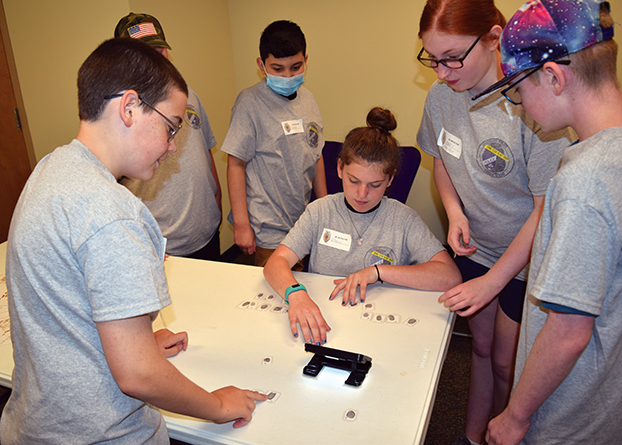 SALISBURY — When 25 campers showed up to the Salisbury Police Department’s Crime Scene Camp on Wednesday morning, most of them were practically strangers.

“When everybody comes in, they’re so shy and quiet,” said Victoria Young, a camp instructor and crime scene investigator for the Salisbury Police Department.

But during the next few hours, the roughly two dozen campers, ranging in age from 11 to 15, quickly bonded while dusting for fingerprints, surveying the ground with metal detectors and making plaster shoe print castings.

“By the end of the day, these kids act like they’ve known each other their whole lives,” Young said.

Creating connections while educating youth on the intricacies of forensic science is exactly why the Salisbury Police Department launched the Crime Scene Camp three years ago.

The camp, which was announced and advertised on the Salisbury Police Department Facebook page, is always free of charge and open on a first-come, first-serve basis. Jay Basinger, a Salisbury Police detective and facilitator of the camp, said it only took two days for all available slots to fill up this year.

After altering the camp’s schedule last year due to COVID-19, the Salisbury Police Department hosted two half-day camps this summer. The first was held on June 23 and the second was held Wednesday. Both had 25 campers and at First Baptist Church’s First Ministry Center at 220 N. Fulton St.

The building, formerly home to the YMCA, was perfect because it allowed Young and Basinger to set up different crime scene stations in various classrooms, each with its own educational lesson. Young taught campers how to use magnetic brushes to lift and take fingerprints. Basinger led a class on using lasers to reconstruct the path of a bullet using lasers and fog.

“What we’re teaching here is what we actually do,” Basinger said.

The campers also utilized a chemical called luminol to examine synthetic blood splatter, translated morse code to English and used UV light to detect seemingly invisible fluids in a dark room. To make the experience as realistic as possible, Young and Basinger allowed campers to use the very same equipment they use in the field on an almost daily basis. 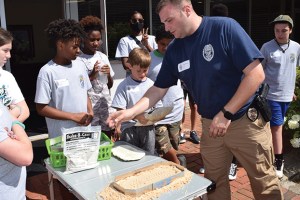 The forensic exercises were a challenge for Josiah Gilbreath, but the 12-year-old said the payoff of cracking the case was worth it.

“Forensics is difficult, strenuous, and at times confusing, but it all comes together for a serotonin boost when you finally finish it,” Gilbreath said.

Activities weren’t restricted to the indoors. Campers ventured outside for a demonstration on shoe casting, to conduct metal detector sweeps and to practice outlining a crime scene with, including a victim’s body.

“I explained to them, when we’re out on the scene, sometimes you have to take measurements,” Young said. “You have to use fixed points and so we showed how to do that with different objects out and the grass from a body.”

Mary Kathryn Aycock, 14, happily volunteered to play the victim for the exercise and was proud of her “dramatic death scene.” Aycock said her interest in forensics was piqued after watching criminal show on TV and playing murder-mystery games. The camp, she said, reaffirmed her inclination for detective work.

Marielle Gordon, 15, said the camp gave her an opportunity to meet others like Aycock who are just as interested in forensic science as she is. Gordon, an avid watcher of the popular TV crime drama NCIS, said the camp made her more interested in an already intriguing career in fighting crime. 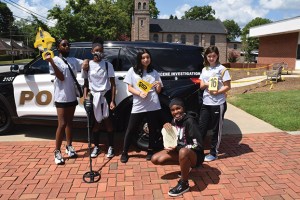 Hearing campers say they are considering pursuing a profession in forensics, Young said, is a rewarding feeling.

“We have several who are interested and want to do it,” Young said. “I hope that we have photos of them at camp and we can shoot forward 10 or 15 years later and we can hire them and I’ll get to work with them in the future actually doing forensics at the department. That would be cool.”

In addition to providing lunch for campers, the Salisbury Police Department gave them shirts, stickers and goodie bags to take home. The Crime Scene Camp was made possible by a donation from the Blanche and Julian Robertson Family Foundation.

The Salisbury Police Department plans on hosting the crime scene camp next year. Basinger said he is already pondering adjustment he can make to keep future camps fresh for any returning campers.