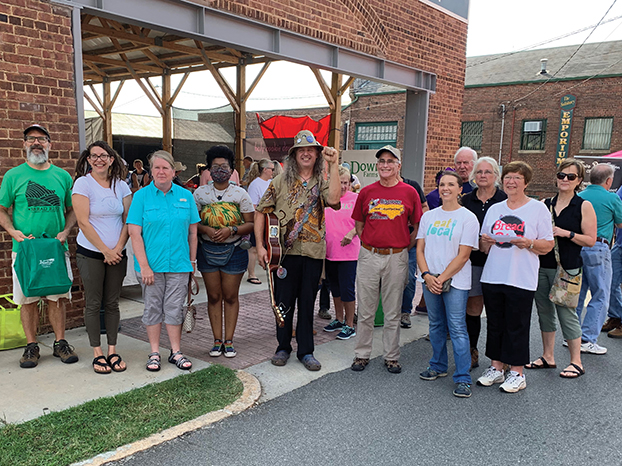 SALISBURY — Since taking a beekeeping class at the Rowan County Extension Office about eight years ago, Mark Heuser has been fascinated with the intricacies of keeping bees.

Heuser, a physician at the Salisbury VA Medical Center, maintains about 18 hives and sells the honey he collects at the Salisbury Farmers Market. Now, he’s received a grant from the nonprofit Bread Riot and plans on expanding his efforts while also sharing his passion for the pollinators.

Heuser was one of five local producers who received $500 grants this weekend from Bread Riot, a nonprofit organization dedicated to supporting local farmers and providing access to foods produced in Rowan County. Funding for the grants was provided by the Robertson Foundation and the St. Luke’s Episcopal Foundation.

“It’s to encourage our small farmers and give them a little push, a little help to do something that they wouldn’t have been able to do otherwise,” said Dottie Hoy, Bread Riot’s president.

In addition to Heuser, grant recipients include Mikell Reynolds with Two Pigs Farm, Stephanie Frisbee with Hopeful Acres Farm & Gardens, Onyca Perry with Boho Momma All Natural Living and Megan Davidson with Home Grown with Love. The grant recipients received their checks at the Salisbury Farmers Market on Saturday.

Hoy said the organization has given out grants to farmers for several years, but it’s never distributed as many as this summer. Grant applicants needed to provide a detailed explanation of how they plan on putting the money to use.

With the funding, Heuser plans on investing in equipment to raise his own queen bees and to buy a display hive he can bring with him to the farmers market and other festivals.

“As a beekeeper, you’re expected to not only keep bees, but help educate the public on bees and the importance of them,” said Heuser, who said he donates his honey profits to local charities.

For Davidson, the grant represents an opportunity to grow Home Grown with Love, a business she started a little over a year ago.

As a stay-at-home mom, Davidson was looking for a way to provide healthy foods to her family and community. That’s why she started growing nutrient-packed microgreens in a room within her home, which is near the Salisbury-Spencer line. She’s since expanded her efforts into a big backyard garden, where she’s growing everything from tomatoes to corn on less than 1 acre of land. She also sells homemade tie-dye shirts.

With the $500, Davidson will pay rental fees to attend upcoming events and will buy a new pop-up tent.

One of the events Davidson plans on attending is Bread Riot’s Riot at the Brewery, which will be held Aug. 21 from 4-9 p.m. at New Sarum Brewery. The fundraiser will feature live music, food and several local vendors.

“I feel like my business has started from the ground up and I feel like it has really progressed in this past year,” Davidson said. “This $500 will really help to progress things.”

Like Davidson, Perry plans on using the grant funding to expand her business, Boho Momma All Natural Living, which specializes in toxin-free home cleaning products such as soap and dishwasher tablets. Perry will use the money from Bread Riot to purchase compostable and reusable packaging for her products.

“This grant will really help branching off in that direction to be a more sustainable company in general,” Perry said.

In addition to selling her soaps at the Salisbury Farmers Market, Perry’s products are carried by stores such as Main Street Marketplace.

The Bread Riot funding will be particularly critical to Stephanie Frisbee, who started growing flowers on her family’s century farm in China Grove in 2016. Frisbee sells her flowers along with the meat harvested on her family’s farm under the brand Hopeful Acres Farm & Gardens at the China Grove Farmers Market. Her slogan is “beef and blooms.”

The $500 from Bread Riot will allow Frisbee to construct a well house around her 600-foot well, which she uses to irrigate her flowers. In the well house, Frisbee will install a sand-separator to prevent sediment from clogging her filtration systems.

“It’s important because I’m going to be able to irrigate more efficiently and it will be able to carry more water to my flowers, especially now when it’s very hot and we have a drought,” Frisbee said.

Two Pigs Farm, Hoy said, intends to use its funding to improve its egg-laying efforts. Two Pigs is a staple vendor at the Salisbury Farmers Market, selling meat and produce.