College baseball: Love picked in the third round by Cardinals 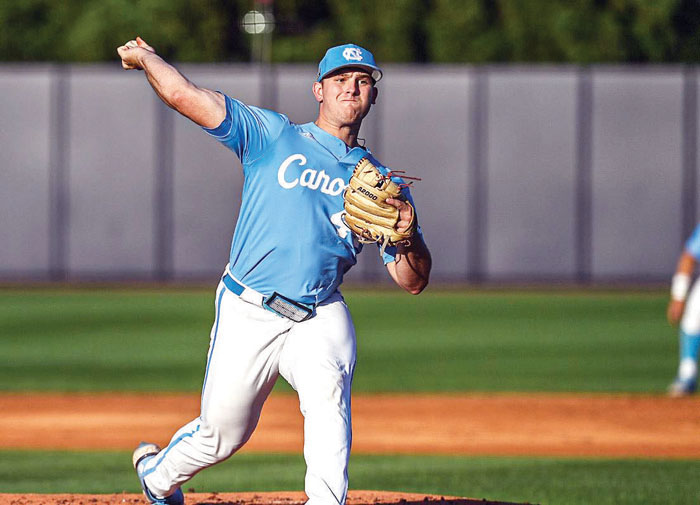 Submitted photo North Carolina pitcher and West Rowan alum fires to the plate during a recent game. Love has been picked in the third round of the Major League draft by the St. Louis Cardinals.

CHAPEL HILL — The dream for every baseball player is to hear his name called in the MLB draft, and 2017 West Rowan graduate Austin Blake Love experienced that thrill around 3 p.m. on Monday.

A workhorse right-handed pitcher for the University of North Carolina, Love was selected by the St. Louis Cardinals in the third round.

Love, who has grown considerably since his West Rowan days to 6-foot-3, 232 pounds, was the 90th pick. He has thick, powerful legs and the shoulders of an NFL tight end.

The 90th pick carries a recommended signing bonus value of $657,600, and while that’s a ballpark figure set by MLB, it’s negotiable. Liam Norris, a high school pitcher from North Carolina, was the 90th pick in 2020 by Arizona and received a signing bonus of $800,000.

Since there was a universal redshirt for the abbreviated 2020 season, Love still has two years of eligibility with the Tar Heels, so he has some negotiating leverage and the viable option of returning to school.

But he’s also 22.5 years old. That’s a consideration when it comes to getting his pro career started in a business where the clock is constantly ticking.

He also was an infielder when he wasn’t pitching and was a capable hitter. His most memorable swing was a three-run, walk-off homer that beat Carson in the championship game of the 2016 South Piedmont Conference Tournament.

During the winter months, Love proved to be a major asset for West basketball teams. He was never a prolific scorer (5.8 points per game as a senior), but he was a terrific rebounder.

Love was ranked as the state’s ninth-best pitcher when he graduated from West, but he still had some developing to do physically and was a redshirt his first year at UNC.

He returned to the mound in the summer of 2018 and made the all-star team pitching for the Baltimore Redbirds in the Cal Ripken Collegiate Baseball League.

By the early spring of 2019, Love was ready to make an impact for the Tar Heels and turned in a spectacular freshman season. He was 8-4 with five saves as a relief pitcher, working in 36 games and logging 67 strikeouts. He turned in a dominant Super Regional outing to beat Auburn and was named to the Freshman All-America second team.

Love followed up that breakthrough with more success in the prestigious Cape Cod Baseball League in the summer of 2019, impressing MLB scouts.

The 2020 season, unfortunately, was crushed by COVID. Love pitched in eight games and was 1-0 with one save.

Love had turned 21 and was draft-eligible in the summer of 2020, but with the draft shortened to five rounds, his name wasn’t called.

Love made a conversion to the starting rotation in 2021 and carried a short-handed Tar Heels’ pitching staff.

He was 10-4 and his 129 strikeouts were the second-highest total for a single season in program history. With one more start, Love would have topped Andrew Miller’s 133 in 2006. Miller is currently a member of the St. Louis Cardinals’ bullpen.

Love’s fastball was clocked as high as 98 mph during the season, although he generally works in the mid-90s. He throws a slider in the mid-80s and experienced considerable success with that pitch. He also mixes in some changeups.

Love’s complete-game 5-1 win against eighth-ranked Louisville on May 14 got UNC back to the .500 mark and probably was the turning point in UNC’s season. Love struck out nine. The only run he allowed was a solo homer by Louisville catcher Henry Davis, the first pick in the draft.

Six days later, Love was even better against Georgia Tech. He struck out a career-high 15 and walked none in a 3-2 victory.

Love struck out five of the first seven hitters he faced in beating N.C. State in the ACC Tournament. That win made the difference as far as the on-the-bubble Tar Heels getting a bid to the NCAA Tournament. That was Love’s ninth win of the season.

His 10th victory came in the NCAA Tournament against UCLA in Lubbock, Texas, Love retired 13 straight Bruins at one point. He worked into the seventh inning and whiffed nine, the most strikeouts by a UNC pitcher in a regional game in 10 years.

Love struck out 10 or more batters four times and led the ACC in wins and innings pitched (102). He was second in the ACC in strikeouts.

Love was named first team All-ACC. He was one of four starting pitchers named to the All-Atlantic Region team.