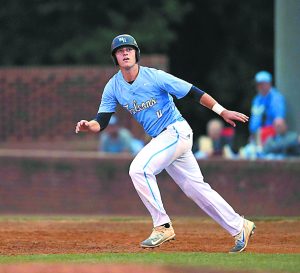 Austin Love in his West Rowan days. Photo by Wayne Hinshaw, for the Salisbury Post.

The West Rowan product was picked in the third round.

That pick carries a recommended slot value of $657,600, and while that’s a ballpark figure, it’s negotiable.

Liam Norris, a high school pitcher from North Carolina, was the 90th pick in 2020 by Arizona and received a signing bonus of $800,000.

Love still has two years of eligibility with the Tar Heels, so he has some negotiating leverage and the option of returning to school.

Love was the ace for the Tar Heels during the 2021 season. His 10-4 record included several huge wins and he posted 129 strikeouts, the second-highest total in program history for a single season.

Love was first team All-Atlantic Coast Conference and was one of four pitchers named to the All-Atlantic Region team.