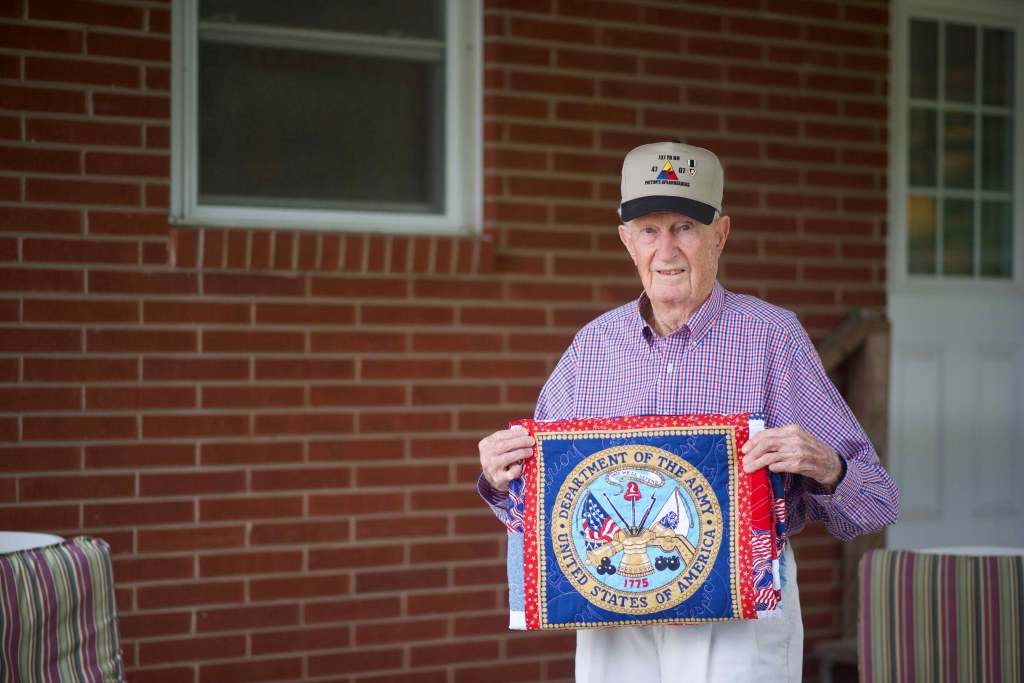 SALISBURY — Last week, the Salisbury-Rowan quilt guild added 10 more veterans to its list of recipients, bringing the total to 34 this year.

In that group was 98-year-old Jim Deal.

The Rowan County native was drafted into the Army’s 737th tank battalion in 1942. Deal saw combat during World War II and served in one of only a handful of tanks equipped with a Howitzer artillery gun. The Battle of the Bulge was one of the battles he participated in. His tour of duty ended when he was injured by a trip mine.

The mine sent shrapnel through his legs, which required treatment in England. He was on a boat back to the U.S. when the war ended. He received a Purple Heart.

Deal’s daughter, Melissa Waller, signed the World War II veteran up to receive a quilt, but he was still surprised when he learned he’d receive one.

Deal said it made him feel good to find out the guild is donating quilts to veterans.

The latest group of recipients contained veterans who served in conflicts throughout the 20th century, including Vietnam and Korea, and in a number of roles and branches. All received multiple awards for their service.

Most of the veterans from this round served in the Army, including John Pharr, Daniel Haddock, Greg File, Carl Wilson, Ron Main, Kirby Ritchie and Deal. The other recipients were George Sprague and Ralph Johnson of the Air Force as well as Buck Hamrick of the Marine Corps.

The quilt guild works with the Rowan County veterans coffee group that meets Tuesday mornings. While it previously called Thelma’s Down Home Cooking and West End Plaza home, it moved to K&W Cafeteria, both of which closed. Interest waned during the COVID-19 pandemic, but the group is now meeting at Christiana Lutheran Church.

Troy Horton, a Navy veteran who helps organize the group, said interest has picked up as the pandemic has receded and vaccines became available. Recent meetings have seen about 70 to 80 attendees. Christiana lets the group use its fellowship space in the morning. The Hotdog Shack furnishes food for the group at cost.

Horton, a quilt recipient himself, said veterans who receive the patriotically patterned pieces are thankful.

Janet Oliver organizes the quilt program for the guild as one of its community service projects. Oliver, an Army veteran herself, said it’s something she wants to do for fellow service members.

“It’s not about the quilt guild; it’s about the veterans,” Oliver said.

Veterans apply to receive the quilts. Oliver said many veterans are given applications by people who go to church with them.

Giving Deal a quilt made this round of presentations extra special. When Oliver handed him his piece, she was trembling.

“I told him I was honored to give him this quilt,” Oliver said.