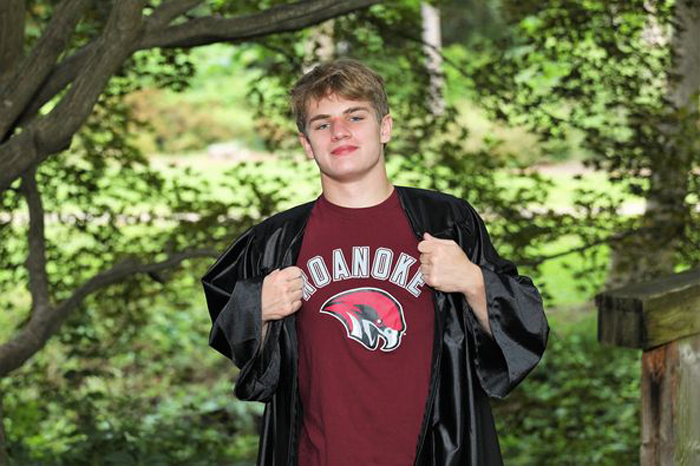 SALISBURY — Trey Wilhoit’s senior wrestling season got off to a worst-case scenario start with back-to-back concussions.

“Just got hit in the head wrong and missed some of the early matches,” Wilhoit said. “And it was going to be a condensed season to begin with.”

Salisbury High’s 160-pounder managed to turn adversity into something positive.

When wrestling was taken away for several weeks, it became even more important to him.

“When I did finally get a chance to get back into the wrestling room, it was like I had a fire lit under me,” Wilhoit said. “We didn’t get to wrestle in any tournament and not having a county tournament was a bummer. But it still turned out to be a pretty amazing season.”

Wrestling for head coach Shane Miller, Wilhoit lost only one league match — that was an under-the-weather setback against Oak Grove. He did enough to make the All-Central Carolina Conference team. The CCC didn’t hold a conference tournament.

Wilhoit had a bye in the first round of the 2A Midwest Regional at Cabarrus Arena, but he lost in the quarterfinal round and finished his shortened season with a 9-2 record.

“I had an off day in the regional, definitely didn’t wrestle my best,” Wilhoit said.

The good news is Wilhoit’s wrestling career isn’t over. It will continue at Roanoke College in southwestern Virginia.

It’s a brand new wrestling program. Roanoke announced the addition of the sport in January 2020. The Maroons will begin their first season of competition this fall. Nate Yetzer, who previously was the coach at Ferrum, was placed in charge of getting things off the drawing board and onto the mat for Roanoke.

Roanoke competes at the Division III level athletically, but it’s a school with about 2,000 students and offers 35 majors.  It’s located in a nice area of the state, with the Blue Ridge Mountains right out the window. Virginia Tech is about 30 minutes away.

Wilhoit, an Eagle Scout who possesses some construction skills, is an excellent student and impressed Roanoke’s coaches when he attended a prospects camp.

“Honestly, I knew almost from the moment I set foot there that it was where I wanted to go for the next four years,” Wilhoit said. “Great coaches, great school and beautiful campus.”

Wilhoit has gotten advice about Roanoke from Alex Weant, Salisbury High’s 6-foot-7 science teacher. A decade ago, Weant headed from Salisbury to Roanoke to play college basketball. He was able to compete for more years in a sport he loved, and he earned a degree.

“Mr. Weant had good things to say about the school and I haven’t found anyone yet who’s had anything bad to say about it,” Wilhoit said. “I know this is one of the biggest choices I’ll make in my life, but I’m sure it’s the right place for me.”

Wilhoit got started with wrestling long ago. A recruiter for the local youth program came by his elementary school, and Wilhoit caught the wrestling bug.

“The sport caught my attention right from the start,” Wilhoit said. “And along the way I learned a lot from some great coaches — Coach (Bill) Waycaster, Coach (Tim) Pittman and Coach Miller. I wouldn’t be where I am today in the sport without them and without my parents. They’ve always supported me in the sport.”

Wilhoit began his wrestling career at North Rowan. He transferred to Salisbury prior to his junior season and was Rowan County champion at 152 pounds as a junior during the 2019-20 season.

Wilhoit says he’s changed his mind about his future career several times in the past year, but he’ll head to Roanoke with the plan of  majoring in actuarial science.

Sounds like a unique major for a unique young man.

Clutch save: Father of pitcher helps save fan with…